On the Migrant Trail, a Refugee Movement Emerges

Central American asylum-seekers on a refugee caravan are part of an emerging regional social movement for forced migrants. 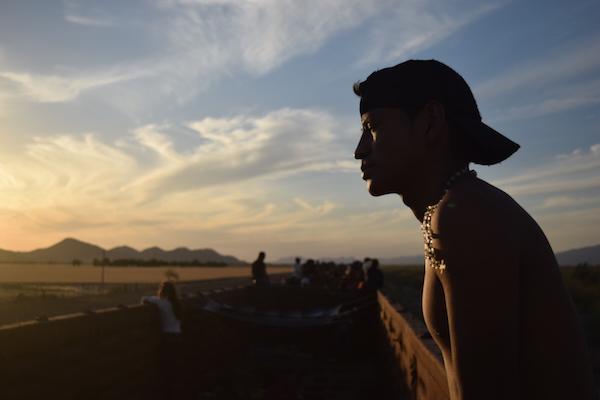 We met Boris [name changed] at a migrant detention center in Adelanto California during the summer of 2017.  He fled El Salvador after the MS-13, the gang that controlled his neighborhood, accused him of treason for paying extortion fees to its rival Barrio 18 at his workplace in another part of town. With no place to seek protection in El Salvador, he joined the Viacrucis de Refugiados 2017, a refugee caravan of 300 migrants and refugees, activists, international observers, and lawyers who traveled northward across Mexico in April and May 2017. When they reached the U.S.-Mexico border, 78 Central American and Mexican participants, including Boris, requested asylum in the United States.

But receiving asylum in the United States is often only possible after facing detention for up to six months, even when entering through official checkpoints and turning oneself into authorities. Following his arrest by U.S. Immigration and Customs Enforcement (ICE), Boris arrived at the Adelanto Detention Facility in San Bernardino County, California, where he is still in custody today. Within a month’s time, he and other detained members of the Viacrucis caravan helped organize hunger strikes to protest the facility’s appalling conditions, the unrealistically high bonds of up to $50,000, and the denial of medical attention, which resulted in three deaths in 2017.

As asylum-seekers continue to face detention at the hands of U.S. Border Patrol, the actions of the asylum-seekers on the Viacrucis caravan serve as a roadmap for building a transnational refugee movement from within the confines of detention centers.

Organizers of the caravan, a group of activists and lawyers, sought to challenge the U.S. Border Patrol’s illegal practice of turning away migrants fleeing persecution in their home countries, a violation of the non-refoulement principle enshrined in the 1951 Refugee Convention, which states that a person who faces credible fear of persecution in their home countries cannot be sent back. Though the Obama administration made it hard for asylum seekers by denying them bond and via other coercive mechanics, since Trump took office there have been cases of officials turning hundreds of people away at the port of entry and telling them that there is no more asylum. While doing research in Tijuana we noticed hundreds of people camping outside of the port of entry who have been denied the right to apply for asylum. In recent years, many Central Americans have been literally deported to their deaths.

For 28 days, Viacrucis participants traveled northward from Ciudad Hidalgo in the state of Chiapas to Tijuana. In unison, women, men, unaccompanied minors and entire families marched, sang, and chanted: “¡manchadas de sangre están las fronteras, porque ahí se mata a la clase obrera!” (“The borders are stained with blood, because there they kill the working class!”)

Through collective action, the migrant members of the Viacrucis demanded their right to seek asylum. Some of them only became aware of their rights as refugees through participation in the Viacrucis by sharing how experiences of material deprivation were shaping their fears of persecution. Legal assistants led pedagogic meetings that informed participants of their rights, and the possible costs of seeking asylum in the United States (detention and family separation, among others).

At the same time, participants empowered themselves through direct action. They rode atop La Bestia, which has recently been sped up to discourage migrants from riding it, for most of the journey across Mexico. In this dangerous act of collective resistance, they reclaimed a key resource formerly available to impoverished refugees, but one which the Mexican state has made increasingly inaccessible since the 2014 child migrant crisis as part of Programa Frontera Sur, the Southern Border Program. Despite promising humanitarian relief to undocumented migrants in transit across Mexico, the program has exacerbated the risks of travel by driving people away from historic migrant trails, and by enclosing them in areas where they are most vulnerable. For those migrating through Mexico, the Viacrucis caravan to the United States symbolized an alternative for asylum-seekers to an unwelcoming Mexico rigged with violence.

In fact, the Viacrucis represented more than a means to obtain temporary freedom from outright violence: the caravan allowed for a critical process of concientización, or awareness-raising, for its participants along the migrant trail. During the process, asylum-seekers met with local communities in Mexico, including those displaced and dispossessed by mining companies, infrastructure projects, and agro-industrial businesses. This allowed both groups to express solidarity with one another throughout the journey. Conversations between refugees and other people fighting displacement allowed different groups to see that they are fighting against and fleeing from a system rather than individual oppressors.

The stories of those traveling on the Viacrucis caravan are complex and varied. Some spoke about the lack of jobs and the general state of poverty in Mexico and Central America that had driven them to emigrate, while others focused on transphobia, homophobia, and domestic violence. Many stated that they could not leave their homes for fear of being killed or taxed by gangs or by state security forces. Some were coerced into gang activity. In other words, these asylum-seekers were not simply “economic migrants” looking for a better life. Violence of myriad forms was a common thread to all their stories.

Even as the rates of migrant detention and deportation in both the United States and Mexico have reached unprecedented levels in the last decade, refugees continue to expose themselves to the perilous journey across Mexico.  In the case of the Viacrucis participants, their struggle to cross Mexico has re-appropriated itself as part of an emergent Mesoamerican refugee social movement. It is not surprising that many Viacrucis participants who ended up in detention at Adelanto played critical roles in organizing with their fellow detainees.

The strikers at Adelanto, who referred to themselves as the Adelanto Nine, first announced their hunger strike on the morning of June 12, 2017 as a protest of the ongoing egregious conditions such as physical and psychological violence and medical neglect. And two days later, 33 women launched a hunger strike of their own in the facility. Insisting that authorities treat them “like humans, not animals,” they demanded better medical care, fair bond amounts, and reunification with their children and families. During the third strike organized by the Adelanto Nine, a group of at least 20 Haitian immigrants joined in. Authorities responded to these peaceful actions with solitary confinement, arbitrary violence, and outright denial that the strikes ever took place, according to detainees, activists, lawyers, and our own field research.

The hunger strikers’ experiences of empowerment and solidarity despite such repression defy common representations of refugees’ helplessness at the hands of the state. Indeed, the ability of the Adelanto Nine to see beyond their own dire situation and to reach out to other immigrant communities struggling to defend their rights in the face of abuse suggests an emergent refugee solidarity movement.

The cross-regional solidarity among Central Americans and Haitians —people from the two poorest regions in the Western Hemisphere— from within the entrails of the migrant detention regime has started to catch the attention of a broader migrant, refugee, and Black social movement in the United States, Latin America, and the Caribbean. Moreover, the hunger strikes –which have ranged from large actions involving significant contingents of Central Americans and Haitians to small ones involving a handful of detainees—raise further awareness about the injustices refugees face in detention, beyond what the organizers of the Viacrucis imagined at the start of their journey.

In this process, many refugees-turned-activists have expressed their desire to participate in organizing future mobilizations, and even those who have been deported are organizing to help fellow asylum-seekers in their journey to the United States.  The organizers of the Viacrucis and other solidarity organizations have also started a bond fund to bail out both Central American and Haitian hunger strikers. Caravan participants began a process of critical consciousness-raising among a diverse array of groups whose displacement can be blamed in large part on U.S. foreign policy in Central America and the Caribbean.

Boris, a member of the Adelanto Nine, relayed the following message:

“Before coming in the Viacrucis, I thought of myself as an individual. But through the journey, I learned that any of us could have to migrate one day and that we are living a collective problem. When I get out of here, I will struggle for my detained compañeros, and I urge people to struggle in solidarity with us as well.”

As the guards took him away at the end of the visit, he raised his fist and said: “La unión hace la fuerza.” (“Unity creates strength.”)

Martha Balaguera is a Ph.D. Candidate in Political Science at the University of Massachusetts Amherst, and Visiting Fellow at the Center for U.S.-Mexican Studies, University of California San Diego.

Alfonso Gonzales, Ph.D., is an Associate Professor in the Department of Ethnic Studies at the University of California Riverside and the author of the book Reform Without Justice: Latino Migrant Politics and the Homeland Security State (Oxford 2013).