The Trump administration’s crackdown on unauthorized immigration obscures his larger effort: to prevent lawful forms of immigration for migrants and remake the racial composition of the country. 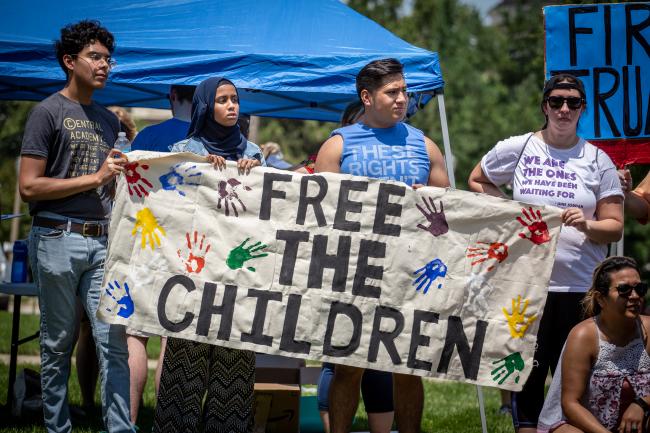 Since the first moments of his 2016 presidential campaign, Donald Trump has openly expressed antagonism toward Latinx communities, in particular undocumented immigrants. Before campaign rallies, his cabinet, and twitter followers, Trump has called Mexicans rapists, Central Americans MS-13 gang members, and referred to migrants and asylum seekers as "not people" but "animals" from "shithole" countries, bent on "infestation." Although the tone and bluster is violent, racially charged, and without factual merit, the rhetoric of migrant criminality is its own spectacle, driving an administrative immigration policy that seeks to diminish lawful nonwhite migration to the United States. It gave us the "zero tolerance" policy toward unlawful entry announced in April with traumatic ramifications this past spring.

Trump's emphasis on crime, just like his unfounded vitriol, is a mask for his larger effort to limit lawful forms of migration. After inheriting a finely tuned enforcement machine—courtesy of the Obama administration—Trump quickly widened its reach, targeting persons previously deemed non-priorities for deportation.

That was the easy part. His more carefully planned, multi-agency project is a short and long term assault on legal migration—blocking potential asylum, closing avenues to adjust status, and threatening to halt post-1965 migratory trends in which nonwhite migrants predominate. These policies break international law prohibiting refoulement, or the return of asylum-seekers to danger in their home countries, interfere with citizenship applications, and narrow authorized channels to migration. By stripping migrants of temporary protections and other paths-to-legal statuses, these actions will wind up increasing the undocumented population.

The administration justifies its actions through claims it is protecting U.S. citizens from crime. Crime pays politically, which is why the administration uses inflated and fabricated numbers as convenient tools. Migrants accused, charged, or convicted of crimes deserve a robust defense, especially when the threat of deportation hangs in the balance. As it stands, immigration courts provide a diminished form of due process—without guarantees to counsel or bond hearings, and different evidentiary standards than the criminal court system. In the case of "zero tolerance," presumptions of criminality function as a smokescreen, at once dimly considered and cruel, but also politically calculated to deter immigration. Avoiding any legislative solutions, this policy serves to slow, prevent, and block asylum claims through bureaucratic, administrative processes.

Seeking asylum is in fact lawful—an important and often left out part of the national conversation on immigration. Anyone who is fleeing a country where they face threats to their lives has the right, according to international law, to seek refuge in another country. It's not easy, but it's theoretically within everyone's rights. As such, even though Trump frames his policy as a "zero tolerance" anti-crime effort against undocumented immigrants, it really serves as part of his larger attack on legal migration.

And this is just the latest.

Let's recall that Trump ended Deferred Action for Child Arrivals (DACA), which the federal courts eventually blocked. He put forth multiple iterations of the Muslim Ban, which the U.S. Supreme Court eventually upheld. He ended Temporary Protected Status for six nations (El Salvador, Haiti, Honduras, Nepal, Nicaragua, and Sudan), impacting nearly 400,000 people, and ended Deferred Enforced Departure, another temporary status, for 800,000 Liberians. The courts have challenged each of these policies for their racial animus.

In particular, the Trump administration is adding further barriers to refugee and asylum systems. He cancelled the Central American Minors program, which allowed youth to seek asylum from their home countries. The Trump administration is changing the calculus for what counts as a "credible fear," especially tailored to Central American asylum claims, by removing gendered violence and gang aggression as bases for seeking asylum. Attorney General Jeff Sessions has intervened in court decisions, is measuring immigration judges' performances by the amount of cases they close—"volume is critical," he says—and has been accused by members of Congress of political bias in hiring judges. In addition, the Trump administration is cutting funding for resettlement agencies, lowering caps on refugees, and even ending "child sensitive questioning" for children's asylum proceedings. One asylum worker called these administrative and bureaucratic strategies "death by a thousand paper cuts."

Other lawful statuses are also under attack. An executive order signed in late June is set to expand Citizenship and Immigration Services (USCIS) policing duties by encouraging its officers to issue more Notices to Appear (NTA)—the charging documents that initiate deportation—when applicants' requests for relief or adjustment of status are rejected. USCIS, it is worth noting, currently originates about one third of all deportation proceedings—almost twice as many as Immigration and Customs Enforcement (ICE), according to data from 2016. USCIS’ increased police powers will mean green card holders, or legal permanent residents, will be targeted in raids, and increasingly referred into deportation proceedings, curbing migrants' efforts to get right with the law.

The Trump administration is also targeting citizenship itself, making naturalized citizenship more difficult to obtain for poorer migrants. The administration began drafting rule changes in early 2018 that would reinterpret the centuries-old "public charge" liability designation that bars naturalization for immigrants who use a range of public benefits that they or their families are eligible for—including food stamps, children's health insurance, tax credits, and other benefits. It has also begun to scrutinize already-closed citizenship cases to in an attempt to denaturalize citizens. Even citizenship—the only irrevocable and permanent immigration status—is under threat. Although last year the Supreme Court ruled that citizenship could not be revoked over minor falsehoods—like failing to disclose a traffic violation—there isn't a statute of limitation on the government's authority to do so. The policy's true scale, then, is the collapse of the "assumption of permanence," as Masha Gessen argues in the New Yorker." All of them—all of us—are second class citizens now."

Many of Trump's longer term goals fall beyond the reach of administrative capability and would require congressional action. So far, most of the administration's policies have emanated from the Oval Office and not the halls of Congress. Still, the president has tweeted test balloons and envisioned sweeping changes to immigration legislation. Trump mongered fear on Twitter over "chain migration"—or family reunification policy, which was established in 1965 as a salve for racist country-of-origin quotas.  He's directed his ire toward the "diversity" lottery—established temporarily in 1986 and permanently in 1990 to "reinvigorate European migration," according to Hiroshi Motomura. Perhaps it was the word "diversity" that irked the President or that the lottery, for decades a vehicle for European migrants, has increasingly become an avenue for African migration.

Whereas the diversity lottery represents only 5% of authorized migration annually (50,000 visas), the proposed change to family reunification policy would be a seismic modification to a half-century of racial diversity in migration. This is nothing less than demographic engineering to “make America white again.”

Through administrative maneuvers, Trump is effecting change in migration policy by twisting existing legislation with administrative declarations and creating major reforms outside of statutory law. USCIS, a service agency, becomes an enforcer as reasonable exemptions to deportation are erased. For migrants, as the enforcement net widens and becomes more callous and unforgiving, fear of unlawful status merges with fears of the process of legalization itself. Migrants fortunate enough to gain hearings before immigration judges will stand in line and wait years with 711,000 other hopefuls.

Thus far, Donald Trump has not passed immigration legislation and is operating within similar budget constraints as his predecessor. His border wall has stalled and hiring of border and immigration officers is down, not up. The lower courts held the line on the Muslim ban, DACA, and the recent "zero tolerance" policy. Migrants, their communities, and advocates have also pushed back. But it’s the quiet, technical, and bureaucratic changes that often evade opposition and carry widespread consequences.

At the height of the child separation crisis in June, Donald Trump tweeted his vision of removing all legal rights from asylum seekers, just four days after ordering an end to family separation. "We cannot allow all of these people to invade our Country. When somebody comes in, we must immediately, with no Judges or Court Cases, bring them back from where they came, "he wrote. This pivot toward ending the asylum process altogether—he's even floated a plan to end processing at ports of entry—is part of the administration's pilot efforts to change the racial profile of the people who enter the United States.

With several tools at his fingertips—blocking migrants from allegedly at-capacity ports of entry, expedited removals for recent arrivals, reinstatements of old removal orders, and other loopholes around the courts—the Trump administration is evading the few legal means available to migrants. For example, 83% of removals in 2016—before the President's full court press on enforcement—happened without appearances before an immigration judge. For Trump, this is not enough.

The vast majority of Trump's policies thus far have targeted lawful means of entry and relief through policing, reinterpretation of bureaucratic categories, and closing avenues of relief—all focused on migrants of color. Family separation and child incarceration require immediate attention for so many reasons, if only for the physical and emotional suffering of Central American asylum seekers. But these destructive policies are mere conceits—zealous inventions of a racist and xenophobic executive and his minions, unprepared and unwilling to be accountable for the trauma they've caused.

The scale of halting lawful channels of entry is punitive and plainly cruel—nothing out of the ordinary for the Trump administration. It also represents an effort to engineer the racial makeup of our country. Such racialized policies are not new, and in fact span four centuries—from racial prerequisites to naturalization and citizenship in the 18th century, Chinese exclusion in the 19th century, racist immigration quotas in the 20th century, through the enforcement era and into the Trump era. When such policies go from executive orders to become legislation—then they will hold consequences for generations to come.