Lava Jato in Bolivia: Boon or Bane for Evo Morales?

Will an inquiry into Bolivia’s potential ties to the massive Lava Jato bribery scandal help Evo Morales, or derail his bid for a fourth presidential term? 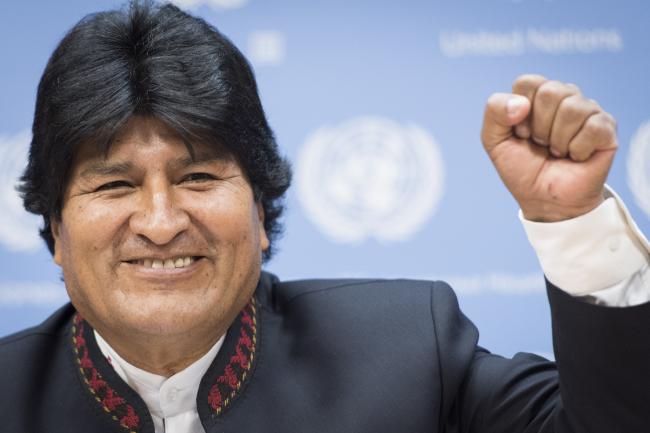 Next month, Bolivian lawmakers will issue a much-anticipated report on the country’s ties to the massive Lava Jato (Operation Carwash) bribery scandal.

When President Evo Morales launched the official corruption inquiry last April, the region was taken somewhat by surprise. Up until then, Bolivia had seemed immune to the ever-widening scandal that has reached the highest levels of power in countries from the Andes to the Caribbean, stalling billions worth of infrastructure projects, toppling current and former presidents, and altering the region’s economic and political landscape.

In Brazil and elsewhere, Lava Jato has largely helped ascendant right-wing politicians exploit popular anti-corruption sentiment to undermine leftist and centrist government leaders. In a bold move, Morales—the sole remaining member of the original group of Pink Tide presidents who dominated Latin American politics earlier this century—is hoping to use Bolivia’s anti-corruption probe to bolster his contentious 2019 reelection campaign, by discrediting potential rivals while avoiding possible exposure to ruling MAS (Movement Towards Socialism) party officials.  Morales is bidding for a fourth presidential term, notwithstanding the results of a popular referendum that rejected the constitutional amendment allowing him to do so.

Even so, a key lesson of Lava Jato is that massive corruption cases have a way of taking on a life of their own, with unpredictable and unmanageable consequences. As Bolivians await the Commission’s report, it’s an open question as to whether Morales’s new anti-corruption efforts will ultimately strengthen his hand, or prove to be his undoing.

Lava Jato originated in Brazil in 2013, when local police uncovered a vast money-laundering network that operated from automatic carwash stations, shielding kickbacks to politicians and businessmen from large construction firms under contract with the state oil company, Petrobras.

As the scandal rippled across the region, Odebrecht, the largest construction company in Latin America, confessed to paying nearly $800 million in bribes to government officials in a dozen countries, in exchange for receiving more than 100 public works contracts and an estimated $3.3 billion in ill-gotten gains.

After a criminal investigation spearheaded by the US Department of Justice, Brazil, and Switzerland, the company agreed to a $4.5 billion settlement, with its CEO sentenced to 19 years in prison. But the company ended up paying only $2.6 billion, while Marcelo Odebrecht is now serving the balance of his reduced 9-year term under house arrest in his luxury Sao Paolo villa.

Meanwhile, plea-bargaining testimony offered by Odebrecht executives (and officials of other firms caught up in the bribery scandal) provided the backdrop for impeachment of one leftist Brazilian president (Dilma Rousseff) while sending another (Lula) to jail.

In Peru, leftist ex-president Ollanta Humula was arrested, ex-president Toledo fled to the US, and center-right President Pedro Pablo Kuczynski resigned, rather than face impeachment by his more reactionary political enemies. In El Salvador, ex-FMLN president Mauricio Funes, accused of money-laundering by Lava Jato investigators, became another fugitive from justice.

In Argentina, which has been slow to pursue its Lava Jato corruption cases, the recently-uncovered Cuadernos bribery scandal (named for the notebooks of a former government driver who recorded the alleged payoffs) has resulted in the detention of a dozen businessmen and former high-ranking officials in the administrations of Nestor and Cristina Fernández de Kirchner. Just as Lava Jato sent Lula to jail as he was leading polls to return to Brazil’s presidency, the new scandal hits Fernandez, now a Senator, ahead of Argentina’s October 2019 presidential election, where she has been expected to present a formidable comeback challenge to conservative president Mauricio Macri.

Despite the underlying partisan tilt of Lava Jato and related corruption probes, the scandals have grown to ensnare many of the parties and politicians who set the original accusations in motion. In Brazil, the president of the Chamber of Deputies who spearheaded Dilma’s impeachment was himself sentenced to 15 years in prison for accepting bribes. While current conservative president Temer has thus far successfully dodged corruption prosecution, one-third of his cabinet and Senate, several governors, and 3 ex-presidents—virtually Brazil’s entire political class--are under investigation.

In Argentina, several of the firms implicated in the Cuadernos scandal have business, family, and political ties to Macri.  (He recently announced that no construction contracts will be rescinded, nor will the accused firms be barred from future bidding, until the cases are finally adjudicated—a process which will likely take many years.)

Not surprisingly, several countries whose incumbent governments are heavily implicated in Lava Jato have taken little action to pursue potential charges. These include Venezuela—second only to Brazil in the value of bribes allegedly received (by Maduro and other high-ranking officials)--and Mexico, where the outgoing PRI regime has successfully stalled two separate federal investigations.

Bolivia is one of the few Latin American countries that did not appear in the US Department of Justice‘s 2016 investigative report on Lava Jato.  When 11 Latin American nations signed a Declaration in February 2017 to jointly pursue the report’s allegations, Bolivia was not among them. With no recent dealings by Odebrecht in Bolivia, Morales took the position that no domestic investigation was necessary.

But in April 2018, further revelations from Brazil’s Lava Jato investigation linked the scandal for the first time to Bolivia. According to a Brazilian police report, 3 Bolivian officials—identified only by their initials—were paid at least $550,000 in bribes by Carmago Correa, another Brazilian company that received a contract to build the Roboré-El Carmen highway in Santa Cruz.

Pledging that “my government will never fall for corruption; we are not in that kind of business,” Morales launched a special Mixed Commission, consisting of 4 MAS and 2 opposition deputies, to investigate the claims. The Commission was narrowly charged with pursuing evidence presented by the Brazilian police regarding the 3 road contracts awarded to Camargo Correa and Odebrecht during 2004 and 2005. Morales took office in January 2006.

Opposition legislators, who refused to participate in the official MAS-dominated Commission, were quick to criticize its limited jurisdiction.  They questioned why several other major Brazilian companies involved in the Lava Jato corruption scandal, that have played a significantly greater, more recent, and more controversial role in Bolivia’s infrastructure development, are not being investigated.

In particular, critics have focused on OAS, the principal highway contractor during the early years of Morales’s government, with more than $800 million worth of contracts. OAS’s projects were financed largely by BNDES, Brazil’s development bank, in a special arrangement negotiated between Lula and Morales. Perhaps ironically, OAS is the company that allegedly provided kickbacks to Lula, in the form of a renovated triplex seaside property, for which he is now serving a 12-year jail sentence.

In 2008, OAS was awarded a $415M contract to build the controversial TIPNIS highway through the Isiboro-Securé Indigenous Territory and National Park in the Bolivian Amazon.  After unrelenting protests by indigenous and environmental groups paralyzed the road’s construction, the contract was revoked in 2012 for lack of performance. OAS also received a $226M no-bid contract for Potosi-Tarija highway in 2009, after another Brazilian contractor failed to complete it, as well as $100 million award for the Potosi-Uyuni highway.

Back in 2011, José Maria Bakovic, the former director of Bolivia’s National Road Service, charged that Morales promised “all the highways in Bolivia” to OAS, in exchange for financing his 2005 electoral campaign. The TIPNIS road contract, he alleged, was overpriced by at least $200 million. What’s more, according to then-opposition leader Juan del Granado, the Morales government illegally advanced $7.5M million to OAS before the TIPNIS contract was executed.

These claims, never officially pursued, have been revived by a parallel unofficial commission established by opposition politicians to counter the official corruption probe. Meanwhile, the Mixed Commission, along with pro-government media outlets, has focused attention on the activities of ex-presidents Carlos Mesa (2003-5) and Eduardo Rodriguez Veltzé (2005), in conjunction with the earlier Camargo Correa and Odebrecht contract awards.

Despite their current supportive—and highly visible—roles representing the Morales government in Bolivia’s maritime dispute with Chile before the International Court of Justice at The Hague, both men have had fraught relationships with Morales over the years, which have recently become more contentious. Mesa, in particular, has emerged as a leading critic of Morales’s decision to run for reelection. While he consistently denies any interest in becoming a candidate himself, polls show that he is the only potential rival who could viably challenge Morales.

Mesa has vigorously denied any involvement in the alleged bribery scheme, including the suggestion that he is the “CM” referenced in the Brazilian police report. He insists that he is being persecuted by Morales as a political adversary. (The Morales government is also currently seeking to prosecute Mesa for causing economic damage to the Bolivian state, in conjunction with a compensation settlement recently won by the Chilean mining company Quirobax, whose concession was cancelled during Mesa’s presidency.)

Just as the Mixed Commission was preparing to wrap up its investigation, news broke that at least 3 companies involved in Argentina’s Cuadernos scandal also had multimillion dollar contracts of a questionable nature with the MAS government. Ar.bol, a subsidiary of Argentina’s Electroingeniería, was the sole bidder for a $257 million highway project awarded in January 2010 and rescinded in August 2015, for non-compliance. Spain’s Isolux-Corsan Corviam was awarded 2 major infrastructure contracts, which it subsequently abandoned. The Italo-Argentine conglomerate Techint provided engineering and exploratory services to 4 hydrocarbons transnationals operating in Bolivia between 2010 and 2016, in joint ventures with the Morales government.

High-ranking officials from Electroingeniería, Isolux, and Techint are currently under arrest in Argentina—including the former president of Isolux’s Argentinean branch, who reportedly advised that a payment of $1 million would be “prudent to leave in Bolivia.” The Mixed Commission has announced that it will not expand its jurisdiction, or extend its deadline, to address these new revelations.

As anti-corruption sentiment in Bolivia intensifies, the impact of Lava Jato, Cuadernos, and related bribery schemes on the upcoming election and Morales’s political future remains to be seen. Both MAS supporters and detractors are ever-mindful of the well-timed CAMC scandal—involving Morales’s alleged love-child and a former lover suspected of steering multi-million dollar no-bid contracts to a Chinese engineering firm—that derailed Morales’s  referendum bid in February 2016. The allegations proved to be largely unsupported.

While few expect the Mixed Commission’s report to be other than a whitewash for Morales, the opposition’s findings will likely keep the controversy front and center and ripe for future bombshells, real or fabricated, in the months to come.