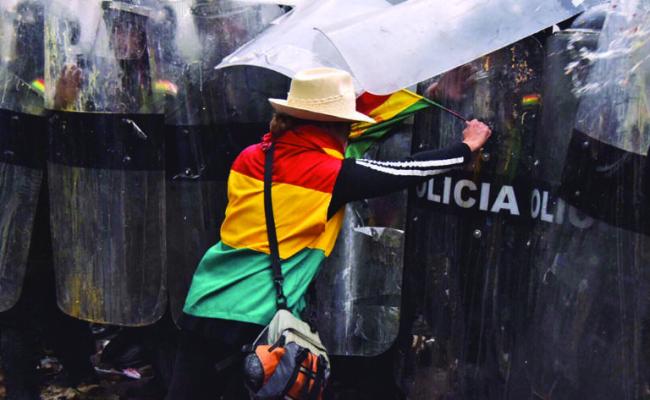 To the surprise of virtually no one, on December 4 Bolivia’s Supreme Electoral Tribunal (TSE) agreed to place President Evo Morales on the ballot for the 2019 election—despite the Constitution’s term limits and the results of a popular referendum held on February 21, 2016, that rejected his bid for a fourth consecutive term.

The ruling validated a 2017 decision by the Plurinational Constitutional Court (TCP), that term limits amounted to a violation of Morales’s right to run, and of voters’ rights to elect him, based on an inter-American treaty to which Bolivia subscribes.

Still, 2 out of 6 TSE members voted against Morales’s candidacy, following the earlier resignation of the TSE chairwoman who was another potential dissenter. The apparent rupture within the TSE, which functions as a “fourth arm” of Bolivia’s government, mirrors the increasing polarization of Bolivian society over Morales’s decision to run again.

For and Against Morales

The TSE ruling was greeted with protest marches, road blockades, vigils, and work stoppages causing varying degrees of disruption in eight of Bolivia’s nine departments. A student mobilization in Santa Cruz, Bolivia’s wealthiest department and the heart of anti-Morales sentiment, ended in violence with the regional electoral tribunal burned to the ground. Hunger strikes were launched in six major cities.

The protesters, the self-described “Defenders of 21F” (named for the date of the citizen referendum), represent a loose coalition of “citizen platforms” made up of disillusioned former Morales supporters and disaffected middle class voters, tenuously allied with traditional elite and conservative sectors who have opposed Morales, and the ideology of his MAS (Moving Towards Socialism) party, from the start.

Among popular sectors, discontent has been fueled by Morales’s seeming abandonment of Indigenous and environmental causes once central to MAS’s agenda, in favor of extractivism and megaprojects. While generally supportive of the MAS political project, these groups are alienated by the government’s increasing drift towards authoritarianism, nepotism, and corruption. For some Indigenous MAS defectors, Morales’s insistence on defying the constitution and referendum is deeply offensive, violating their traditions of leadership rotation and “governance by obeying” (mandar obedeciendo), which Morales once promised to honor.

These constituencies have little in common with the elite and rightwing sectors participating in 21F, who are seeking to capitalize on the groundswell of anti-Morales sentiment to return Bolivia to the neoliberal fold (or worse). Their toxic rhetoric and inflammatory charges of “dictatorship” taint the 21F movement with echoes of Bolivia’s colonial and racist heritage. The 21F Defenders are united only in opposition to Morales’s reelection, with no common alternative project.

Standing firmly against this disparate resistance are the hard-core MAS supporters, including coca-growers, cooperative miners, indigenous commercial traders, and other sectors that have benefitted most from Morales’s redistributive policies. For these groups, the reelection of Morales, the longest-standing president in Bolivian history, is essential to guarantee Bolivia’s continued economic growth (at a rate which currently leads the region), political stability, and the completion of the Agenda Patriotica, the government’s ambitious national development plan for 2025.

For many in this majority-Indigenous country, Morales remains a powerful symbol. His supporters argue that the narrow defeat of 21F, by a margin of only 136,000 votes, was largely due to “fake news,” implicating Morales in an alleged influence-peddling scheme involving his former lover and a Chinese engineering firm with multiple government contracts. With respect to Morales, the charges were never substantiated.

Still others believe that Morales should stay in power to counter ascendant conservative leaders in Brazil, Argentina, and Chile—not to mention the United States—especially with the recent revelation of ties between Jair Bolsonaro and the citizen platform “Les Calles Bolivia” (the Bolivian Streets), which is active in the 21F Defenders movement.

On the electoral front, despite the perceived need for unity in confronting Morales, the opposition has been unwilling or unable to consolidate behind a single candidate. No fewer than 7 TSE-approved opposition parties or coalition slates are fielding candidates for the 2019 ballot, all vying for the same 21F vote. The differences among the parties are tenuous, with each focused on critiquing the MAS government from a more or less neoliberal perspective, but lacking a coherent alternative program.

In terms of registered voters, the largest opposition slate is Bolivia Says No, allied with the Demócratas party, whose relatively unknown candidate (Senator Oscar Ortiz) is a protégé of Santa Cruz Governor and long-time Morales rival Reubén Costas. A last-minute rupture between Costas and cement magnate Samuel Doria Medina, another perennial Morales rival, led to the withdrawal of Doria Medina’s National Unity (UN) party from this coalition, leaving the UN without representation in the presidential race. Other candidates include: ex-president Jaime Paz Zamora; ex-Vice President Victor Hugo Cárdenas, now allied with the evangelicals; and ex-MAS Education Minister Félix Patzi, the current Aymará governor of La Paz, who hopes to corner the indigenous vote.

The most credible threat to Morales is presented by Carlos Mesa, a journalist and historian who served as vice-president to Gonzalo Sánchez de Lozada (“Goni”) before Goni’s infamous ouster by a popular insurrection, and then briefly (2003-5) as Bolivia’s president. More recently, he has maintained a high profile as an international spokesperson for Bolivia in its maritime dispute with Chile, and as a respected political analyst who has become increasingly critical of Morales.

Ever the reluctant politician, Mesa entered the presidential race at the last minute in October, under the banner of the Left Revolutionary Front, a defunct Maoist party that had retained its electoral registration. He has promoted himself as a principled political outsider, a “new leader for a new time” without party or ideological allegiance—an image that is somewhat belied by his brief legacy as a president who resigned rather than accede to popular demands for the nationalization of gas. Still, he also refused to repress the protesters.

According to political analyst Fernando Molina, the decision to present his candidacy without the backing of any major opposition party was fundamental to Mesa’s “lone wolf” strategy. The sole opposition leader to formally ally with Mesa was La Paz Mayor Luis Revilla, whose Sol.bo party lacked standing to field its own presidential candidate.  (More recently, Samuel Doria Medina has appeared to throw his weight behind Mesa as the most formidable opponent to Morales.) 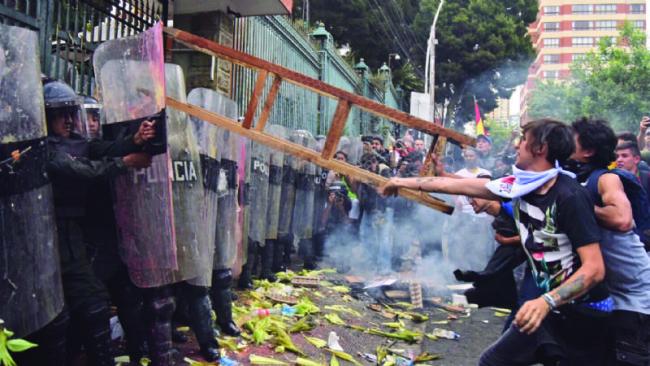 Another major factor contributing to the fragmentation of the opposition is a recently enacted MAS law that requires political parties, for the first time, to hold primaries to elect their presidential candidates. Adopted by the MAS-controlled Congress in September, the law allowed just a few months for parties and slates to register their candidates before the scheduled January 27, 2019 primary. According to Molina, this was a strategic effort to hinder unification of the disorganized opposition, and especially to undermine Mesa, then a potential candidate without a party.

The primaries law has continued to be a flashpoint in the electoral controversy, especially since none of the parties are presenting competitive slates for the presidential contest. Widespread irregularities have appeared in the party registries, with close to 35,000 voters complaining that they had been listed without their knowledge or consent, or for the wrong party.

Only 25% of all Bolivians who are registered to vote in the general election, where voting is mandatory, have been listed for the primary, where voting is optional. Outraged voters, backed by four opposition candidates (including Mesa) and the two dissenting members of the TSE, are now demanding that the government suspend the primaries, rather than waste $4 million to implement them for no apparent reason.

Despite the splintering of the opposition, Morales’s reelection is far from guaranteed. According to the 2009 Constitution, a presidential candidate needs 50% of the vote, or 40% plus 10% more than the next-highest candidate, to win the election outright. Otherwise, the vote goes to a second-ballot runoff between the top two candidates.

The second ballot process has not yet been tested, since Morales won handily in the last two elections (and under the previous Constitution, the runoff contest was arbitrarily decided by the Legislature). But in the current political environment, with the traditional MAS voto duro pegged around 30%, there is a growing possibility that Morales could fail to win on the first ballot, and be defeated by Mesa on the second, when the opposition is more likely to coalesce.

Recent polls by the centrist, anti-Morales daily Página Siete support this scenario (although their sampling methodology tends to under-represent the heavily pro-Morales rural vote). MAS polls show Morales with close to a 10-point lead over Mesa, but still not enough votes to win on the first ballot. For the first time, Morales recently acknowledged that he could lose the election to the “digital war.”

Not surprisingly, as the confrontation between Morales and Mesa heats up, the government is ramping up its arsenal of legal attack weapons.  Earlier this year, Mesa was accused of causing economic damage to the state, after an international dispute tribunal forced Bolivia to pay substantial compensation to the only firm that Mesa ever nationalized (the Chilean mining company Quiborax). Later, Morales amnestied Mesa (along with ex-president Jorge “Tuto” Quiroga), ostensibly to avoid hindering their full participation in Bolivia’s maritime defense during the final stages of the case. The move was widely viewed as an effort to derail Mesa’s anticipated, but unannounced, candidacy.

Soon after Mesa’s entry in the race, the MAS-controlled Congress charged him with accepting up to $4.3 million in bribes from the Brazilian construction company Camargo Correa, in exchange for a major highway contract award.  Although the contract became operational under a subsequent administration, and was completed during Morales’s tenure, Mesa is charged with issuing the decrees that made the deal feasible. He has vigorously denied the accusations.

For good measure, the MAS party is also seeking criminal charges against the two TSE members who dissented from the ruling that upheld Morales’s reelection bid.

With the outcome of Bolivia’s upcoming electoral contest looking increasingly uncertain, pro-MAS analyst Katu Arkonada predicts that 2019 will be a year of intense political conflict and confrontation between the forces of “Masismo and Mesismo.” The TSE protests, he argues, are the first battle in a year-long strategy by opposition forces to promote a political-institutional crisis, destabilizing the government and thwarting its efforts to carry out the Agenda Patriotica.

At the same time, says Arkonada, Morales must recognize that to win on the first ballot, the MAS party will need to recover some of its original mystique and grassroots connections. In particular, it must find a way to extend its appeal to the new popular middle class, especially to younger urban voters who have never experienced life under neoliberalism and who take government benefits for granted.

Fifty percent of the 2019 electorate, Arkonada notes, consists of voters age 18-36. These alienated constituents, whose newly-acquired economic and social status under Morales is threatened by the end of the commodities boom, view themselves first as “citizens and consumers, not pueblo or militants in defense of national sovereignty.”

Meanwhile, progressive 21F Defenders continue to struggle with the contradictions of their strategic but dubious alliance with neoliberal and rightwing elements. The unfortunate irony is that Morales’s determination to override the referendum has strengthened these conservative sectors, by allowing them to masquerade as champions of democracy.  How to channel the energies of the 21F movement that emanate from popular forces, to revitalize or reconstruct the independent social movements that have played such a critical role in Bolivia’s political history—inside and outside the electoral process—is a major challenge for the future.