The Opportunistic Border Logic of the Pandemic

As the Trump administration uses the pandemic to enact its border obsession, we must instead reframe our thinking around interdependence. 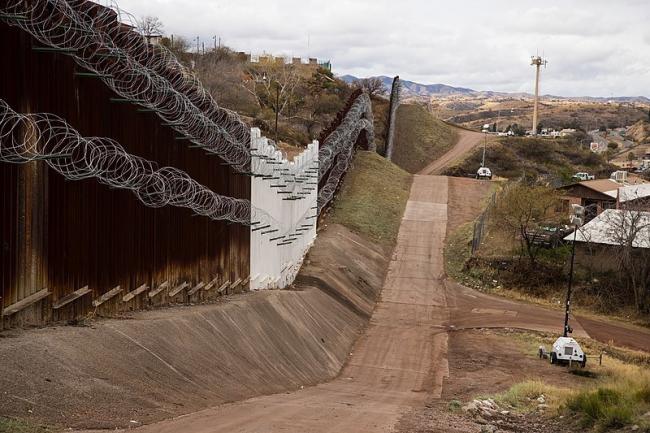 On March 14, 2020, like many college and university faculty around the country, I ended my in-person teaching semester. I did so by traveling with my students to Ajo, Arizona, a former copper-mining town that today has become a hub of Homeland Security activity in the United States-Mexico borderlands. Accompanied by Dr. Scott Warren—who, in November 2019, was acquitted on federal charges for providing humanitarian aid to undocumented border crossers in the Arizona desert—we then travelled 38 miles south to the international boundary. We went there to witness the rapid-fire construction of a new border wall across Organ Pipe Cactus National Monument and the Cabeza Prieta National Wildlife Refuge.

This new section of wall is an outgrowth of the Trump administration’s declaration of a “national emergency” along the United States-Mexico border in February 2019. Since then, the administration has redirected some $6.7 billion from the budgets of the Pentagon and Treasury Department in order to build walls along the international divide. Under the guise of protecting public health, the White House has used the Covid-19 pandemic to intensify its construction spree and to further limit immigration to the United States. Such moves are not only nakedly opportunistic, but also undermine the most basic thing that is needed to successfully defeat the global pandemic: social solidarity.

Trump’s border-hardening response to the coronavirus is a manifestation of what feminist scholars Rajani Bhatia, Jade S. Sasser, Diana Ojeda, Anne Hendrixson, Sarojini Nadimpally, and Ellen E. Foley call “geopopulationism.” This concept describes an approach to governance that would address complex social, environmental, or health problems—a global pandemic is all three—by controlling peoples’ movements across borders. According to this team of authors, its animating logics draw on now largely discredited ideas about population control and redeploys them through measures aimed at “management, surveillance, governance and control to include or exclude particular people from particular spaces.”

As Bhatia et al., describe, these kinds of measures are manifest in everything from colonial efforts to manage labor mobility, to contemporary approaches to biodiversity conservation that depend upon the removal or policing of rural inhabitants imagined as a threat to “pristine” nature. Sarah Launius, Jill Williams, Todd Miller, and I recently used the geopopulationism concept to examine the pivot by the United States and other countries away from strategies of climate mitigation or adaptation toward militarism, migration controls, and other forms of security practice.

The Trump administration is exemplary in its embrace of a geopopulationist worldview, with Trump himself demonstrating a manifest obsession with the border and with border security from the moment he announced his candidacy (and well before). Nowhere is this worldview more clearly on display than in the administration’s nationalistic approach to the Covid-19 pandemic, its repeated assertions that the virus could be effectively managed by controlling peoples’ movements across borders—eclipsing other far more urgent priorities for Americans’ health and wellbeing—and its ongoing efforts to seize on the public health crisis to advance a rabid and long-held anti-immigrant agenda.

On January 31, for example, President Trump took his first significant action on the Covid-19 crisis—not by issuing orders to ramp up production of PPE, functioning test kits, and ventilators, but rather to cut off all routine travel from China, save for U.S. citizens. The president and the administration appear for a time to have believed that the partial closure of travel from China had all but ended any real threat to the United States. On February 2, the president was asked by Fox News’ Sean Hannity, “I think we're now up to our eighth case in the United States. How concerned are you?” He responded, “Well, we've pretty much shut it down coming in from China.” On February 25 Kayleigh McEnany, the national spokesperson for Trump’s re-election campaign, argued that because of the China travel ban, “We will not see diseases like the coronavirus come here.”

Once again, on March 11, at a point when the spread of the virus in the United States had become an undeniable fact, and on the day that the World Health Organization declared Covid-19 a global pandemic, Donald Trump used a prime time address to the nation not to announce a strategy to address the shortfall of critically-needed supplies or to push for critical economic relief measures for workers across the United States. Instead, Trump announced an additional ban on routine travel from Europe, arguing that such a move was necessary “to keep new cases from entering our shores.” Within 15 days of this announcement the number of infections in the United States would begin to eclipse those of any European nation.

Since then, the Trump administration has used the public health crisis to implement anti-immigrant initiatives that the president had long pursued. Like many countries around the world, the United States has closed its borders to routine travel. Yet the administration has gone further, initiating a policy to expelling asylum-seekers by fiat and without access to due process, violating the United States’ 1980 Refugee Act and the government’s obligations under international law.

What’s more, as The Nation reported on March 26, the Trump administration has also attempted to use the Covid-19 crisis to deploy active-duty military personnel to provide logistical and surveillance support to the U.S. Border Patrol along the country’s land borders with both Mexico and Canada. Argued Attorney General William Barr during an April 8 interview with Fox News’ Laura Ingraham, “As horrible as this is and as tragic as it is, there are a couple of good things that can flow from this experience.” He continued, “As much as people talk about global warming…the real threat to human beings is microbes and being able to control disease, and that starts with controlling your border.”

To put a fine point on it, on April 22, Trump issued an executive order suspending the processing of all green card applications filed from abroad for a period of 60 days—a move that, due to particular exemptions specified in the order, will disproportionately impact aspiring immigrants from countries other than Western Europe, Canada, Australia, and New Zealand.

Against the administration’s obsession with the border and its naked xenophobic hostility toward foreign citizens and international cooperation, what we are learning through the present moment—in the United States and throughout the world—is that problems like coronavirus, which threaten all of us, can only be successfully tackled through meaningful cooperation that involves everybody. This is as true on the world stage as it is on a granular level in our own communities and everyday lives through practices like washing our hands, wearing facemasks in public, and through the most mundane practice of all—simply staying home.

It is not transnational mobility that really matters here, but rather our limiting of routine circulation and gathering with one another. Yet the hardship so many of us are feeling as we do so is an acute reminder of the degree to which our lives are inherently interconnected—we rely on each other and find joy and meaning precisely through the relationships we are able to cultivate. It is these very connections—our inherent sociality, our radical interdependence—that the virus relies on for transmission. In the era of Covid-19, our lives and the lives of our loved ones literally depend on the actions that each of us does or does not take to protect one another.

It is our denial of this fact that amplifies the vulnerability to which we are all exposed. This is true at the level of political economy, where for far too long sentiments like former British prime minister Margaret Thatcher’s famous dictum that “there is no such thing as society” have appeared to justify the gutting of social services, public infrastructures, and the most basic of safety nets, which would allow millions of us to weather this economic, financial, and public health storm. As Kim Stanley Robinson recently wrote in the New Yorker, such statements “underpin much of the bullshit of the past forty years”. But it is true also of border policing.

In Tucson, Arizona, where I live, U.S. Border Patrol agents have been photographed staking out official drive-through testing clinics, preventing community members and public health officials from obtaining critical information that could help control the spread of the virus. In border communities like Ajo and Douglas in Arizona and Columbus, New Mexico, residents have raised persistent alarm about ongoing wall construction; they worry that the hundreds of construction workers who continue to travel back-and-forth risk triggering new clusters of disease in these remote communities far from hospitals or other health infrastructure. Meanwhile, recent reports from Guatemala’s Health Minister Hugo Monroy indicate that at least half of those deported by the United States to that country during the month of April have tested positive for Covid-19.

The administration’s continued pursuit of detention and deportation—all while closing the border to asylum seekers—is helping spread the virus from the United States globally. Undoubtedly, this will result in untold numbers of otherwise preventable deaths. It will also help the virus incubate in regions of the world that are even less prepared to provide robust health care and monitoring of the disease, potentially driving waves of transmission and community spread that could return to the United States.

If nothing else, the Covid-19 pandemic and the fall-out from the pandemic both require that we break with the geopopulationist impulses that would reduce our world, our lives, and our communities to competitive isolation. For what the virus has radically laid bare, and what many of us are only beginning to come to terms with, is that our vulnerability to one another cannot be meaningfully held at bay or controlled by building border or prison walls; by locking away or deporting our neighbors, co-workers, members of our community, and foreigners alike. Instead, the solutions to the problems we face must be addressed through the quality of the relationships we weave between one another.

Recognition of this fact is driving hundreds of creative, grassroots responses to the pandemic, addressing urgent needs from providing solidarity and support to the elderly and to folks with disabilities, to community food distribution, to the popular manufacturing of PPE. It is this spirit that will allow us to mitigate the harm from the long-term economic fallout that has been triggered by the virus, with millions thrown out of work and who risk losing their homes and access to healthcare, joining the millions more who entered this crisis already homeless and/or without health coverage.

With a pandemic crisis that threatens to last for many months, an economic crisis that will surely persist even longer, and a climate crisis that bears down well into the future, we literally cannot afford to deny any longer our fundamental interdependence with one another. Because the dangers we inhabit do not fundamentally emerge from somewhere, or somebody, else. The dangers—and the solutions to these dangers—have always been with us.

Geoff Boyce lives in Tucson AZ, where is Academic Director of the Earlham College Border Studies Program. His research tackles the transnational dimensions of border and immigration policing in North America and its uneven dissemination of vulnerability across scale. For more information, see www.earlham.edu/border-studies