The Ollanta Humala Victory in Peru: Moving Beyond Neoliberalism?

By Deborah Poole and Gerardo Renique On June 5, Peruvian voters handed a hard won presidential victory to the progressive nationalist, Ollanta Humala. While it is too early to predict the future of the Humala government, his victory has dealt an important blow to both the Peruvian right and U.S. interests in Latin America.
Tweet
MichaelFox 6/24/2011

By Deborah Poole and Gerardo Renique 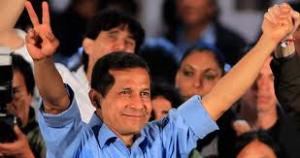 Humala on Election Day (pavesasdelmundo.blogspot.com)On June 5, Peruvian voters handed a hard won presidential victory to the progressive nationalist, Ollanta Humala. The elections brought to an end a polarizing campaign in which the Peruvian right had mobilized considerable resources to demonize Humala for his past connections to Venezuelan president Hugo Chávez, his alleged participation in a 2005 military uprising led by his brother Antauro, and his possible involvement in human rights abuses while serving in the Peruvian military. Peruvian media and social networks widely publicized these concerns about Humala’s past, along with other unfounded rumors that he would expropriate second homes and convert all industries and mining ventures into state owned enterprises. As the frenzied media campaign gained strength, Peru’s leading daily El Comercio and its affiliate TV stations fired several prominent journalists for “humanizing” Humala.

What most worried the right, however, were Humala’s moderate nationalist proposals to end corruption, strengthen Peruvian sovereignty over natural resources through windfall taxes on foreign mining companies, and expand Peru’s broken social welfare system through educational reforms and public pensions for the elderly. Although the proposed reforms pose little threat to Peru’s entrenched neoliberal economy, Humala’s nationalism and military background uncomfortably reminded Peru’s economic elites of former military president General Velasco Alvarado and his 1970s agrarian reform and nationalization program. These elites viewed even the most modest proposals for reform as an unacceptable threat to the economic “boom” that has brought unprecedented growth rates rivaling those of China. A small percentage of upper class Peruvians have profited from the unregulated foreign investment that has fueled Peru’s economic growth.

The 55% of the vote that went to presidential candidates Humala and Keiko Fujimori in the first round, however, made it clear that more than half of voters had not benefitted from the economic “miracle,” and were looking for change. During the campaign, Humala proposed reforms to redistribute wealth within the current economic model. Fujimori offered a panoply of populist poverty alleviation measures intended to soften the effects of neoliberal exclusion. According to Peruvian government statistics overall poverty rates have declined in recent years, however macroeconomic “growth” has brought few tangible benefits to the 31% of Peruvians who continue to live below the poverty line. This is especially true for the 60% of the rural population that lives in poverty. Growth has instead exacerbated the striking regional, ethnic, and class inequalities that characterize Peruvian society. Wealth and power have increasingly become concentrated in the Peruvian capital, Lima, which serves as tax home to the many international mining companies that have systematically devastated local communities, economies, and environments in Peru’s impoverished highland and jungle regions.

Mining and petroleum concessions now cover almost 70% of Peru’s national territory posing a serious threat to peasant and indigenous communities and their political and cultural survival. The current conservative government of Alan García has met indigenous, peasant, and regional protests against unregulated mining and environmental destruction with military and police violence. Regional strikes over mining, hydrocarbon concessions, and hydroelectric projects in Arequipa, Ancash, Cajamarca, and Moquegua coincided with the run up to the first round election on April 10. As the second round campaign drew to a close, the southern region of Puno staged a dramatic three-week general strike that paralyzed commerce and tourism, and closed the Peruvian-Bolivian border. Peru’s 25 elected regional governments, whose constitutional mandate it is to diminish regional inequities, have been consistently hamstrung by a central government that retains absolute jurisdiction over natural resources, mining, and hydrocarbon concessions, and the distribution of fiscal resources.

These structural inequities help to explain the strong support that Humala received in Peru’s southern, highland, and Amazonian regions, and Fujimori’s popularity among the urban poor in Lima. Humala’s nationalist program offered hope for a more equitable distribution of the benefits of Peru’s booming economy. Fujimori’s populist proposals and campaign handouts catered to popular nostalgia for her father’s poverty alleviation programs and his reputation for having imposed law and order on a country devastated by internal war. Keiko Fujimori’s father, Alberto Fujimori is now serving a maximum 25-year sentence for his role in kidnappings, killings, embezzlement, and bribery during his 10-year-long presidency (1990-2000). Putting self-interest above human rights and democratic principles, Peru’s elites nevertheless moved quickly to consolidate their support for Keiko Fujimori, ignoring her clear ties to the authoritarian policies, human rights violations, and rampant corruption of her father’s presidency.

The elections also underscored the extent to which racial and class fears continue to animate Peruvian politics. For Peruvian elites, both candidates offered an unpleasant reminder that the majority of Peruvian voters were not like them. Fujimori’s appeal to the (mostly urban) poor, however, offered elites a reassurance that the dark-skinned masses could be contained through modest, state-led programs in which the lower class would figure as passive clients of state beneficence. Humala’s supporters, on the other hand, represented a more politicized working, peasant, and indigenous population demanding fundamental reforms to the reigning economic model. Faced with such an option, the elites closed ranks, turning against even their own Nobel Laureate, Mario Vargas Llosa. After Vargas Llosa publicly condemned the fascist and authoritarian tendencies of Fujimori, and announced that he would instead vote for Humala, he and his family were verbally attacked both publically and in the press. Vargas Llosa’s bold support for Humala was crucial in rallying the vote of undecided middle and upper class voters. Fujimori’s authoritarian tendencies and history of corruption mattered little to economic and political elites whose attitudes towards popular classes still bear the colonial imprints of the old nineteenth century oligarchy.

While it is too early to predict the future of the Humala government, his victory has dealt an important blow to both the Peruvian right and U.S. interests in Latin America. Humala’s election will certainly undermine the recently formed Pacific Alliance between Mexico, Colombia, Chile, and Peru. Sponsored by the United States, the Alliance is meant to counter the Union of South American Nations (UNASUR) and to recuperate terrain recently lost by American investors to Chinese, European and South American capital. Humala’s election was also a resounding defeat for Peruvian President Alan García. García not only violated Peruvian law by openly endorsing Fujimori’s candidacy, he also made state resources available for the media campaign against Humala. García’s American Popular Revolutionary Alliance (APRA) party—the oldest political party in Peru and a stalwart of social democracy in Latin America—barely obtained four congressional seats in the April elections.

Perhaps the most significant losers in the June elections, however, are the Fujimorista technocrats who formed the core of former president Alberto Fujimori’s authoritarian populist project. Humala’s victory over Fujimori probably spells an effective end to Fujimorismo as an organized political movement. Although the Fujimorista electoral coalition, Fuerza 2011, won the second highest number of seats in the national legislature, it remains to be seen what alliances they can forge with Peru’s beleaguered political right.

Many have interpreted Humala’s election as a victory for the Latin American Left. Insofar as he won despite the untrammeled opposition of the powerful Peruvian right, and with the support of Peru’s regional, indigenous, student, and social movements, this is true. Moreover, Humala won as part of an electoral coalition (Gana Peru) that included seasoned politicians and intellectuals from the Peruvian Left. It remains to be seen, however, to what extent (or perhaps how quickly) Humala will distance himself from those members of the coalition who continue to press for substantive changes to the political and economic system, and how well he will be able to control the fractious regional, indigenous, peasant, and anti-mining movements that helped to bring him to power. Nor will Humala enjoy the advantage of an organized and coherent party or ideological support. Although the Nationalist Party was instrumental in rallying support for Humala in some regions of the country, the more significant support came from a broad array of social movements including anti-Fujimorista and anti-corruption movements, and the indigenous, anti-mining, peasant, and regional movements that form the strongest opposition to Peru’s neoliberal economic status quo. These forces were especially important during the final weeks of the campaign, as the “No to Keiko Fujimori” movement organized massive demonstrations in Lima and other cities. Their role in helping to elect Humala suggests a possible shift within the country, as political actors in the interior gain new prominence vis a vis Lima’s traditional hold on power. We must hope that these same political actors and social movements that helped bring Humala to power will now force his government to carry through the economic, political, and social reforms that the social movements demand to move the country beyond neoliberalism.