Critics say her prosecution on coup charges violates due process, but the Bolivian state has a responsibility to seek justice. 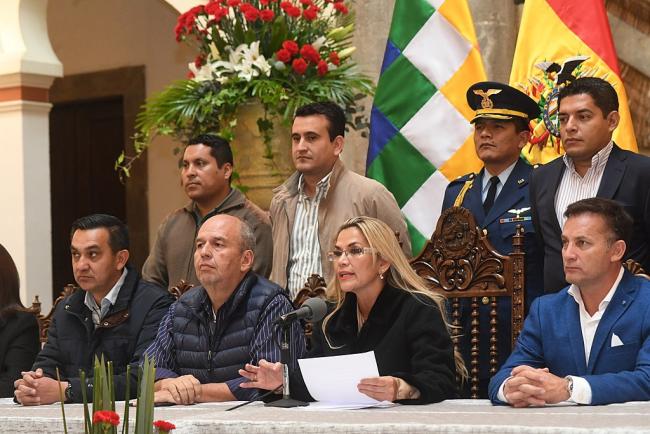 On the morning of April 8, Bolivia’s ex interim president, Jeanine Áñez, was escorted to a large room inside Miraflores women’s prison in La Paz. The white walls, tiled floor and diaphanous light coming in through the curtains gave the room an almost clinical air. It wasn’t the court hearing she’d been hoping for.

Áñez is on trial over accusations that she came to power via a coup after the forced resignation of former president Evo Morales in November 2019. As a small audience of lawyers, guards and medics looked on, their expressions inscrutable behind white N95 masks, she spoke for almost 40 minutes, protesting her innocence and decrying what she describes as a political trial against her.

“Gentlemen of the court, I didn’t lift a finger to get to the presidency,” she insisted. Formally, she is charged with breach of duty and adopting rules contrary to the state constitution and laws. If found guilty, she could face 12 years in jail. This trial, known as “Coup II,” focuses exclusively on the coup accusations and will not look at grave human rights violations committed during her presidency.

Many in the human rights community feel that holding Áñez accountable for her deeds is a crucial step towards justice. But others say she isn’t getting due process, which they fear could undermine faith in the proceedings and set a dangerous precedent, provoking a complex and polarized legal and social debate.

The trial comes just after a UN Special Rapporteur on the independence of lawyers and judges visited Bolivia at the government’s invitation. Following Áñez’s arrest, Human Rights Watch expressed concern that Bolivia’s justice system was “pliant to those in power” under Áñez, Morales, and current president Luis Arce alike, concerns echoed by Amnesty International. Áñez and her family claim she’s a political prisoner.

“Mrs Jeanine Áñez isn’t a political prisoner, she’s a politician who’s in prison,” tweeted Paulo Abrão, former executive secretary of the Inter-American Commission on Human Rights. “The struggle against attacks on democracy goes hand in hand with the struggle for human rights. Bolivian justice has taken a step in favor of the victims and a key step towards non-repetition.”

Áñez became president on November 12, 2019, two days after Morales, an Indigenous leftist who ruled for almost 14 years, was forced to step down. Controversial allegations of electoral fraud sparked deadly nationwide protests, the police mutinied, and the military “suggested” that he resign. Bolivia had no president for two days. Following a series of murky negotiations, Áñez, a politically obscure far-right senator from the tropical department of Beni, assumed the presidency based on her role as second vice-president of Bolivia’s senate. Morales’ Movement Towards Socialism party (MAS, by its Spanish initials) was voted back into power in October 2020 in a landslide, this time with former finance minister Luis Arce in the top job. Áñez was arrested on charges of terrorism, conspiracy, and sedition in March 2021.

A Lack of Accountability

The chaotic events spanning Morales’ resignation and Áñez’s inauguration are likely to prove key in the coup deliberations. Along with Morales, Vice President Álvaro García Linera and the leaders of the senate and lower house of Congress had resigned. Bolivia’s constitution doesn’t establish succession beyond these figures, stating instead that congress should convene to determine a new leader. Bolivia was faced with a power vacuum that urgently needed to be filled. On November 12, the constitutional court issued a communiqué stating that Áñez could rise to the top job, drawing on a ruling made in 2001. Her lawyers claim that this means that her presidency was constitutional. But her opponents argue the court’s statement didn’t constitute a formal ruling.

A legal battle over the role of president of the House of Representatives could also complicate the case, according to Dr. Jorge Derpic, Assistant Professor of Sociology and Latin American and Caribbean Studies at the University of Georgia. President of the lower house, Victor Borda, resigned after a mob of anti-MAS protesters burned down his house and kidnapped his brother. The vice-president of the lower house, Susana Rivero of the MAS party, announced her intention to resign, prompting second vice-president Margarita Fernández to claim that the position of head of the chamber should have gone to her. But last year, the constitutional court rejected Fernández’s claim on the grounds that Rivero was still technically in her job at the time Áñez took power. That raised the question: if the court recognized that Rivero was entitled to lead the lower house when Áñez was sworn in, didn’t that mean Rivero was ahead of Áñez in the chain of succession?

Another point of controversy is the decision to prosecute Áñez in an ordinary trial. In Bolivian law, ex-presidents face a special process known as a “trial of responsibilities,” which was used to convict former dictator Luis García Meza of human rights violations in 1993. The coup deliberations have been split into two trials, with prosecutors arguing that the Coup II offenses took place before Áñez became president, so she can be tried as an ordinary citizen. The main concerns are that refusing a trial of responsibilities would constitute a violation of due process and that she should not face multiple trials over the same series of events, under the principle of concurrent offences.

“Let’s say a burglar gets into a house, steals something, and shoots the owner. You’re not going to have a trial for burglary and another for shooting the owner,” Derpic said. “You’re going to merge them.”

Independently of the dispute about whether Áñez committed a coup, many human rights defenders argue there’s a strong case against her for the human rights abuses that happened on her watch. Just days after her inauguration, she signed a decree relieving the security forces of legal responsibility for actions taken to “pacify” the country, which was still gripped by protests. As if on cue, they gunned down 10 demonstrators as they marched through the town of Sacaba. Four days later, they committed another massacre, killing 11 protesters who had been blockading a gas plant in the El Alto district of Senkata.

During her year-long interim government, many politicians from MAS were persecuted and imprisoned or went into exile. Violent right-wing biker gangs carried out racist attacks on Indigenous people. Human rights defenders faced persistent attacks and threats. In one instance, a woman walked into the office of the Cochabamba human rights ombudsman’s office with a loaded gun in her bag. And when Argentine rights defenders travelled to Bolivia, images were circulated online of Che Guevara’s corpse with the words: “This was the last Argentine to meddle in Bolivia’s internal affairs.”

Meanwhile, victims’ groups say the government and judiciary are privileging the coup trial over the massacre investigation and blurring the line between the two for political purposes. David Inca, an activist with the El Alto Permanent Assembly for Human Rights, said that murder cases relating to the massacres were filed in 2019, but have seen little progress. The victims listed in the two coup trials are Morales, García Linera, former senate president Adriana Salvatierra, and Borda. “These two cases don’t include our 20 brothers who were murdered, over 100 who suffered bullet wounds, or those who were tortured during Mrs. Áñez’s mandate,” he said.

Inca suggested arranging a hearing in which senators state whether they support a trial of responsibilities. This would give victims’ groups the evidence they need to prove they can’t get justice at home, paving the way for an international trial. Human rights probes have unanimously concluded that the Bolivian security forces were responsible for the killings in Senkata and Sacaba. A group of independent experts from the IACHR said in an August report that they had “no doubts” about classifying both incidents as massacres.

Critics allege that prosecuting Áñez in an ordinary trial effectively distorts the law for political purposes. However, Becker argued that it’s important for the Bolivian government to explore all possible legal avenues to prosecute Áñez domestically because it has a legal responsibility to provide justice for its citizens.

Derpic believes Áñez should stand trial for the massacres but fears that the approach to the current trials means broader democratic issues for which MAS also bears responsibility—such as Morales’ decision to ignore a 2016 constitutional referendum and seek the right to indefinite reelection—risk being “swept under the carpet.”

Amy Booth is a freelance journalist whose work focuses on social issues, human rights and politics in Argentina and Bolivia. She writes for outlets including The Guardian, Vice, New Internationalist and the Lancet.

A version of this piece first appeared on the Pirate Wire Services newsletter.