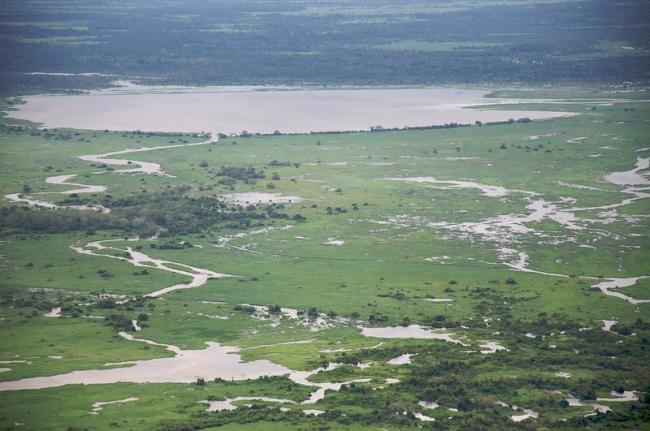 In early May, U.S. President Donald Trump promised to send Bolivia’s right-wing interim government, led by Jeanine Áñez, $750,000 for testing equipment and 250 ventilators. As Latin America becomes the latest epicenter of the coronavirus pandemic, Trump said the delivery would be made “as soon as possible” to fortify the country’s response.

A U.S. president reaching out to aid the Bolivian government would have been unthinkable just months ago. The U.S. government appears to be salvaging its checkered past with Bolivia, especially regarding anti-drug efforts. The Trump administration threw its support behind Morales’s ouster in a November 2019 coup following the contested presidential election, calling it a “significant moment for democracy in the Western Hemisphere.”

However, while the United States is working to improve relations with Bolivia, it has mischaracterized the Áñez administration’s anti-drug efforts and been silent on a growing list of issues involving the interim government. Improved bilateral relations have come at a cost, and overlooked the persecution of coca growers, human rights abuses, and attacks on those opposed to the current administration.

The U.S. State Department has called the bilateral relationship between the two countries “strained” in years past. That’s somewhat of an understatement; in 2013, former President Morales expelled the United States’ Agency for International Development (USAID) for allegedly trying to undermine his government. Before that, in 2008, Morales kicked out the U.S. Drug Enforcement Administration (DEA) and the U.S. ambassador to Bolivia for allegedly promoting “the division of Bolivia” and conspiring “against democracy,” among other things, according to a Wikileaks cable released in 2011.

Morales combatted drug trafficking without U.S. backing using his own strategy of acknowledging traditional uses of coca—the base ingredient for cocaine—and working with coca farmers.

Alleged links to criminal activity have long dogged Morales and his Movement Towards Socialism (Movimiento al Socialismo, MAS) party. In 2011, the DEA indicted several senior members of his administration in connection to an alleged cocaine trafficking ring.

One of those arrested for heading the network, René Sanabria Oropeza, who was Bolivia’s anti-drug chief from 2007 to 2008, later pleaded guilty to drug trafficking charges and was sentenced to 14 years in prison.

The MAS party and Morales came under fire following the contested October 2019 elections, and he was eventually pushed out of office and into exile. But the former president has never been charged or arrested for links to the drug trade.

“The transitional government has made important strides in drug interdiction and extradition of drug traffickers,” the U.S. State Department’s Bureau of International Narcotics and Law Enforcement Affairs (INL) said in its 2020 International Narcotics Control Strategy Report (INCSR). The report added that “some of Bolivia’s most important drug interdiction and incineration cases occurred under the transitional government.”

But the facts don’t back up that claim. The INCSR report covered the entirety of 2019, a year in which Áñez and the interim government were in office for just two months. Drug seizures during that time were no higher than in previous years. In fact, according to data from Bolivia’s Special Anti-Drug Trafficking Force (Fuerza Especial de Lucha Contra el Narcotráfico, FELCN), they were actually much lower. 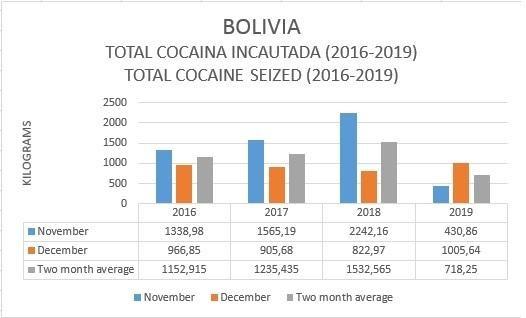 In addition, incinerating illegal drugs are not “cases” that can be attributed to a single government. The United Nations Office on Drugs and Crime (UNODC) oversees this process in Bolivia, and didn’t present its report on incinerations until the end of January 2020, falling outside the scope of the State Department’s INCSR report.

The INL would not answer questions about these apparent discrepancies or provide examples of stepped up interdiction efforts under Áñez. “The transitional government of Bolivia has made important progress in combating drug trafficking by extraditing two known drug traffickers and expediting proceedings for 14 more,” a State Department official from the INL said in an email.

The “Narcojet” case is arguably the most high-profile drug seizure linked to Bolivia so far in 2020. On January 28, Mexican security forces seized one ton of cocaine from a plane flown by two Bolivian nationals that had landed on the country’s Caribbean coast after departing Argentina, according to a government press release. But it does not appear the Áñez government played any role in the bust.

Mexican authorities detected the flight and coordinated with their counterparts in Argentina to help force the plane to land, according to local media reports. What’s more, Argentine authorities confirmed that the Áñez government “did not collaborate” with this interdiction effort, according to the Andean Information Network (AIN), which studies drug policy and anti-drug efforts in Bolivia.

Before arriving in Mexico, the plane reportedly made a stop for refueling and other checks at the Guayaramerín Airport in northeast Beni department along the border with Brazil. However, none of the airport’s usual control mechanisms—including the presence of the military and staff from the General Directorate of Civil Aeronautics (Dirección General de Aeronáutica Civil, DGAC) and the Airport Administration and Auxiliary Services to Air Navigation (Administración de Aeropuertos y Servicios Auxiliares a la Navegación Aérea, AASANA)—were present, according to local news organization El Deber.

Beni is the home department of Áñez and a number of other officials in her cabinet, as well as a strategic crossing point for Bolivian cocaine entering Brazil and where drug flights frequently move in and out of, according to Kathryn Ledebur, the AIN’s executive director. Not only did the interim government not play a role in detecting or stopping the “Narcojet,” but the flight passed directly through Añez’s home turf.

Áñez is also linked to alleged drug traffickers. Years before becoming president, in October 2017, Áñez’s nephew, Carlos Andrés Áñez Dorado, was arrested in Brazil alongside Fabio Adhemar Andrade Lima Lobo, the son of former Cali Cartel member Célimo Andrade Quintero, after landing in the country with nearly half a ton of cocaine.

But beyond questions about the Áñez government’s role in and commitment to anti-drug efforts, there have also been other concerns. In early February, Áñez appointed Fernando Gustavo Álvarez Peralta as the General Director of Agricultural Production and Food Sovereignty under the Ministry of Rural Development and Land. A week later, Álvarez Peralta abruptly announced his resignation due to what he called “health problems.”

Álvarez Peralta’s alleged links to international drug trafficking are likely what caused him to leave his post so quickly. In August 2017, a DEA investigation led the U.S. Treasury Department’s Office of Foreign Assets Control (OFAC) to sanction Álvarez Peralta for allegedly “materially assisting in, or providing financial or technological support for or to, or providing goods or services in support of, the international narcotics trafficking activities” of a Mexican drug trafficking organization headed by Raúl Flores Hernández.

"He worked for not even a week in the ministry. … I understand that he was recommended by a high-ranking politician from Santa Cruz. He presented his [criminal and judicial records] where he had no crimes, and when we found out that the man had problems, he was immediately dismissed," Interior Minister Murillo told the local press.

However, even amid the seemingly improving relations between the United States and Bolivia, Álvarez Peralta has not been handed over to U.S. authorities. When asked about the case, representatives of the INL and DEA both said they could not discuss U.S.-Bolivia anti-drug work or the case due to it still being active and ongoing.

“One would expect that turning over Álvarez Peralta would be an easy diplomatic victory for Áñez, yet he still walks free in Bolivia and there doesn’t appear to be any effort under way to work with the United States on capturing him,” Ledebur, of the Andean Information Network, said.

While the U.S. government has in the past openly criticized the Bolivian government under Morales for having “failed demonstrably” in anti-drug efforts and challenged their strategies, the Trump administration has not shown the same desire to probe Áñez’s interim government.

“Despite allegations of corruption, the United States has thrown a bone to Áñez for things that happened outside her time in office,” said Ledebur. “Right now, there is no oversight of this government or direction for anti-drug forces in any respectable way, which creates chaos for those forces and the people in the regions where they work.”

Indeed, the military fired on and killed 10 mainly Indigenous coca growers peacefully protesting Morales’s departure during a November 2019 rally. Thousands of locals had gathered in the town of Sacaba before attempting to cross a military checkpoint near Cochabamba when soldiers began shooting. The interim government has yet to hold those responsible for the massacre accountable, despite overwhelming evidence implicating those involved.

While the Áñez administration has spent less than a year in office, current praise coming from the United States suggests that monitoring anti-drug efforts and other allegations of official misconduct at a time of great uncertainty ahead of September elections in Bolivia is far from a top concern.

Devoid of any real accountability, this renewed relationship may plunge Bolivia back into a U.S.-backed anti-drug strategy defined by hardline policies and the repression of coca growers, which the Morales administration had been trying to work with to sustain the legal coca market and combat the illicit cocaine trade.

In Colombia, the world’s top cocaine producer, more coca is being cultivated and cocaine produced than ever before despite decades of U.S. support and millions of dollars of anti-drug trafficking aid.

In January, a White House statement said restoring assistance to Bolivia is “vital to the national interests of the United States.” Trump’s support to the Añez’s interim government, whatever its motivations may be, could make anti-drug work in the Andean region—which grows nearly all of the world’s coca—even more futile.

Parker Asmann is a journalist who writes about human rights, security policy and organized crime across Latin America and the Caribbean.