Book Talk on Cuban Immigration Gets Heated in Miami

An event at Florida International University provokes a backlash, stoking longstanding disputes between academia and the Cuban exile community in Florida. 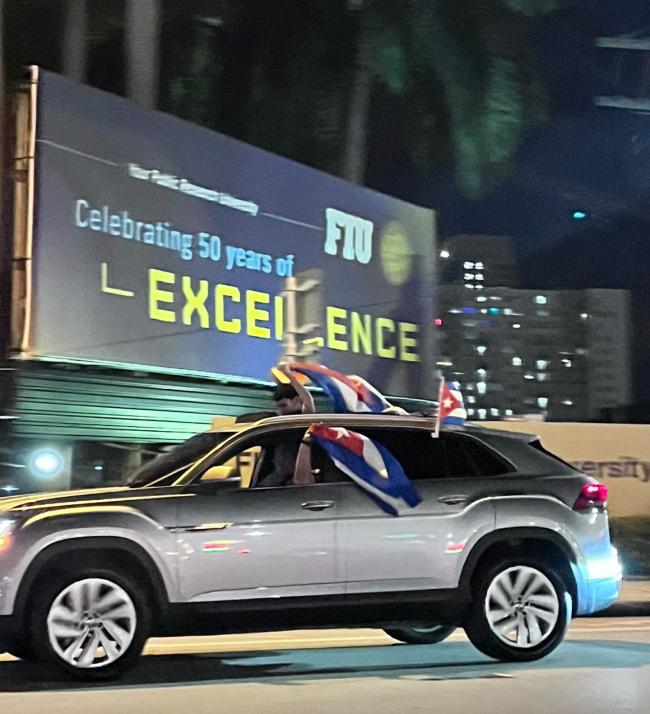 On December 9, Miami’s Florida International University’s Cuban Research Institute (CRI) hosted a book presentation by Boston University sociologist Dr. Susan Eckstein. The book to be presented was Eckstein’s most recent work: Cuban Privilege: The Making of Immigrant Inequality in America, which seeks to “describe and explain U.S. Cuban immigration policy, and its unintended as well as intended consequences, from the time Castro assumed power in 1959 through the first non-Castro to become head of state in October 2019.” The event was posted on CRI’s social media a month before the presentation, and was poised to be an ordinary event in the CRI’s series of book talks on Cuban and Cuban American subjects at Miami bookstore Books & Books’ flagship location in Coral Gables.

Even with a provocative title and blurb, the event largely went unnoticed for a few weeks. However, it soon caught the eye of newly elected Miami-Dade County Commissioner Kevin Marino Cabrera, in whose district the Books & Books flagship location lies. Cabrera put out a statement condemning the CRI’s sponsorship of “an event that fuels hate against the Cuban Exile Community.” Leading up to the talk he made many appearances on both Spanish and English-language media, and was able to cultivate so much negative attention that the University added an additional discussant, Cuban American scholar and activist Dr. Orlando Gutiérrez-Boronat, to represent an opposing point of view. At the event, Gutiérrez-Boronat began his address by thanking Cabrera, a 32-year-old FIU graduate and the son of Cuban exiles, for his efforts in bringing the event to light.

Commissioner Cabrera openly admitted to not having read the book before releasing his statement. However, his comments set off a public backlash, primarily on the CRI’s social media platforms but also through threatening calls and emails to CRI staff. An array of Florida politicians, from Florida state representatives to a sitting U.S. congresswoman, joined the online condemnations. The Cuban American influencer Alex Otaola talked about the event on his nightly show, “Hola Ota-Ola,” with lengthy diatribes against Eckstein, or “Susanita,” as he called her, as well as against FIU for hosting the event. Otaola called on his followers to protest the talk, first in front of Books & Books and, once the event was moved to FIU to accommodate a larger audience, in the form of a caravan of vehicles encircling FIU’s Modesto Maidique Campus prior to and during the discussion.

As Eckstein herself acknowledged, this was not a traditional book presentation, as was evident in the Q&A portion of the event. The audience included a wide range of FIU and Miami voices: veterans of the Brigada 2506, who carried out the failed Bay of Pigs Invasion in 1961; FIU professors and students who both condemned and supported the author; and well-known Cuban American radio commentator Ninoska Pérez Castellón, who issued a scathing critique of the author as “entertaining/defending the Communist regime in Cuba.” Both during the Q&A and following the conclusion of the event, audience members could be heard yelling “¡Libertad!” (Freedom!)  and “¡Abajo el comunismo!” (Down with communism!). Noticeably absent from the event was Commissioner Cabrera himself.

While this is his first elected position, Cabrera most certainly recognized the political gains to be won by playing on the collective trauma and fears of his constituents. He directed former President Donald J. Trump’s successful 2020 reelection campaign in the state of Florida, which relied heavily on stoking fears of socialism among Cuban and other Latin American migrant communities. Prior to that, Cabrera worked as a senior aide to then-Republican congressman for Florida’s 26th district Carlos Curbelo. He was later filmed alongside members of the  hate group Proud Boys, which has a stronghold in south Florida, yelling profanities and accusations of being a Communist at then-U.S. House Minority Leader Nancy Pelosi during a campaign stop in Miami. Even Florida Republican Senator Marco Rubio condemned the group’s tactics, comparing them to the notorious “acts of repudiation” staged by Cuban government-organized mobs against dissenters and those wishing to leave the country, most famously during the 1980 Mariel Boatlift.

Cabrera is not the first South Florida politician and FIU alum to go after his alma mater. Former U.S. Representative and Florida State Representative David Rivera made a career on rallying his Cuban American constituents through tough stances on Cuba, particularly targeting academics who went to the island for research or took students there. During the 2004 legislative session, he introduced the unsuccessful HB 1193, which sought to require university personnel to provide the Florida Department of Education detailed information on trips to states on the U.S. State Sponsors of Terrorism list, which still includes Cuba.

When FIU faculty member Carlos Álvarez was arrested in 2006 for being an unregistered agent of a foreign government—in this case Cuba—Rivera leveraged the news to pass even stricter legislation in Florida, specifically SB 2434, often called the “Travel Act” or the “Rivera Law.” The bill, signed into law by then-Florida Governor Jeb Bush in 2006, prohibits the use of both public and private funds by state universities to “implement, organize, direct, coordinate, or administer activities related to or involving travel to a terrorist state.” In other words, Florida public university money, even that from private sources, could no longer be used to fund travel to or from Cuba. This circumvented U.S. law regarding travel to Cuba, which has long permitted researchers to go to the island to carry out their work.

Rivera was elected to the U.S. House of Representatives in 2010, filling a seat vacated by fellow Miami Cuban American Mario Díaz-Balart. His career in the House of Representatives was short-lived, however; in 2014 Rivera lost his reelection campaign following revelations that he had secretly funded a challenger to his presumed Democratic opponent, and he has not held elected office since. Earlier this month, Rivera was indicted on charges including conspiracy to commit money laundering and, ironically, being an unregistered agent of a foreign government, in this case Venezuela, a staunch ally of the Cuban regime.

Eckstein’s book attempts to show that Cuban immigrants to the United States have enjoyed a variety of unique policies that, while not stagnant, have nonetheless provided paths to residency and eventual citizenship, such as the 1966 Cuban Adjustment Act, which remains in effect today. Furthermore, the text also acknowledges the Cuban government’s own historical role in mass migration from the island, seeing it as politically advantageous to let the disaffected leave the country. However, in drawing comparisons with other Latin American and Caribbean migrant populations, Eckstein stoked longstanding sentiments among the Cuban American exile community that their struggle is discounted by the political Left. Such attitudes are heightened during a period of dramatically increased economic precarity and political repression on the island that has led to more than 227,000 Cuban migrants attempting to enter U.S. territory irregularly from December 2021 to December 2022 alone, a figure which far surpasses the 125,000 Cubans who arrived during the 1980 Mariel Boatlift. In this context, coupled with Florida Governor Ron DeSantis’s public attacks on academic freedom in the state university system, Eckstein’s text reignites a longstanding accusation of academic bias in favor of the outcomes of post-1959 Cuba. For example, many Cuban intellectuals in exile, including the late writer Reinaldo Arenas, have struggled to make their international colleagues understand their lived experiences in Cuba, as many supported Fidel Castro and his government.

In her work on the Cuban exile community, the Cuban American scholar María de los Ángeles Torres has observed a kind of mirroring of the hardliners of the Miami Cuban exile community and the authoritarian regime on the island. The tactics of critique are eerily similar. While in Cuba a dissenter, or anyone who challenges the status quo, is often called “an agent of the CIA” or other beneficiary of a foreign entity, anyone who deviates from the official anti-Castro ideology in Miami is quickly accused of being “a Communist” or “a spy for Castro.” While proclaiming to be staunch supporters of democracy in Cuba and the Americas, the actions of Cabrera and Rivera replicate this kind of mirroring. Apart from staging a stateside act of repudiation, Cabrera engaged in censorship by asserting his view that the CRI should not in any way sponsor Eckstein’s talk, furthering a long-held assumption in academic circles that there are limits to what one can do and say regarding Cuba in Miami. Rivera, for his part, attempted to censor and limit scholarly research on the island, restricting the free exchange of ideas and research between academics in Florida and Cuba. Rather than promoting democracy and free speech, both Cabrera and Rivera have attempted to restrict and silence.

Despite the efforts of Cabrera and other community figures, the CRI successfully hosted a lively debate involving a range of voices and viewpoints. At the beginning of the Q&A, the president of the Veterans of Brigade 2506, Rafael Montalvo, began his question by saying: “For those of us, and there are many here, that have put our lives on the line to gain the freedom of free speech, I really congratulate everyone for what we’re doing here.” Much like some of their island counterparts, both Cabrera and Rivera missed the point of engaging in the very debates that differentiate a democracy from a dictatorship: namely, the defense of free speech.

Katie L. Coldiron is the Digital Archivist of the Wolfonsian Public Humanities Lab at Florida International University, as well as a doctoral student in the FIU Department of History. She holds an M.S. in Information Studies from the University of Texas at Austin and an M.A. in Latin American Studies from the University of Florida. Her research and professional interests include Latin America and the Caribbean (with emphasis on Cuba and Colombia), South Florida, digital humanities, public-facing scholarship, and intellectual history. She can be found on Twitter: @katielcoldiron.