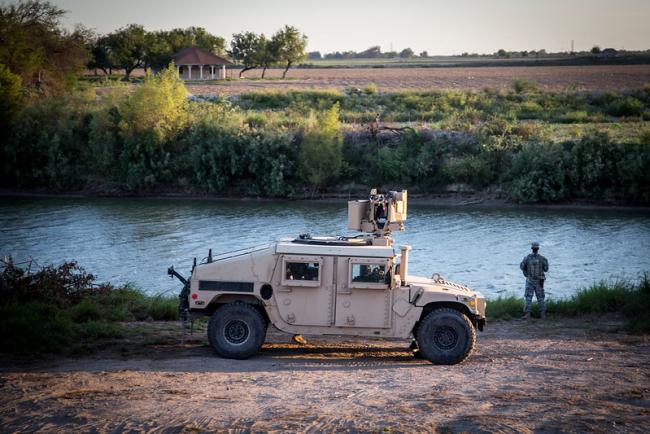 In the last few months, the U.S.-Mexico borderlands have seen the mowing down of scores of tree-like saguaro cacti, and the blasting of Native American burial sites. The ecologically-rich region has also witnessed the destruction of wildlife refuges.

These are just some of the deleterious results of the Trump administration’s border wall-building efforts, which have intensified markedly in the context of the coronavirus pandemic. Days after the White House declared a national public health emergency in the face of Covid-19 on March 13, U.S. Customs and Border Protection (CBP) announced that it would build or replace 91 miles of barriers in southern Arizona by installing 30-foot high “bollard fencing.” Within a week, the wall-building plans had expanded to a total of 150 miles in Arizona, California, and New Mexico, adding to construction that was already taking place in 15 sites in those states and Texas.

In Texas, where much of the land abutting the international divide is privately held, the federal government has intervened to confiscate landed property. As of mid-April, the administration had filed at least 26 cases over a three-month period aimed at forcibly acquiring land from private property owners in the state. The number of cases accelerated in the context of the coronavirus, a time when people’s ability to context federal efforts is diminished.

As Ricky Garza, a Texas Civil Rights Project staff attorney, explained in reference to federal authorities’ land-grabbing efforts, “They are trying to take advantage of the pandemic, when lawyers are not going to be as willing to take cases and many people are sheltering in place... ...They are asking our clients to make an impossible choice: between their health and defending their homes.”

Such boundary-building environmental appropriation and transformation are not exclusive to the Trump administration. Indeed, as C.J. Alvarez, a historian at the University of Texas at Austin, demonstrates, they have always been central to the making of the U.S.-Mexico divide—and the border region more broadly. In his illuminating book, Border Land, Border Water: A History of Construction on the U.S.-Mexico Divide, Alvarez tells a rich story of “what a constellation of government organizations and private contractors have built on the international divide,” and, in doing so, remade the region’s “nature.”

For Alvarez, the will to control nature and efforts to regulate people in the borderlands are tightly linked. He demonstrates this through a unique focus on the built environment and the work that infrastructure does on ideological, political-economic, ecological, and spatial fronts. While institutions and individuals in Mexico are part of Alvarez’s erudite account, it is heavily weighted toward the United States given that the latter has undertaken the lion’s share of the building, and the associated destruction.

Alvarez’s tale starts in the 19th century when surveys of the boundary and related cartographic representations established the national territorial limits of both countries. They also helped to produce meanings of the borderlands and the peoples who inhabited it. In exploring these meanings, Alvarez shows “how ideas about the natural world, race, and violence were tightly linked to the border region.” For nation-state-associated border builders on both sides of the international line, those ideas were, almost without exception, negative. The desert loomed large and, with it, a perception of “nothingness.” To the extent that people living in the region were acknowledged, notions of barbarism dominated. In this manner, surveys of land and water in the borderlands “inaugurated a long tradition of not only physical construction on the line but also skepticism, dismissiveness, and revulsion about desert environments and people.”

These lenses were central not only to the nation-state project, but to the interests of industry and agriculture. They also contributed to the ideological foundation that championed the need to protect order in the borderlands, one amenable to capitalist profiteering, in addition to state control. Such profiteering—especially in the mining sector—grew quickly. By 1910, the same year the Mexican Revolution erupted, 31 U.S. companies owned almost 16 million acres in the Mexican state of Chihuahua alone—about a quarter of the country’s largest state—Alvarez reports.

Protecting these investments heavily informed the U.S. government’s response to the Revolution, helping to bring about what Alvarez characterizes as “a modern militarized police zone” in the borderlands. U.S. military deployments to the region were “unprecedented in both size and scope.” Despite the demands for soldiers during World War I, the United States maintained a force of more than 30,000 along the boundary. This contributed, Alvarez argues, to the perception that a permanent civilian border patrol was needed. (The federal government established the U.S. Border Patrol in 1924.)

Beyond military deployment, the creation of “order” necessitated a heavily engineered environment, particularly in relation to water. Overcoming the supposed worthlessness of the desert required the diversion of river water. Central to this effort was the work of the International Boundary and Water Commission. During the twentieth century, it evolved “from a bureaucracy dedicated primarily to small land claims arbitration along the border rivers to an engineering agency that executed massive reconfigurations of the physical shape and flow capacity of the Rio Grande and beyond.”

Much of the reconfiguration was tied to irrigation projects. Such undertakings contributed to higher land values and greater tax burdens on those who possessed land, a development that disproportionately impacted smaller, family farms and, thus, U.S. citizens of Mexican descent in the borderlands. In other words, as Alvarez illustrates through an examination of the early decades of the 1900s, irrigation projects facilitated land consolidation and served the interests of large landowners and facilitated the dispossession of those subsisting on the region’s socio-economic margins. And by contributing to the making of industrial agricultural enterprises, they also facilitated increased labor migration from Mexico.

Engineered waterways also helped to strengthen the border policing apparatus at times. The All-American Canal, in which the diverted waters of the Colorado River flow and which feeds the Imperial Valley’s agricultural industry in southern California, for example, serves as a formidable barrier to unauthorized border crossers.

Irrigation projects were just one type of infrastructure that reshaped the borderlands. But, for Alvarez, whether the undertaking involved “river rectification” or the building of dams, fences along the boundary, or surveillance towers—examples of all of which he explores in detail—they rested upon a common ideological foundation. It is one that understands physical construction as “a central means of affecting control over other people as well as the nonhuman world.”

Of course, borderland infrastructure is not simply about separating Mexico and the United States. Indeed, it has long been primarily concerned with connecting the two nominally distinct countries. But just as the engineered environment had many unintended consequences—dams leading to the buildup of sediment, which limits the capacity of reservoirs, for instance—so, too, has cross-border transportation infrastructure. Aimed at augmenting commercial ties, it has also inadvertently (but unsurprisingly) limited the efficacy of the policing apparatus and strengthened illicit transboundary markets.

In both cases, “compensatory building” is the response. In other words, failure and unexpected consequences lead to more of the same. Thus, “flooding and silt accumulation that resulted from the damming and canalization [have been] met with even more excavation, vegetation clearing, channeling, and damming.” Similarly, the effective refusal of Mother Nature to lend itself to the needs of the state has led to growing efforts to shape the environment. In January, a Quartz article spoke to the variety, depth and breadth of the ecological challenges faced by those who seek to build a borderlands of surveillance and control. Entitled “A giant kettle of vultures has encrusted a CBP radio tower at the US-Mexico border in feces and vomit,” the article reported on scavenging birds of prey that reduced the life of the communications infrastructure.

Meanwhile, the persistence of extralegal activity—manifesting the “the resilience [and strengthening] of the physical connective tissue joining the United States to Mexico”—has repeatedly contributed to the growth of the financial and political blackhole that is “border security.” It is for such reasons that Alvarez labels U.S. interventions in the borderlands on both the environmental and political-legal fronts “unsustainable.”

Perceiving that unsustainability is not easy, as the infrastructure that embodies these interventions stymies alternative modes of seeing and being. The built environment, Alvarez declares, “produces new ways of thinking, of imagining space, of believing.” And these “new ways”—ones he traces back to the 19th century—are now deeply embedded in the political mainstream in the United States and Mexico. So, even though “notions that the border is an intrinsically dangerous place and that deserts are nothing more than ‘wastelands’ are now threadbare stereotypes… … they remain as resilient now as they ever were.” This unwelcome form of resiliency is compounded, he suggests, by the ascendancy of neoliberal policies and associated ways of seeing.

It is Alvarez’s hope that “recuperating the history of a region artificially unified through war and political fiat but now concretely unified through a strong of physical construction projects” will allow us to imagine the borderlands as something other than “either a wasteland or a pathological zone.”

Informed by impressive archival research, Border Land, Border Water provides a valuable and highly original perspective on the United States-Mexico borderlands. As stated in its introduction, a central goal of the work is “to recover the heterogeneity and diversity of space often cast as monolithic.” In helping us to see underneath and beyond the infrastructure that litters the borderlands and that so many take for granted, C.J. Alvarez allows us to see what was lost, and imagine what have could have been. Most importantly, perhaps, he challenges us to bring about a different borderlands, one that embodies “ecological stewardship, deeper cultural understanding, and peace.”