Beyond the parallels with the U.S. Capitol riot, the latest assault on Brazil’s democracy is marked by Washington’s long history of anti-democratic foreign policy. 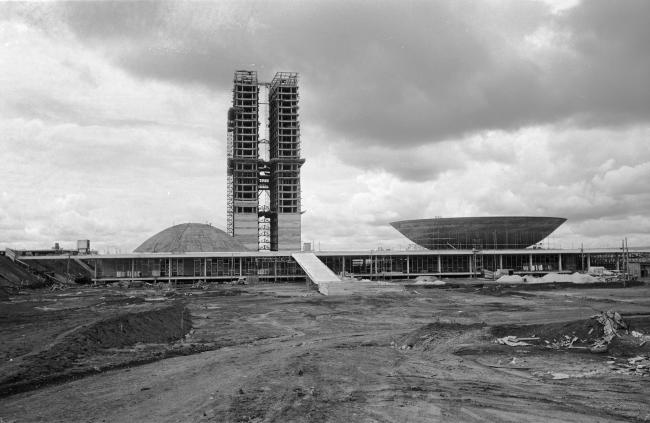 Looking back at Thomaz Farkas’s 1959 photograph of Brazil’s National Congress under construction, it’s all too easy to imagine we’re actually seeing a dystopian future daqui a alguns anos à la filmmaker Kleber Mendonça Filho: a landscape of democracy under deconstruction. Those architectural symbols, like Alfredo Ceschiatti’s statue of blind justice defaced in January 8’s violent events, have never actually guaranteed democracy. In fact, Brasília is surrounded by its alter image: marginalized satellite cities housing the impoverished workers who built the capital and who continue to supply its underpaid labor.

But the January 8 occupation of Brasília was not about the yawning breach between the great promise of Brazil’s democracy and its imperfect practice. The mostly white and male mob that took the capital and destroyed democracy’s symbols was not there to rouse justice or set her scales on the level. Rather, the enormous banner they unfurled before the towers of Congress, which read “intervenção,” was an explicit call for democracy’s abrogation via military intervention, and indirectly, intervention by Washington.

January 8's entire pathetic mise en scène attempted to reenact the 1964 military intervention that inaugurated 20 years of dictatorship in Brazil. The discourse and symbols of Bolsonarismo—chauvinist “family values,” religious intolerance, nationalism, militarism—are all borrowed secondhand from the military dictatorship. Bolsonaro’s rhetoric of taking back the nation from “pathological leftists” (esquerdopatas) merely rehashes the military’s justification of the 1964 coup as “a revolution” against the “Bolchevization” of Brazil.

In this sense, January 8's attempt to invalidate election results by force staged a kind of grotesque pantomime of the January 6 Capitol riot. But the connection to Washington runs deeper, making U.S. condemnation of the attack also somewhat more complicated. The United States’ responsibility for this latest assault on Brazil’s democracy and its promise for a better, more just, and more equitable future goes well beyond Donald Trump’s abysmal example. The April 9, 1964 Institutional Act inaugurating the military dictatorship claimed that “constitutional processes had failed to remove an [illegitimate] government,” making military intervention necessary for the “economic, political, financial, and moral reconstruction of Brazil.” As detailed in the 2014 report by Brazil’s National Truth Commission, the United States military and CIA helped to violently establish and uphold that lie.

This time, however, as political philosopher Rodrigo Nunes suggests, the international community (for once including Washington) has repudiated the attempted coup, “making the cost of supporting that action, for political and institutional actors who have something at stake (members of parliament and the military), much higher.” But that fact is hardly comforting. Had U.S. strategic interests presently been different, the determination made by Brazil’s military might also have been otherwise. In any case, it is not merely the January 6 Capitol riot, but rather the long anti-democratic precedent set by U.S. foreign policy that constitutes Washington’s enduring contribution to the assault on Brazil’s democracy.

Chris N. Lesser is an ACLS Leading Edge Fellow with Sembrando Sentido and a Visiting Scholar in the Department of Geography at the University of California, Berkeley.