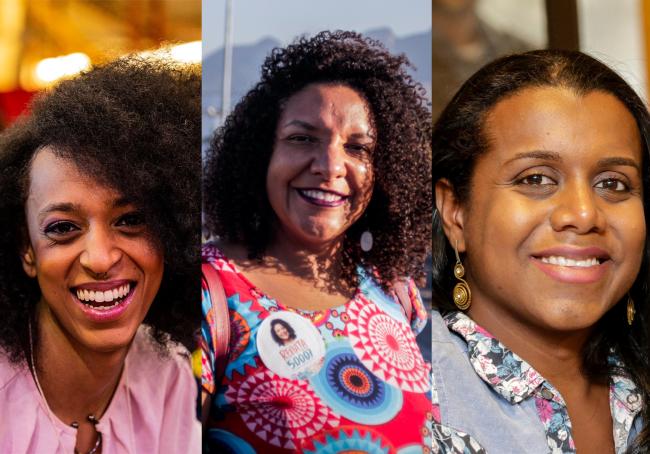 On October 2, Brazilians went to the polls to vote for their next president. Although the race had 11 candidates, the real competition was between rightwing current President Jair Bolsonaro and leftist former president Luiz Inácio Lula da Silva. The two candidates represent very different visions for the country, and the stakes of the race were high.

Throughout the day on Sunday, I checked social media regularly. The early votes showed Bolsonaro in the lead and I began to see messages in Portuguese such as “The Northeast, please save us!” and “The Northeast will arrive!” The Northeast is predominantly Afro-Brazilian, and in the 2014 and 2018 presidential elections Lula’s Workers’ Party (PT) won in the region. In the 2018 presidential election, Workers’ Party candidate Fernando Haddad largely received support from the North and Northeast while Bolsonaro received support from the South and Southeast. Yet, even the Northeast could not tip this election enough to avoid a second presidential round.

For months, news media showed former president Lula leading in the polls, and days before the election he had pulled ahead by double digits. By the end of September, a Datafolha poll showed that, if blank and null voters were not included, Lula was predicted to receive 50 percent of votes compared to Bolsonaro’s 36 percent. I was doubtful Lula would get the required 50 percent plus one vote to avoid a second round election. However, I did not expect a close race.

While waiting for the election results on Sunday, I was one of three co-hosts on Brazil Unfiltered’s live Twitter panel. Moderating a panel with distinguished Brazilian scholars, journalists, and activists helped calm my nerves. However, I remained anxious. As vote returns rolled in and my 9-year old daughter reported real-time results to me, I was overcome with horror. Although Lula led with 48 percent, Bolsonaro received over 43 percent of the vote.

None of the polls predicted Bolsonaro would receive such a high percentage of votes. My mind started racing for answers. Was the outcome a result of social desirability, a concept social scientists consider in survey research? Survey respondents sometimes give answers they believe are socially desirable rather than their true answers. Did the spread of far-right fake news on social media, like in 2018, sway fearful voters to vote for Bolsonaro? While I think both of these are reasonable questions, another danger is that everyone has grown accustomed to media reports of Bolsonaro and his supporters’ outlandish behavior and no longer consider it dangerous.

But the danger is real: at least two Bolsonaro supporters killed Lula supporters leading up to the election. Yet the greater threat that passed under progressive radars is the quotidian violence of everyday citizens who secretly support a leader who values authoritarianism and holds undemocratic values. The media often portrays Bolsonaro supporters as erratic and aggressive, but these results show that they are extremely organized. Not all of them are in the streets screaming at people or attending rallies. Some are everyday people that support authoritarianism and do so quietly.

There are also, however, surprises among supporters for the Left. Many have pointed to Evangelicals as a voting bloc that heavily supported Bolsonaro. It is true that he has made significant inroads into gaining their support. However, my own research has shown that generalizations about Evangelicals ignore that Lula has some of their support. In some cities such as Salvador, São Luis, and São Paulo, Afro-Brazilian women who are social welfare beneficiaries and also largely Evangelical supported leftist political candidates.

A Lula win in the second round is not guaranteed, but is possible. We must not be distracted by public acts of violence, like  Bolsonaro and Lula supporters who fought in Rio on the night of the first round of elections. Another Bolsonaro presidency will also lead to more “quiet violence” such as the continued destruction of the Amazon, more loosening of gun laws, and less funding to public universities.

Going into the second round, progressives must be just as organized and strategic as Bolsonaro’s campaign has been. Lula’s campaign and its supporters will have to work hard to ensure that votes that went to candidates such as Simone Tebet, who won 4 percent of the vote, go to Lula. To be successful, the campaign will have to continue to address accusations of corruption, discuss its support of social programs and university education, and highlight Lula’s past successes. While the campaign has largely focused on Lula as the candidate to defend democracy, it is also important to emphasize how he will guarantee specific elements of that democracy, like education, food, and health.

While the presidential race will be decided in the second round, there were some successes in the congressional and state elections. Brazil elected an Indigenous woman federal deputy, Sônia Guajajara, as well as two Black trans women, Erika Hilton and RoBeyoncé Lima, to the National Congress. There were other Black women victories as well: Talíria Petrone won her race for federal deputy, and Renata Souza won as a state deputy in Rio de Janeiro. Altogether, the number of Black women representatives in the lower house increased from 13 to 29 for the upcoming term. While they are all to be celebrated, the reality is that the number of Black women politicians remains small; the 29 Black women representatives make up only 5.6 percent of the total number of 513 (Afro-Brazilian women make up 26% of the population).

Yet, along with the victories of progressive Black women, 27 new senators were elected, 20 of whom are Bolsonaro supporters. This means that nearly a third of Brazil’s 81 senators in the new term support Bolsonaro’s conservative agenda. They, along with their conservative counterparts in the lower house, will pose a challenge to both Black women in Congress and Lula, if elected. Bolsonaro’s conservative agenda, therefore, will remain even if Bolsonaro loses. One of the most well-known conservative politicians elected to Brazil’s Senate was Evangelical Damares Alves from the Republicanos party, who was Bolsonaro’s Minister of Women, Family, and Human rights. She was a pastor of the Foursquare Gospel Church, and as minister she spoke out openly against sex education. Neopentecostal pastor Magno Malta, from the Liberal Party, was also elected Sunday to represent the Brazilian state Espírito Santo. Conservative politicians like Alves and Malta tend to be against LGBTQI+ rights and women’s rights such as abortion.

While Sunday’s elections did not produce a total shift, the tides have changed. And they will continue to change as Black Brazilians continue to run for office and are able to receive the necessary support to be elected to key political positions.

But for now, the top priority needs to be pooling resources, energy, and efforts to secure a win for Lula on October 30.

Gladys Mitchell-Walthour is the Dan T. Blue Endowed Chair of Political Science at North Carolina Central University and the U.S. Network for Democracy in Brazil National Co-Coordinator. Her research interests include racism and Afro-Brazilian political behavior and opinion, racial identification, black group identity, and social welfare policies. She is the author of The Politics of Blackness: Racial Identity and Political Behavior in Contemporary Brazil (Cambridge University Press, 2018).