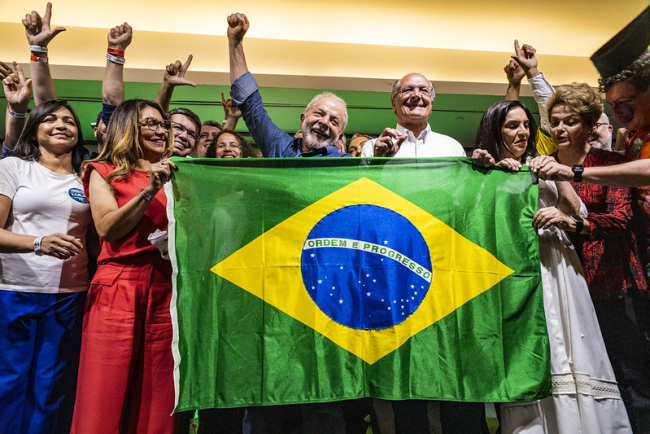 Former President Luiz Inácio Lula da Silva won the Brazilian presidency on October 30th. He defeated far-right president Jair Bolsonaro by just over 2 million votes. Tens of thousands of Lula supporters descended on Sao Paulo’s Paulista Avenue for huge celebrations. Brazil on Fire host Michael Fox was there and he takes us to the streets.

But Bolsonaro supporters were also mobilizing. They shut down highways and called for the military to intervene.

In this second update to Brazil on Fire, we look at Lula’s victory, Bolsonaro’s disinformation campaign that is keeping Bolsonaro’s supporters in the streets, Bolsonaro’s ties to Donald Trump’s former White House strategist Steve Bannon, and how Bannon is trying to spread a fake news fraud narrative to bolster Bolsonaro and divide Brazil, like the United States after Trump’s 2020 defeat. We hear from UFSC International Relations professor Camila Feix Vidal about the shared tactics of the international far-right and University of Virginia Media Studies professor David Nemer about Bolsonaro's unprecedented use of fake news and disinformation in the election.

This is Brazil on Fire, a podcast about Brazil’s descent toward fascism under President Jair Bolsonaro. Over these six episodes, we look at Bolsonaro’s far-right government that has set the country ablaze, and how the United States helped him do it. We visit the birthplace of Brazilian Nazism, evangelical churches, and Indigenous villages in the Amazon.

This podcast is produced in partnership between The Real News Network and NACLA.