Activists from Brazil’s urban peripheries are among the hardest hit by the climate crisis, and they are becoming increasingly active in the fight against it. 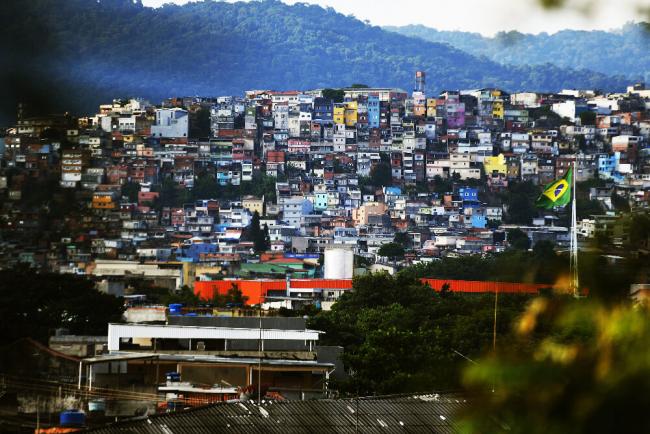 This article was first published in Portuguese by Agência Pública and translated to English by Matty Rose from the Latin America Bureau.

The latest report from the Intergovernmental Panel on Climate Change (IPCC) sounded the alarm: almost half the world’s population is currently living in regions or conditions “highly vulnerable” to the impacts of climate change. Such vulnerability is greater in poorer areas, which face governability issues and limited access to basic services and resources.

Feeling the effects of a warmer planet firsthand, activists from Brazil’s urban peripheries are coming together to make their voices heard in the national and global climate debate. And they are working to put race, social inequality, and climate justice at the heart of their fight.

“Those who contribute most to the climate crisis are not the ones bearing the brunt of its main consequences,” Amanda Costa, 25, argues. 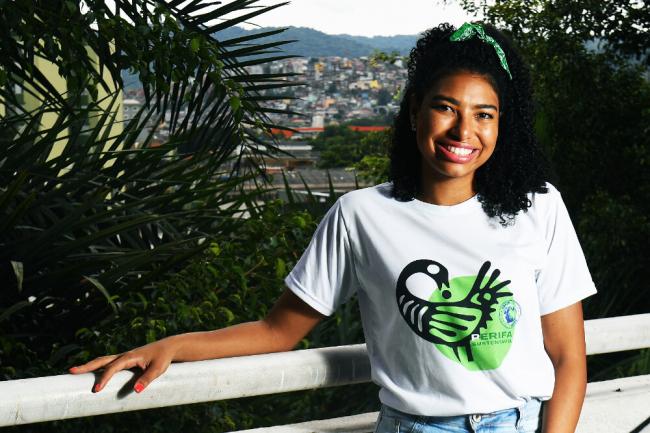 Amanda was born and raised in the district of Brasilândia, in the far north of the São Paulo metropolitan area, and lives there to this day. Her involvement in climate activism started when she was 21, working with the NGO Engajamundo (Engage the World), which works to train and prepare leading youth activists to participate in international political processes, such as COP events, in which Amanda has participated on three occasions.

“When we think about climate justice, we are thinking about it in a broader sense, taking into account the fact that it is the countries from the Global South that mainly suffer the consequences of the development model driven and pursued by countries in the Global North,” she explains.

Despite this, ensuring the debate on climate justice pays attention to race remains a struggle. Such a perspective would bring to the fore questions about environmental racism. Those affected by environmental racism—vulnerable populations in the city and in the countryside—are more exposed to the effects of climate change and are helped less by mitigation and adaptation policies. Generally, these groups also tend to have restricted access to basic environmental resources and services—such as clean water, sanitation, waste management—and are disproportionately affected by environmental degradation.

“It is not just that the peripheral countries of the world suffer the main consequences of the climate crisis, it is the Black communities within these countries themselves that are suffering the most, and who historically have been excluded from and ignored by these debates,” Amanda points out.

“Generally, settlements on the urban periphery tend to form in areas such as steep hillsides or on land close to rivers, and it’s in precisely such areas that extreme weather events hit the worst,” explains Marcos Buckeridge, a biologist and professor at the University of São Paulo, and coordinator of the university’s Global Cities program. On hillsides, the risks are aggravated by deforestation, while areas close to riverbeds are at risk of flooding. 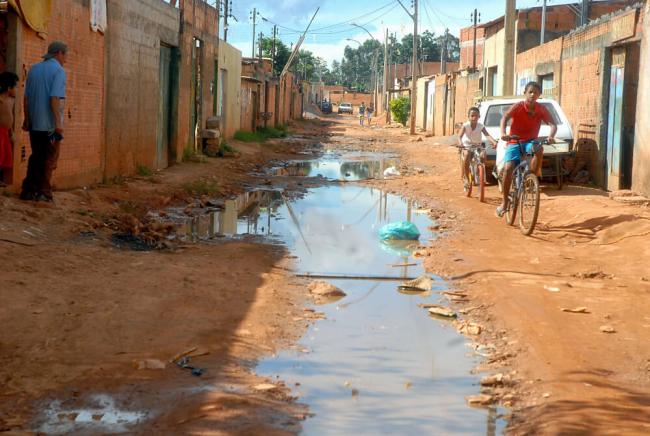 In addition, according to Buckeridge, average temperatures, which are generally higher in urban areas, are even hotter in poorer areas because of the lack of vegetation.

Seeing all of this happen around where she lives, in 2019 Amanda helped to found the Instituto Perifa Sustentável (Sustainable Periphery Institute), whose goal is to mobilize young people from Brazil’s urban peripheries and empower them to come up with solutions to the environmental and climatic problems they face in their communities.

Amanda is adamant that the way to decolonize debates around climate change is by diversifying the voices contributing to such debates. This not only means valuing different knowledge systems and worldviews beyond Western ones but also centering these voices and putting them into positions of effective participation and decision-making.

“How can I build something sustainable for people living on the urban periphery if I don’t know how these people live, if I haven’t grown up on the periphery, if I don’t know what the challenges are that these places face, or what the difficulties and problems are of living in a peripheral environment?” she asks.

Karina Penha, a biologist from the state of Maranhão in the north of Brazil, shares similar views. Karina was raised and still lives in São José de Ribamar in the metropolitan area of São Luís, the capital of Maranhão. Urbanization processes in Karina’s neighborhood remain incomplete: the streets are unpaved and the area still lacks basic sanitation.

“Before I got involved in the debates around climate justice, I often saw people who had always been marginalized feeling as though they were at fault for the climate crisis,” she says. “Such as someone who has taken the bus their entire lives, and would like to maybe one day buy a car when they have the means to do so, feeling guilty [because of the climate]. Or someone who has worked all week, without any leisure time, without even eating properly during the workday, getting to the weekend and fancying doing a barbeque, but feels guilty for eating meat.” 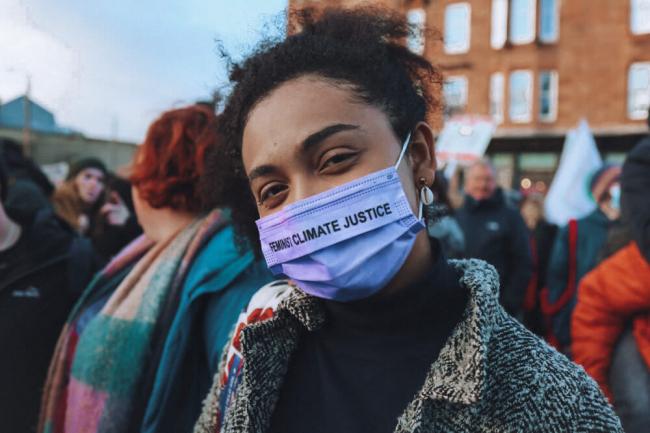 For Karina, these experiences under the need for climate justice. “Climate justice isn’t about following a ‘correct’ way of doing things,” she says, “it’s about engaging with communities and understanding their way of life and then starting to make demands of those who are truly to blame for the state we are in, which is the government, the industries and the system.”

“When we start to talk about inequalities, about who is impacted the most, you start to see a clear picture. You start to see yourself in it all and think: wait a minute, I’m affected by these things, as are others who come from the urban peripheries,” Karina says.

The act of transforming climate activism—and in turn being transformed by it—is not something that has been easy for young people who live in Brazil’s urban peripheries. “It’s almost like it’s a movement about finding yourself, recognizing yourself and your reality in the environmental issues you talk about, and finding your voice as an activist in doing so,” says Ana Rosa Cyrus, 25.

Ana Rosa has worked as the executive director of Engajamundo since 2021. Her involvement in environmental activism, however, started when she was 19, when she got involved in the Environmental Youth Collective in Belém, the capital city of the state of Pará in northern Brazil. 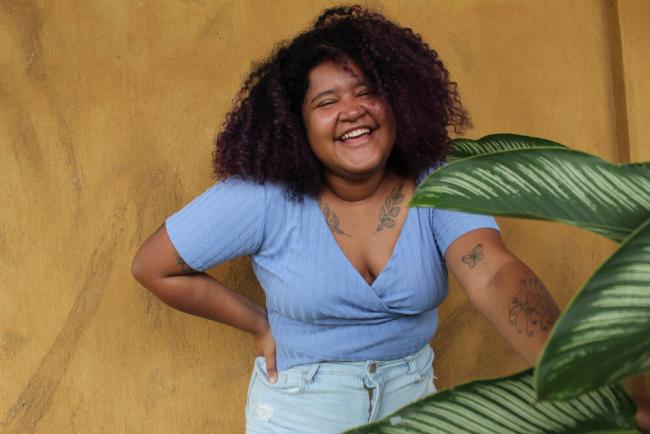 She says that “to be an activist from the periphery you need to have courage and not be afraid to confront people,” because you need to stand up for yourself all the time and make yourself heard in spaces that are still mostly occupied by white people. “If your body is different and you come from somewhere that might confound expectations, you’re not part of that world and you’re not part of their agenda.”

Ana Rosa has always lived with her family in the suburb of Icoaraci, 20 kilometers from the center of the Pará state capital. The effects of climate change have also been felt there, with last winter—which, in the Amazon, runs from November to May—seeing unusually high rainfall.

“More than on a macro scale of analysis, or talking about changes in the climate more abstractly, you feel the effects in a much more personal way, like ‘what am I feeling, how is this affecting my body and others around me?’”, Ana Rosa says.

Because of this, Ana Rosa finds talking about climate adaptation strategies pointless if these conversations do not take into account the contours of race, class and gender that shape the needs of those who live in the urban periphery. “At the end of the day, who can live in houses with roof gardens or drive electric cars? Certainly not people from the periphery. That’s for other more privileged subjects with greater access to such luxuries,” she argues. “If we don’t look at the situation critically and just think about it on a structural level, then we will go on perpetuating [the inequalities].”

Including the peripheries in the process of building sustainable cities that are resilient to climactic changes does not just mean listening to their demands, but also valuing the wealth of answers that already exist there. “The favela is a school. All you have to do is look around, get involved and get invested, and the answers will come popping up,” says social entrepreneur Raull Santiago, 33, a resident of the Complexo do Alemão, a neighborhood in the north of Rio de Janeiro. 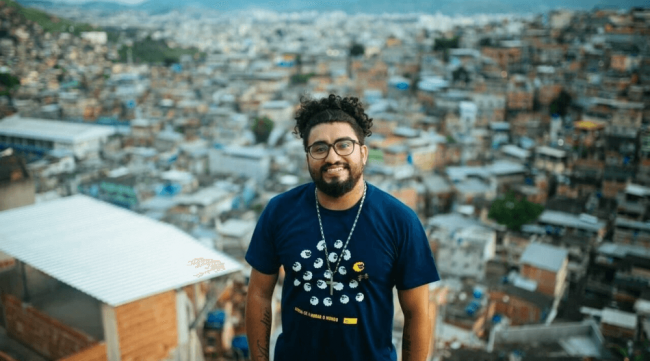 With a long history of human rights activism and championing the causes of favela dwellers, Raull launched the Favela & Sustainable Development Goals project in 2020. The project “looks at the climate and environmental crisis from the perspective of the favela,” he explains.

Raull believes in the intrinsic potential of these communities to adapt to climate change. “The favelas and the urban peripheries are already doing things differently, they embody resilience in the face of absurd circumstances, and they do it on their own, independently,” he reflects. “There are a number of projects that recycle oil and plastics, carry out reforestation, communal cleaning initiatives to prevent drains from blocking, and self-monitoring of [the condition of] hillsides.”

He has also helped to found PerifaConnection, who he represented at COP-26 in Glasgow last year. One of the central pillars of the organization is the LABClima program, which seeks to educate and train community leaders and spokespeople from the peripheries on environment issues.

Through collective action, the project hopes to provide a meeting point for exchange between scientific knowledge and the lived experience and first-hand knowledge about climate change of people from the periphery, as well as facilitate access to the decision-making spaces with regard to the climate agenda.

The report is part of the Emergência Climática (Climate Emergency) series of special reports, which investigates the socioenvironmental violations that result from carbon-emitting activities—ranging from cattle raising to the production of energy. Full coverage can be found on the project’s website.

*Matheus Santino collaborated with this report.

Anna Beatriz Anjos is an investigative reporter who covers the impacts of the climate crisis and socioenvironmental crises. She has worked as a reporter with Agência Pública since 2016.