“The Major Challenge to Brazilian Democracy Today Is Bolsonarismo”

In the wake of the attack on Brasília, both the Lula administration and civil society have a major role to play in combatting the forces propelling Brazil’s far right. 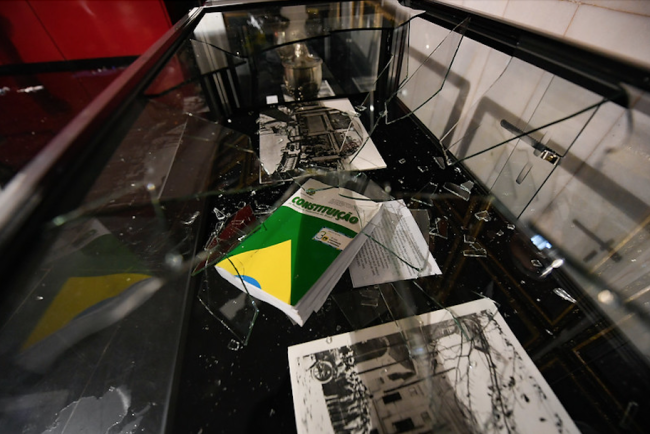 It was Brazil’s January 6 moment. And like in Washington, DC, members of security forces were complicit in the invasion, allowing the protesters to quickly break through their lines and ransack the congressional building, the Supreme Court, and the presidential palace.

President Luiz Inácio Lula da Silva responded quickly, declaring a federal intervention into Brasília’s police force, which removed protesters from the buildings. Supreme Court Justice Alexandre de Moraes ordered that all pro-Bolsonaro encampments be disbanded within 24 hours. The former president’s supporters had been rallying outside of military barracks, calling for the armed forces to intervene and install Bolsonaro as the president.

Both the Supreme Court and the Senate have launched investigations into the organizers and funders of the invasion. Nearly 1,500 people have now been arrested, including Bolsonaro’s former Minister of Justice, Anderson Torres, who was in charge of security in Brasília in the week leading up to the invasion. Brasília governor Ibaneis Rocha has been suspended for three months.

Leaders across the political spectrum have denounced the invasion and rallied behind Lula. That includes even adamant Bolsonaro allies, like the head of the lower house, Arthur Lira, and department store billionaire Luciano Hang.

One week after the attack, Lula seems to have a renewed a popular mandate. And Bolsonaro is more isolated than ever. The former president left for Florida two days before Lula’s inauguration. His online support is at an all-time low. Ninety three percent of Brazilians condemn the capital attack.

To help get a sense of what comes next, I spoke with João Feres Júnior over WhatsApp one week after the Brasilia attack. Feres Júnior is a professor of Political Science at the Rio de Janeiro State University (UERJ) and the coordinator of the Manchetometro, a media watch-dog group, produced by the UERJ’s Media and Public Sphere Studies Laboratory. Beyond prosecuting insurrectionists and their financial backers, he says, tackling fake news will be key in combatting Bolsonarismo.

Michael Fox: João, where does Bolsonaro and Bolsonarismo stand after the January 8 Brasília invasion?

João Feres Júnior: I think that Bolsonaro and Bolsonarismo stand in a much worse situation after the events of January 8. At the end of the day, most of the political forces and institutions in Brazil sided with Lula and with the defense of democracy. So Lula was able to champion that much more effectively than he was during the campaign. Only a very few radicalized people supported the events. And even after the events, these people weren’t very vocal, because they were afraid of being prosecuted for manifesting opinions that were supportive of a military coup or of ousting a democratically elected government. So I think that in the end, Lula got the best of it, despite all the damage that was done to the buildings.

JFJ: Yes, Bolsonaro supporters wanted the military to intervene. They wanted to trigger the intervention through their actions. I think that was the general plan: they go there, invade, destroy, and then the military intervenes to reestablish civil order and in the process of doing that it would cancel or oust the elected Lula government.

That was the general plan.

The military did not do that, and that frustrated these people who were protesting and who attacked the buildings. And they were also frustrated because many of them were arrested. They were treated as common prisoners. Several of them are still in jail.

That includes the security forces under the control of the administration of the Federal District, which works like an independent state in Brazil, and also special security groups that are in charge of the security of the presidential palace and intelligence agencies and even the army.

So there are two things: there is this discontent with the military among the ones who staged the coup, but there is also the military misbehaving in relation to the new government, and that has created a crisis. And I hope this crisis is solved quickly, so Lula can go back to governing the country.

MF: What do u expect for the coming months? And how much has Lula actually benefited from the January 8 invasion?

JFJ: Well, it will depend on what happens in the near future. There is no option except for Lula to repress this movement and to prosecute the ones who invaded and who financed the invasion and the destruction. I think these guys should be punished as an example for other people who might entertain the idea of doing something similar in the future.

MF: The elephant in the room, João, is how much fake news and false information have been used to spur people into action and turn them out in Brasília. And these same lies and misinformation continue to ramp up following the invasion, spreading false information that some people who participated in the attacks on Brasília have died in detention, or stating that the country is now a communist dictatorship. What does the future look like for fake news, social media, and media in Brazil?

JFJ: This is a complicated issue that has to be faced by Lula and Brazilian democracy as a whole.

I was already thinking about this before the January 8 terrorist attack on the federal building. Lula has this huge task of dismounting the whole communicative sphere created by Bolsonaro. And it's not the responsibility of Lula alone. Ultimately, it’s the democratic institutions of Brazil and also democratic Brazil, the organized civil society and institutions that are not public.

Because, if the matter is to defend democracy, the major challenge to Brazilian democracy today is Bolsonarismo or Bolsonarism. And Bolsonarism is based on communication. That's the best way to think about this. That’s the structure. And it's a complex type of communicated sphere because it has at least three pillars.

The first is what they’ve called the "Cabinet of Hate" and was based in the presidential palace. It was under the control of Bolsonaro's son Carlos. And it was a network for producing and circulating false information and hate speech.

Some of its operations were uncovered by the congressional investigative committees that focused on the management of the pandemic. There was also a special commission to investigate fake news in Brazil.

These guys uncovered a lot of information about how this "Hate Cabinet" worked. And it was partly financed by private donors. In other words, businessmen who support Bolsonaro and have interests aligned with the Bolsonaro government. A lot of these people are connected to agribusiness and the illegal trafficking of wood from the Amazon, deforestation, and other activities.

So part of this Cabinet of Hate was supported by these guys, but a lot of the people who were actually producing content—the creators of content for the cabinet—were employed by the executive branch and by Bolsonaro. They were working for him. Working to sustain…continuous campaigns of creating narratives, most of them very delusional in favor of Bolsonaro.

That's one of the pillars. The other pillar is the traditional media, the media companies that supported Bolsonaro. For example, Record TV. That's a TV station, I think it’s the second most popular in Brazil and it belongs to the evangelical church, the Universal Church of the Kingdom of God. Record TV was openly supportive [of Bolsonaro], and they have an open signal, so it's broadcast to the whole country.

You also had SBT and other television channels. You also had Jovem Pan, which is a cable news channel, and also a network of radio stations. So there were several traditional media operations that decisively supported Bolsonaro.

And the third pillar are the evangelical churches that actually use the pulpit to work for Bolsonaro, to campaign, and also to divulge the alternative versions of facts that the Cabinet of Hate produces. This is a lot of the content that circulates in these areas.

I think that Lula should really focus on dismantling this whole operation. Of course, by being in government and firing most of the people who are working for Bolsonaro is already a blow against the Cabinet of Hate. But then you have to deal with the private donors who are supporting it through illegal money. And you have to deal with the traditional media operations and media companies, and also the evangelical churches.

Part of the task is a political negotiation and part of it is submitting these activities to legal standards. So, prosecuting people who are doing illegal stuff. I think this task should be led by Lula, but not exclusively be carried out by him, because the judicial branch suffered under Bolsonaro, and it has suffered with this attempted coup. And the legislative branch has too.

The branches of government need to unite in this campaign to save Brazilian democracy. Not only that, but organized civil society should also do its part.

Michael Fox is a Latin America-based multimedia journalist and host of the podcast Brazil on Fire. He was previously editor of NACLA. He tweets at @mfox_us.