Opposition lawmakers in Brazil voted in favor of charging the president with crimes against humanity for downplaying and mishandling the pandemic. 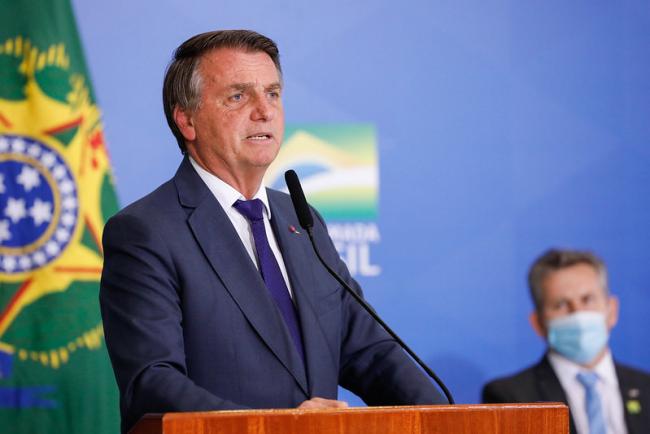 Since the pandemic started, one in 10 people living in Brazil has contracted COVID-19, and more than 600,000 deaths have been reported. Despite these staggering numbers, Jair Bolsonaro, the president of Brazil, has consistently downplayed the threat of the pandemic. The Brazilian Senate has had enough.

On October 26, seven out of the 11 members in a Senate committee voted in favor of recommending nine charges against the Brazilian president. Over the last six months, a Brazilian Senate Parliamentary Inquiry Committee composed of 11 Senators investigated the federal government’s management of the pandemic. On October 20, Senator Renan Calheiros published a nearly 1,200-page report asking the Senate to investigate Bolsonaro on several charges. One of the recommendations in the report was to prosecute Bolsonaro for “crimes against humanity.” That proposal is controversial, but using this term in the report is an attempt to expand the definition of crimes against humanity to keep Bolsonaro responsible for his mishandling of the pandemic.

Bolsonaro’s critics have an uphill battle in their quest to charge him for crimes during the pandemic. Although the October 26 vote was an important achievement, the next round will be more complicated. Brazil’s prosecutor-general, appointed by the president, will decide if he will file the charges. But, even if Bolsonaro’s critics lose this legal dispute, they might win terrain in the political fight over support and votes.

The authors of the Senate report carefully chose the terms included in their accusations. They considered accusing Bolsonaro of more inflammatory charges, such as homicide and genocide against Indigenous groups. On October 19, they decided to drop these accusations but kept the crimes against humanity charge, arguing that the Brazilian president’s actions have left the country unprepared and unprotected against the pandemic. Many reports show how Bolsonaro ignored public health experts: he advocated for herd immunity long after specialists advised against it, promoted dubious cures such as hydroxychloroquine, and held massive public events defying the guidelines of his own government. But while analysts might agree on describing his policies as irresponsible and incompetent, some disagree on whether Bolsonaro’s actions are crimes against humanity.

The leading international document defining the term crimes against humanity is the Rome Statute of the International Criminal Court. This document is the product of complex international negotiations and presents a consensual definition of four core international crimes that the ICC can investigate and prosecute if states are unable or unwilling to do so themselves. The Rome Statute defines crimes against humanity as acts “committed as part of a widespread or systematic attack directed against any civilian population, with knowledge of the attack.”

As the Senate reviews the case, some Brazilians informally debate whether the report by the Senate Committee is using the term crimes against humanity correctly or not. For some, Bolsonaro downplayed the risks of the pandemic and promoted dubious medical responses out of ignorance. For others, Bolsonaro acted with knowledge of the consequences of his actions, regardless of how it impacted Brazilian citizens. Definitional debates notwithstanding, the report’s authors are looking for additional resources, even conceptual ones, to strengthen their demand for accountability.

Among Bolsonaro’s opposition, the report provides fuel for mobilizing discontents, further reducing the president’s popularity. Since the pandemic started, Bolsonaro’s approval ratings have been falling steadily. According to polling firm Datafolha, Bolsonaro’s approval rating in April 2020 was 33 percent. It has since fallen to 22 percent, demonstrating how all Brazilians have been affected by Bolsonaro’s mishandling of the pandemic, whether directly, experiencing COVID-related deaths and infections, or indirectly due to rising unemployment, interests, and prices.

The opposition will likely use this report to mobilize discontents and vote Bolsonaro out of office in the October 2022 presidential elections. However, Bolsonaro’s approval could increase if the situation in the country improves and he manages to make Brazilians forget about his mishandling of the pandemic. In the meantime, the opposition in Congress is trying to keep momentum and is considering using the report to trigger an impeachment process, even if the possibilities of impeachment are slim. For this first step, the Senate Committee writing the report was divided, and most of the controversial charges had to be taken out in order to secure enough votes to approve the report.

The opposition will face an even more complex situation in the lower house of the Brazilian Congress if they plan to use the report to trigger an impeachment process. Arthur Lira, the head of the lower house of Congress, would have to support this process, and he is close to Bolsonaro. In February, Lira became the speaker of the house, gaining overwhelming support from congressmembers against his rival, who advocated independence from the Bolsonaro administration. Despite the tough odds, Bolsonaro’s critics are betting on the checks and balances system in the short term and on the memory of the Brazilian electorate in 2022.

The Congressional panel has a domestic audience in mind, but the opposition is considering generating international attention as another strategy. One of the report’s authors, Renan Calheiros, has suggested asking the International Criminal Court to analyze the accusations against Bolsonaro for crimes against humanity. In 2012, Brazilian diplomats actively participated in the definition of crimes against humanity and accountability after the humanitarian intervention in Libya, which followed the Responsibility to Protect guidelines. If they succeed in bringing this issue to the international stage, Brazil could once again be at the forefront of determining humanitarian law.

The term crimes against humanity is vague on purpose. The writers of the Rome Statute drafted a definition in 1998 that could include future assaults on civilian populations that they could not foresee. To expand the definition of crimes against humanity with this case, the authors of the report need to convince the ICC that misconduct and negligence are or should be comparable to acts typically associated with war and repression. Then they must prove that Bolsonaro acted with knowledge and intent and was not just mistaken or inept when dealing with the pandemic. If the Brazilian Senate refers the case to the ICC, as Calheiros proposed, this will be the first time the Court debates whether a leader who deliberately mishandled a public health crisis can face criminal consequences.

The Brazilian Senate Parliamentary Inquiry Committee argues that Bolsonaro downplayed the seriousness of the pandemic, organized large gatherings, and disparaged scientists. They have recommended prosecuting the Brazilian president and current and former members of his administration, including his three eldest sons. Bolsonaro has replied dismissively, arguing that “we know we did the right thing from the first moment.” Following a script common among policymakers around the world who have dismissed Covid-19, he also accused his critics of organizing a politically motivated witch hunt and joke.

Even if the possibilities for impeachment or an ICC trial are slim, accusing Bolsonaro of crimes against humanity might trigger dynamics rendering him closer to being held accountable. The Brazilian example could also set a precedent for pursuing justice for negligence and mismanagement around the world.

J. Luis Rodriguez is a Stanton Nuclear Security Postdoctoral Fellow at Stanford University’s Center for International Security and Cooperation. He is a specialist on Latin American contributions to limiting the use of force through international law.