No One is Safe in Bukele’s Gang War

With tens of thousands jailed and scores of reports of human rights abuses, Nayib Bukele’s project slides ever closer to a permanent state of exception. 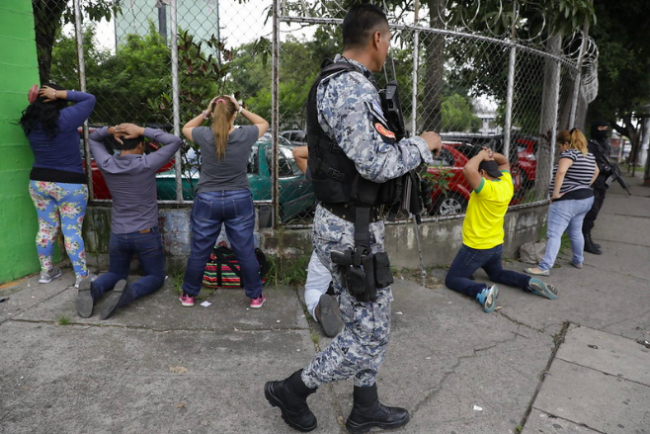 Now in its third month, El Salvador’s state of exception rolls on with no end in sight. The protracted emergency, which has thrown all constitutional guarantees aside, began after the gangs—MS-13 and Barrio 18—unleashed a homicide wave at the end of March that left 87 people dead in the quick span of 72 hours. The government responded with a forceful crackdown that has since detained more than 40,000 Salvadorans, the vast majority of whom have little to do with gang activity. According to the human rights group Cristosal, at least 18 people have been killed in custody.

The scale and spectacle of the March homicides revealed that President Bukele’s security measures, his Territorial Control Plan (PCT), was largely comprised of backdoor dealings with gangs. Indeed, El Faro confirmed the killing spree was the result of a breakdown in the government’s negotiations with MS-13. Consequently, the episode reactivated a longstanding Salvadoran polemic around human rights, sowing confusion by exploiting the gang menace to obscure the irreparable harm levied against thousands of Salvadoran families caught in the anti-mara dragnet.

The homicide spike prompted Bukele’s government to mete out a swift response. The state deployed police and military across El Salvador, strategically stationing patrols across the poorest neighborhoods like Soyapango, Mejicanos, San Martín, San Marcos, Santa Rita—places today stigmatized by their gang presence. During Bukele’s mass gang sweep, the government began rounding people up indiscriminately—men, women, children—all suspected of being gang members or of being “affiliated” with gangs. Bukele’s security policies have now become at once random and comprehensive, employing a tactic of “catch now, ask questions later.” Politically, this retaliatory logic of “getting even” has also helped to preserve the political capital lost after journalists revealed that Bukele—referred to by alias “Batman” in audio recordings between a senior official and at least one MS-13 member—was, as a key part of PCT, actively negotiating with gangs.

Accordingly, Bukele has continued to wage a propaganda war on Twitter. Recent tweets have riffed on common anti-mara sensibilities, circulating images from the military and police to display the unyielding might of his Territorial Control Plan. As many now recognize, Bukele’s opaque PCT is simply the current naming of old forms of punitive power: iron fist approaches, a state favorite to discipline the gang scourge. As the homicide spike exposed many political weaknesses, Bukele scrambled to restore integrity to his security efforts and to ignore reports of internal dealings. This security strategy—intensified militarization alongside secret negotiations—has brought some of the longest stretches of zero reported homicides in the country since the end of the Salvadoran Civil War.

The state and the gangs are both fickle, and security policy is a fragile endeavor. The homicide spike was not some senseless act nor an irregularity: it was a direct message to Bukele’s government, expressing with corpses the gangs’ dissatisfaction with the breakdown of negotiations. As part of the deal, the state and gangs traded homicide reductions for improved prison and street-level conditions. While the revelation that Bukele’s government was transacting with gangs was generally unsurprising to Salvadorans, it did make the public recall the gang truce that the FMLN government of President Mauricio Funes secretly negotiated in 2012. Similarly, homicides shot up again after the truce collapsed, and the controversial negotiations damaged the FMLN’s reputation.

Salvadoran gang command is known to work through the prison system, where leaders of la ranfla nacional or national directorate broadcast orders from within. On the outside, gang cliques—street-level cells—penetrate every hamlet and neighborhood, where their presence is an ordinary part of everyday life. In these desperate worlds of the poor, gangs continue to offer opportunities as well as forcefully recruit the most vulnerable of the Salvadoran underclasses to join their ranks. Socially and politically, the gang has become a flexible signifier and dog whistle that now represents all the country’s dysfunction. Their mistreatment—discursively and otherwise—continues to offer astonishing political currency and has turned it into a criteria for sorting the poor, between deserving and undeserving. Ideologically, Salvadoran politics continues to publicly wear its tough-on-crime guise, despite that pragmatically, negotiating with gangs is a political necessity.

The outsized footprint of gangs has transformed them into local mediators for accomplishing anything politically. Municipal leaders, town mayors, and local chapters of political parties must, in many cases, interface with local gang leadership to serve their terms peacefully. For Salvadoran politics in general, this has precipitated a host of bipolar policies at all levels: performing the spectacle of policing as a response to unending moral panic, while continuing to secretly deal with gang leadership. This approach, coupled with political short-termism, has led to the criminalization and stigmatization of entire sectors of the Salvadoran population. Poor and working-class areas—from Apopa to Sesuntepeque, Ciudad Delgado to Cojutepeque—are now zones of abandonment: unsafe, “gang-infested” communities stigmatized for their economic poverty and their related social disorder. Marginalized rural hamlets, those cantoncitos near and far, are also commonly cast as anthills of gang activity.

As watchdog organizations like Cristosal remind us, the state of exception is a human rights emergency. The Bukele government has deployed a blunt instrument to address a delicate, socially intricate, and embedded political economic problem. Sharpened through practice, the criminal profiling of gang members has transformed into an indiscriminate criminalization of the poor. And human rights defenders who seek the protection of constitutional guarantees for all have been slandered as protecting the maras, as siding with terrorists.

Bukele, disregarding all naysaying to his approach, has used the state of exception to suspend citizen rights of free assembly and due process while continuing to capture anyone tangentially linked to gangs. Relying on this terribly imprecise metric, Bukele’s government has now arrested thousands, using these very numbers to celebrate the successes of their operation and justify the construction of a new “gigantic penitentiary” to support the PCT. State communiques defend the accuracy of their targeting, communicating that drug dealers, extortionists, gang members, and abusers are among the captured, now off the streets and rotting in prison. Fundamentally, the gang crackdown has violated citizen rights and constitutional guarantees, trashed habeas corpus, and pointlessly harmed the innocently detained. Bukele’s state of exception has produced the very emergency it aims to resolve, relying on the deep-seated punitive culture that has made every Salvadoran a suspect.

Fear remains a prime mover in Salvadoran society and politics where suspicion has always been a favored vehicle to articulate security policy. In the Salvadoran Civil War, for example, poor people were often “suspected” of being affiliated with the guerrilla movement, and their poverty equated them with being, if not militants themselves, rebel collaborators. On the other hand, clandestine groups were suspicious of the Salvadoran state, as they were known for placing undercover agents in their midst, and many members were found to be cops or soldiers. These forms of suspicion have left a lasting imprint on Salvadoran society, becoming a kind of political emotion that has made the poor indistinguishable from the criminal. Arbitrary detention, capture, kidnapping, and execution were common wartime acts that have since continued, now mutated into present-day practices of disappearance, mass jailing, intentional homicide, and punitive spectacle.

As the “gang problem” swelled over the last 20 years, certain physical traits became linked with gang affiliation. These characteristics congealed into a criminal type—a young, poor, able-bodied Salvadoran man—meriting the utmost suspicion. Across administrations, male bodies marked by tattoos, piercings, and certain clothing styles became commonsense shorthand to the state and the public. Criminal profiling—strategies derived from U.S. urban policing practices—fused with local security and surveillance practices, becoming indispensable to Salvadoran statecraft. Beginning under the government of Francisco Flores with the first zero-tolerance mano dura policy in the early 2000s—and continuing under the administrations of Tony Saca, the left interlude with Funes and Salvador Sánchez Cerén, and now Bukele—poverty became a criminalized terrain where people, whether young men, women, or even children, have become the collateral damage of anti-mara operations.

Bukele continues touting that there have been zero homicides in the country since he decreed the state of exception. He continues to discursively split the Salvadoran public between the good and the morally derelict, for whom el presidente holds no compassion. While some of the captured have since been released, families of the newly detained are waiting outside the decrepit Mariona and Izalco prisons, wondering about the welfare of their interned loved ones. Packed tightly in dungeon-like cells, the captured are undergoing ghastly experiences, their day-to-day shattered by Bukele’s emergency. These people remain without due process, among them those who likely once thought themselves among the righteous supporters of the politics against the wicked. In mid-2022, Bukele’s state of exception has become an instrument for everyday rule, where a routine ID check that reveals you’re from the wrong neighborhood might be enough to prompt arrest, detention, and express sentencing.

Over 3,000 complaints about human rights abuses have been filed with the country’s Human Rights Ombudsman since the start of the emergency period on March 27. Families—mothers, friends, wives, daughters—have recently gathered at the capital’s Salvador del Mundo Plaza to express their dissatisfaction with Bukele’s treatment of their relatives. Nighttime vigils have sought to convince President Bukele to reconsider the extended emergency—recently renewed until late July—and to free their loved ones who have been arbitrarily stripped of liberty. Quoting scripture and offering collective prayer, these now-illegal gatherings are aimed at appealing to Bukele’s morality, requesting divine intervention to secure the speedy return of the captured. Some have even expressed a sense of betrayal with Bukele, underscoring that although they may have voted for him, they did not consent to this abuse of power.

The Bukele project is moving towards a permanent state of emergency, where Salvadorans must accept the arbitrary dictates of a strongman state aimed at the gangster-terrorist and its associates. To the directly affected, the arbitrary detentions have provided a type of political clarity that is only gained via first-hand experience. For the unaffected and fortunate others, Bukele, by never yielding to terrorist intimidation, has once again proved his political effectiveness in controlling the gangs. Both groups, however, are working from their own, situated, cost-benefit analysis of the country’s reality. There are even reports of people singling out their neighbors to police, inflaming community-level antagonisms and familial disputes. Others applaud the temporary end of extortion payments and the sensation of safety brought about by emergency measures. In this knotted social field where safety is never taken for granted, the curbing of civil liberties for utilitarian benefit remains acceptable to many. For others, even a single abuse of human rights is a direct attack on the civil liberties of all, moving the country ever closer to authoritarianism.

Jorge Cuéllar is an interdisciplinary scholar focused on Central America and its diasporas. He is Assistant Professor of Latin American, Latino & Caribbean Studies at Dartmouth College.