Caribeños at the Table (Review)

For Caribbean immigrants in New York City, dynamics of race, class, and gender significantly impact both food practices and health. 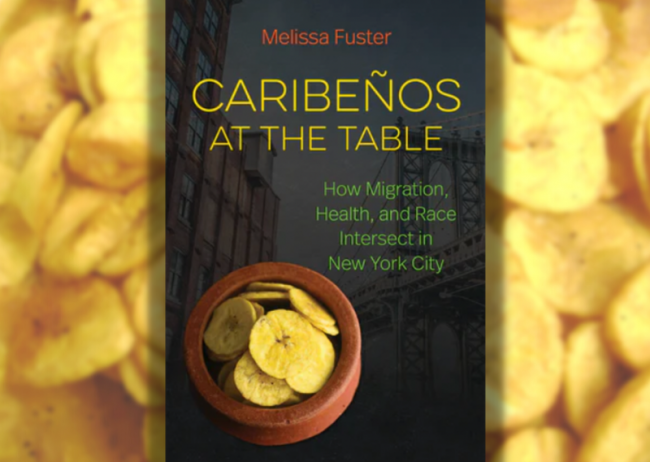 Growing up in Jamaica, food played a central role in my life and culture. My mother had a small restaurant uptown where she proudly served our most treasured dishes such as ackee and saltfish, curried goat, and oxtail, to tourists and locals alike. Our meals at home were usually Jamaican staples, but my mother also made typical 1970s U.S.-American dishes such as Shake ‘n Bake chicken and macaroni and tuna Salad. While we thoroughly enjoyed our heritage cooking, U.S. products and imports were considered a luxury, and a marker of social class. I remember feeling super cool when I brought a tuna fish sandwich with Pringles and a can of fruit cocktail to school for lunch.

Several years later, when we moved to Miami, our typical Jamaican diet quickly evolved into a hybridized Jamaican American cuisine. Curried goat was replaced with pork chops, and our traditional side dish of rice and peas took a backseat to mashed potatoes with sour cream and butter. Over the next decade my mother’s health deteriorated significantly.  A single mom to 3 children, she worked around the clock as a nurse’s aide to provide for us. Home cooked meals became a rarity. She died from cancer at the age of 61.

While reading Melissa Fuster’s Caribeños at the Table, I made a profound, personal connection to the stories that explored the relationship between food, migration, race, and health. Although my family is Caribbean, and not Caribeño, our story is like many of those discussed in Fuster’s book. Collectively, Black and Latino Caribbean immigrants are more likely to be diagnosed with hypertension, diabetes, and obesity. Many blame it on unhealthy traditional food habits as opposed to culturally and structurally positioned food choices. In this recent work, Fuster intricately unpacks the stories of Caribeños in New York City and complicates the often linear and romanticized perceptions of their dietary changes and associated health impacts. Her main argument is that Caribeño food practices are more significantly impacted by class, race, and gender than by culture.

Throughout the book, the author deftly demonstrates that a global shift towards Americanized food has shaped the food practices of Caribeños, not just upon migration, but also before they arrive. Fuster disrupts the discourse of migrants’ “universal longing for traditional foods” by arguing that dietary practices are significantly influenced not just by culture; but more importantly, by intersectional structural factors such as class, race, and gender, both in their homeland and their new home.

In the introduction, Fuster writes that “food discourses serve to ‘construct and reproduce what nations are, not only in terms of produce and dishes, but also in terms of images, traditions, scenes, people, and geography.’” Within this context, Fuster eloquently narrates stories of Latin American culinary traditions, techniques, and culture that make up the “comidas,” a complex Spanish term that encompasses multiple ways of eating, from snacks to celebratory events and all the bites in between. Fuster uses these stories of comidas, prepared and shared, to illustrate the complex cultural role of food and consumption in the process of acculturation.

The first chapter, a historical review of the distinct trajectories of Cubans, Dominicans, and Puerto Ricans who migrate from the Hispanic Caribbean to the United States, sets the table, so to speak, with a robust discussion of the tri-partite racial politics in Latin America. Increasingly visible in cities such as Miami and New York, tri-partite racial categories usually consist of Black, white, and a wide swath of in-between, sometimes called honorary white, mestizo, or white adjacent. Among Caribeños, food practices serve as a form of demarcation and positioning within this diverse Caribbean-Hispanic community. Using New York City as a lens, the opening chapter unpacks the distinct racialized histories of Cubans, Dominicans, and Puerto Ricans, who are all considered Caribeños. This chapter illustrates the connection between the racialized experiences of the past, food practices and consumption, and the socioeconomic and health conditions of Caribeño communities today.

In the chapter “Culture as Cause and Solution,” the problematized perspectives of nutrition experts and practioners who are hyper focused on culture as the cause of negative food-related health outcomes in Caribeño communities are brought into focus. Fuster calls out the ethnocentric, linear focus of dieticians who often consider Latin American cooking practices to be inferior and lacking in nutrition. She contrasts Caribeño consumption practices that nutrition practioners attributed to negative cultural traditions—such as large portion sizes, high consumption of starches and fats, and an over-attachment to traditional foods and cooking methods—with similar poor eating patterns in working class U.S. cities. In a salient moment in this chapter, Fuster debunks descriptions of Dominican restaurants as part of “an ‘obesogenic environment,’” stating that “food habits are shaped by benefit systems, low wage jobs, access to food…and the home environment.” She reinforces this message with stories and narratives that clearly demonstrate that the connection between poverty, obesity, and diet-related health conditions is universal, and not unique to Latino communities.

The next chapter, “Caribeños talk about Comidas in Nutri-Speak,” returns the focus to the racialized experiences of Caribeños. Fuster interrogates shifting cultural linguistics within which Caribeños often use “Nutri-speak,” a linguistic code that signals the connections between food, race, and class. They use terms such as “carbs,” “starchy,” and “fatty,” to parrot culinary discourse constructed through the frameworks of good and appropriate nutrition. This coded language is used to signal distance or closeness to their cuisine effectively constructing culinary hierarchies within Hispanic-Caribbean cuisines. Anecdotes such as the story about a Latina girl being othered in school because of what she brought for lunch reinforced Fuster’s argument that Caribeño’s perception of heritage foods largely depends on “migration histories and existing connections” with their country of origin.

This book was especially engaging because of the author’s personal story of migration juxtaposed against her coming-of-age food journey. For her, US culinary influences created a Puerto Rican childhood preference for Kraft macaroni and cheese. Growing up on the island, she ate a mixture of traditional foods along with US fast food in the local plazas. After her migration to Miami, she began to experience the comidas of other Latin Americans through the lens of race and class and started to feel like an outsider. This experience awakened her desire to (re)claim her traditional Puerto Rican foods in what seems to be an act of resistance.

In the final chapter, Fuster shared her story about learning to make pasteles, “the quintessential Puerto Rican savory Christmas dish.” The thick description of her experience preparing this complex dish of banana leaf-wrapped, polenta-filled pillows with stewed pork, garbanzo beans, and olives was deliciously riveting and served to illustrate the complex, shifting relationship Caribeños have with food. It was ironic that she was first learning to prepare this iconic Puerto Rican dish in a New York apartment, in the middle of winter, over a thousand miles away from the tropical shores of Puerto Rico.

Caribeños and other migrants, often recreate dishes and foodways from their homeland as a form of “gastronomic nostalgia,” where their dreams of home are supplanted with heritage foods in an effort to recreate traditions that evoke feelings of belonging. While Fuster acknowledges that she herself has engaged in gastronomic nostalgia, particularly after her move to New York, she also contends that the experience is not universal for all Caribeños. She finds that some immigrants may not ever experience gastronomic nostalgia, or may partially do so in times and spaces, due to diverse social and personal circumstances that are correlated to race, gender, and class. Fuster concludes this chapter by reminding us that “dietary change is an intrinsic part of personal evolution and growth regardless of the place of origin.” She cautions us to remember that “change is not unidirectional, and while we may be tempted to forego traditional comidas for new, exotic foods, life can always steer us back ‘home’ through our plates,” as it did for her.

Many of the concepts discussed in this book could be applied to other Caribbean and Latin American countries that have experienced large waves of migration to the United States and are disproportionately experiencing chronic diet related health issues. Fuster’s work disrupts hegemonic, ethnocentric, discourses that use food and cultural eating practices to other and stigmatize Caribeños, and historically marginalized immigrant groups, by positioning their cultural food preferences as unhealthy, and inferior. Her work presents a novel approach to the problem by analyzing the extent to which structural impacts, in tandem with a globalized preference for American foods, have shifted Caribeño diets and their related health outcomes. This book offers a new lens through which practioners can become culturally competent. It would be of great use to anyone studying and working with diet-related health outcomes in migrant communities, particularly undergraduate students studying nutrition, public health, political science, social sciences, and immigration.

Judith Williams is an Assistant Professor in the Anthropology of Race and Ethnicity at Furman University. Her current research explores the impact of structural inequalities on Black female restaurant workers who work in fine dining restaurants in the U.S. South.