A Century of Brazilian Documentary Film: From Nationalism to Protest (Review)

Darlene J. Sadlier’s monumental history of feature and short documentary film documents Brazil’s unique contribution to the genre while mapping a biography of the nation. 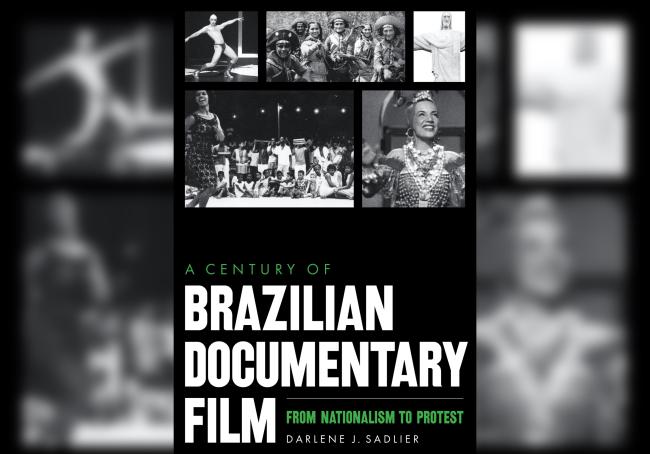 In February 2018, the Panorama Dokumenta at the 68th edition of the Berlinale, or the Berlin International Film Festival, showcased 20 features. Three were made by Brazilian directors and center Brazil through their subject matter or the regional landscapes portrayed: Ex Pajé (Ex Shaman, Luiz Bolognesi), Bixa Travesty (Tranny Fag, Claudia Priscilla and Kiko Goifman), and O Processo (The Trial, Maria Augusta Ramos). A fourth, Zentralflughafen THF (Central Airport THF, Karim Ainouz), made by a Berlin-based Brazilian director, registers the lives of asylum seekers in Tempelhof, Berlin’s former airport built by the Nazi government.

Significantly, what also materialized at the Berlinale was the diversity of voices represented in these films. The story of a holy member of Brazil’s Pater Surui tribe, the artistic and everyday life of a transgender artist and performer, Linn da Quebrada, and the impeachment trial of President Dilma Rousseff and the country’s profound political crisis, all attest to the diversity of aesthetic and narrative choices showcased. Federal programs such as DocTV (2003-2010) aimed to promote the production of independent documentaries to be exhibited on public television. Additionally, well known documentary festivals, such as É Tudo Verdade (It’s All True), federal and state funding, and a wide array of private subsidies have continued to energize and contribute to the already rich, innovative Brazilian documentary tradition developed since the 1920s.

Each of the films have a political range. The three documentaries take either a traditional distance away from its subject or establish a more clear and direct relationship with it. For O Processo, the Berlinale served as a platform for a broader global reach for director Maria Augusta Ramos, whose Trilogy of Justice had already launched her to a well-deserved spotlight in Brazil. The first feature about the political theater that ousted Rousseff, Ramos's film was within the 10 most popular of Brazil’s 2018 features released in movie theaters.

A year later, in June 2019, Netflix streamed Petra Costa’s Democracia em Vertigem (The Edge of Democracy), Brazil’s Oscar nomination for Best Documentary (2020) that chronicles the impeachment of Rousseff, the imprisonment of Luiz Inácio Lula da Silva, and the triumph of an authoritarian regime amid growing political polarization. Costa’s popularity led to a huge debate on the left and generated a considerable public polemic at the time of its release. Months later, Bárbara Paz’s Babenco - Alguém Tem Que Ouvir o Coração e Dizer: Parou (Babenco: Tell me When I Die) premiered at the 2019 Venice Film Festival, where it won Best Documentary. Although film production during the pandemic slowed down considerably, it picked up in the last year and demonstrated a global and local fervor, if not urgency, for Brazilian political topics explored through film.

Complexity and a desire to intervene in contemporary affairs are common traits in all these features, and present in the vast majority of the documentaries analyzed in Darlene J. Sadlier’s monumental A Century of Brazilian Documentary Film: From Nationalism to Protest. Organized in eight chapters and an epilogue, the volume gives an account of the different moments of development of documentary film production and its ties to the historical and political vicissitudes of each stage. The author does not construct a narrative of evolution. Rather, the text analyzes emblematic shorts and features connected organically to pressing social and political issues, oftentimes shaping the public debate.

In Chapter 1, Sadlier reveals how Brazilian documentary, since its inception, alternated between appreciative and critical notions of modernization. The emblematic title The Jungle and the City does not outline opposites, but shows how 1920s documentaries, showcasing either urban landscapes or remote regions, enthusiastically embraced ideas of progress. The 1929 São Paulo, Sinfonia de uma metropole  (Rodolfo Lustig and Adalberto Kemeny) showcases the wonderous activity of urbanization and industrial development, in tune with the many other “city symphonies” of the 1920s and Brazil’s own vibrant modernism. The documentary is not just an ode to progress, but also a political statement about the pivotal economic place the state occupies within the nation. Silvino Santos 1923 No país das Amazonas celebrates Brazil’s natural resources and wealth, placing the region as a locale of potential investment and endless development. Both films had considerable box office support, illustrating how appealing the rhetoric of progress and documentary as a form were for audiences.

Chapter 2 explores 1930s and 1940s educational, state-produced documentary shorts along with the first studio productions. It places the former as the result of President Getúlio Vargas’s cultural policies materialized in institutions that would accompany film production from that moment on (e.g. official censorship, state subsidies, etc.). From public health campaigns to the celebration of notorious national figures, these films are not treated as mere propaganda. Even if they embrace a modernization storyline, there is real artistic value. Through a detailed analysis of the mise-en-scène, or set and character design, Sadlier shows the film’s real cultural impact.

The second half of the chapter is devoted to footage about the annihilation of social bandits in the Northeast—depicting already well-known images of Lampião, a legendary outlaw, and his group—in the name of national unification and modernization promoted by the Vargas regime (1930-1945). The final pages of this section are devoted to four studio made documentaries produced by Vera Cruz, one of the first Brazilian production companies.

A significant change in the nation’s visual representation emerges in Chapter 3. Sadlier skillfully chooses two emblematic documentaries of the late 1950s, Arraial do Cabo (1959) and Aruanda (1960) to show the profound drawbacks of modernization and the evident human cost. From the portrayal of a fishing village and its complex connection with the local factory to the crafted recording of the culture and traditions of a small rural community in the Northeast, these first films were inspirational during the formative years of the Cinema Novo movement.

The chapter then delves into analysis of the documentaries that followed the 1964 military coup, and the process of radicalization of filmmakers and accompanying changes in optics and aesthetics. There is an organic connection between the shorts made by Leon Hirszman, among others, in this early moment and the narrative features that were made as the repression and censorship of the regime became more brutal.

It is in Chapter 4, “Documentary, Dictatorship, and Repression,” where the constellation of Sadlier’s arguments becomes clear. Drawing on the legacy of Caravana Farkas provides a way into appreciating this synthesis. The Caravana Farkas was a group of young filmmakers organized around the Austrian photographer and artist Thomaz Farkas, who carried out a pioneering project​​ recording Brazilian popular culture for over 15 years. The group freely used traditional reporting techniques and elements of fiction, ranging from ethnography to improvisation. Sadlier shows how the focus that had already shifted to the poor in the films analyzed in the previous chapter became a central concern during these somber years. Popular culture, working class migrants, rural workers, and women are also examined and displayed as part of the multifold oppression of the times. The connections between documentary and journalism became an incentive for production, as television was a platform to promote these stories.

Given these structural and thematic foundations, Sadlier uses the remaining chapters to further develop biographical analysis. Chapters 5 and 7 examine a number of features with a biographical subject structure. These chapters explore the multiple methods used in both documentary and fiction to showcase the inventive and creative mechanisms biographical documentaries have historically displayed in Brazil. Chapter 5 does so with particular focus by analyzing the canonic film Iracema, uma transa Amazônica (Jorge Bodansky and Orlando Senna, 1975). Notably, Sadlier establishes the hybrid character of the film—neither fully fiction or documentary—through the context and usage of newsreel footage.  A head-on criticism of the process of modernization of the Amazon promoted by the military, the film tells the story of Iracema, a young prostitute of Indigenous descent. The discourse of progress proclaimed through the construction of the Trans-Amazônica highway seen in the footage highly contrasts with the desolation and loneliness of the main character, and the exploitation she is subjected to. The film is biographical in that it portrays the uncertain identity of an abused and devastated nation.

The chapter then analyses three documentaries about the most significant presidents up to that moment, Getúlio Vargas, Juscelino Kubitscheck, and João Goulart, portrayed in the films Getúlio Vargas (Ana Carolina, 1976), Os anos JK. Uma trajetória política (The JK Years: A Political Trajectory, Silvio Tendler, 1980), and Jango (Silvio Tendler, 1984). Sadlier highlights how the past works as a canvas to project and imagine possible futures, at a time when the military regime had started to show severe fractures as a vigorous opposition and social movements were gaining traction. In that regard, Eduardo Coutinho’s 1984 Cabra marcado para morrer (Twenty Years Later) works as a paradigm for the use of fictional resources to construct documentary features through the reenactment of entire sequences. The film tells the story of the assassination of a rural worker and leader of the Paraíba peasant leagues, João Pedra Teixeira, ordered by landowners in 1962. Production on the film began in 1964 and was interrupted by the coup in March of that year. Teixeira’s widow and children went into hiding; so did the crew. Many of the leaders originally featured in the film were imprisoned and tortured. Twenty years later, Coutinho returns and resumes the film, now telling the story of what happened to the protagonists during the two decades following the coup. In the same vein as Iracema, Sadlier shows how each film is both a biography of characters as well as a biography of a nation.

The documentaries analyzed in Chapter 7 form a group of heterogenous biographical features focused on the world of creativity and artistic production characteristic of the 2000s. Documentaries about Carmen Miranda, Tom Jobim, and Nelson Freire attest to music as a core element of Brazilian popular culture and national identity. These three features delve into the complexities and uncertainties of artistic creation, particularly evident in the documentary about Miranda. The chapter also examines Joel Zito Araujo’s magnificent A negação do Brasil (Denying Brazil, 2000), which scrutinizes the representation of Afro-Brazilians in a wide array of films and soap operas. Along with Dzi Croquettes (Raphael Alvarez and Tatiana Issa, 2009), these two documentaries interrogate the meaning of cultural and racial diversity in the country, the subject of Chapters 6 and 8.

Taken together, the remaining chapters analyze the documentaries made in the last 20 years and how the quest for national identity is deconstructed by centering traditionally excluded subjects. Yndio do Brasil (Our Indians, Sylvio Back, 1995), Aboio (Marilia Rocha, 2005), O fim e o principio (The End and the Beginning, Eduardo Coutinho, 2006), and Seca (Drought, Maria Augusta Ramos, 2015) are linked in their depictions of the invisiblized everyday lives and experiences of vast sectors of the population, lacking representation or consideration of any kind in mainstream media. These links are made clearer by Sadlier’s research and methodology. Though these biographies differ from those analyzed in the previous chapters, they are equally powerful. In these anonymous but revealing stories, Sadlier shows the full scope of struggle and survival, while also capturing its poetic meaning.

Paula Halperin is the Director of the School of Film and Media Studies and Associate Professor of Cinema Studies and History at Purchase College, SUNY. paula.halperin@purchase.edu