A Memory for the Future

In post-revolt Chile, experiences in the Constitutional Convention provide a foundation for reinvigorating the process of change, with social movements at the helm. 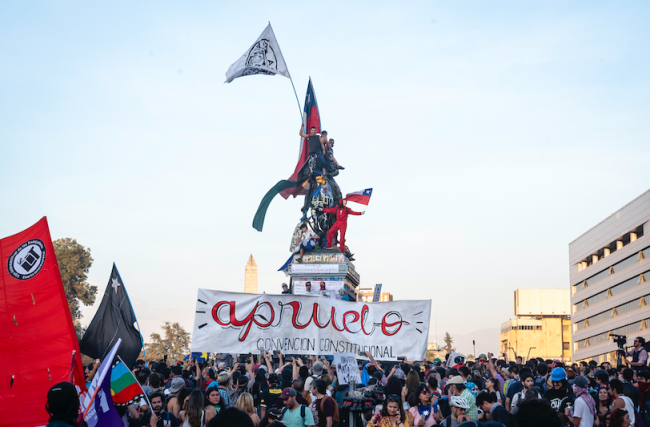 There are certain dates that seem to carry dramatic historical significance. In Chilean history, September 4 is one such example. In the presidential election on September 4, 1952, Chilean women exercised their right to vote for the first time. On the same date in 1970, Salvador Allende won one of the most crucial elections in the country’s history, opening a period of hope but also acute political tension.

This year, September 4 once again reemerged as a pivotal date. Casting their ballots in a plebiscite that decided the fate of a draft new constitution, 62 percent of Chileans voted for the “Rechazo” (reject) option. Although the vote marked an end to the proposed constitution, the Constitutional Convention that drafted it will be remembered as one of the most democratic bodies of the republic’s history because of its commitment to enshrining social rights and broadening the definition of the state.

Like the September 4 dates that came before it, September 4, 2022 will hold a place in Chile’s historical memory as a decisive marker of a new political period.

Mobilizing Fears in a Fragmented Society

The disheartening results of the September 4 referendum have led many to ask: What happened? What was rejected? Some of the earliest answers to these questions came from the political parties of the right and center-left. They argued that what people rejected was not just the draft constitution, but the very ideas and values it represented: a social and democratic state, guaranteed social rights, participatory democracy, recognition of Indigenous peoples and their territorial claims, and the general idea of a society based on solidarity, gender equality, social justice, and ecological awareness. They said it was a political project that was defeated.

However, it is not clear that was the case. Post-referendum opinion polls and other studies show that most people who voted to reject the draft constitution did, in fact, approve of those values and the improvement in living conditions that the proposed charter represented, including better wages and access to housing, health care, education, and pensions. Many of the concerns that people explicitly cited as the reasons they voted against the draft were based not on the actual contents of the text, but on the talking points of those who opposed the proposed constitution. According to a study by the Center for Investigative Journalism (CIPER), some of these reasons included people’s fears that they would lose their homes, that Chile would be torn apart into several different countries, that abortion would be legal up to nine months of gestation, that drug dealers and criminals would be elected to office and run the country, and that the national flag and anthem would become obsolete. These polls and studies ultimately showed that there was a disconnect between the draft’s content and the motives behind the Rechazo vote.

In the aftermath of this confusing outcome, there is an opportunity to develop a better understanding of Chilean history and politics. The social fragmentation and exclusion from party politics of a large majority of the population enabled opponents of the constituent process to use traditional and social media to present both the Constitutional Convention and the charter it drafted as threats to everything that Chileans hold dear. Crucially, this came at a time of economic crisis that has exacerbated many people’s concerns about the vulnerability of their homes, their safety, and their values. Using nationalistic and conservative tropes, the right-wing parties used the holy trinity of family, property, and nation to mobilize fears that are deeply felt in the precarious lives of the Chilean working class.

In other words, the results of the referendum are not just a tally of votes but a glimpse into the political consciousness and correlation of forces in Chilean society. In sum, the Rechazo won because people voted against what they perceived as a direct threat to their living conditions. Now, the key aspects of the new historical period opened up by the referendum depend not only on the pending constitutional change, but most importantly on whether the social and political forces at play can propose an alternative to the economic and political crisis first expressed through the urgent calls for a new constitution in 2019.

There are three key historical moments that help explain the current political situation: the neoliberal 1990s, the turbulent 2000s, and the turning point of 2019. First, in the early post-dictatorship years a civilian administration continued the neoliberal policies of the Pinochet dictatorship (1973-1990). At the same time, these administrations, led by the Concertación coalition, approved some democratic reforms that allowed the center-left parties of that coalition to present themselves as doing more than simply deepening the economic program of the dictatorship. In step with the neoliberal credo of the Chicago Boys, the new political elite focused on reducing extreme poverty while increasing access to the consumer marketplace, albeit through private debt. The “Chilean miracle” became defined by a society of new homeowners, car owners, and cell phone users. For some, it also included higher education degrees. But this new society also included a dark underbelly: precarious jobs, unsustainable debt, and growing inequality between the poor and the rich. Privatization of social services like health care, pensions, and education reinforced this inequality by enabling a process of forced segregation in urban peripheries, decaying hospitals and schools, and a polluted environment. But contradictions do not last forever. 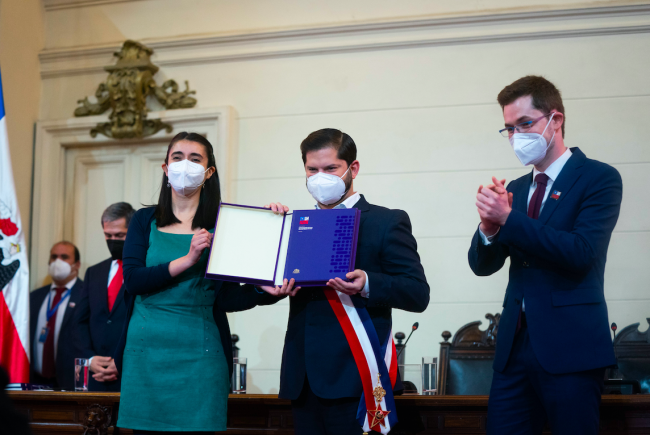 Second, a decade after the end of the dictatorship and in the aftermath of the Asian financial crisis that hit Chilean shores between 1997 and 1999, a burst of popular responses shook the neoliberal normality. Such grassroots actions included student mobilizations, labor unrest, Indigenous resistance to the toxic mix of colonialism and the super-exploitation of natural resources in their ancestral territories, and land occupations led by poor families looking for a dignified place to live. The student movement played a central role in shaking off the optimism of the 1990s. In 2006 and 2011, massive student protests and occupations of schools and universities represented a watershed moment. These students were part of a new generation that grew up under democratic conditions—or at least not under the immediate militarized threat of torture, exile, and forced disappearance. They were not afraid to confront the neoliberal regime and demand what was promised to them: access to education, decent living conditions for their communities, and true democracy. The student movement, together with feminist, Indigenous, and environmentalist movements and communities deeply impacted by extractive industries like mining, forestry, agribusiness, and energy production, became the living fragments of an organized people that demanded structural change in a rigid capitalist society.

Third, two important mass mobilizations in this long chain of struggles represented the immediate origins of the 2019 revolt. In both cases, social movements pointed directly to the heart of the miraculous Chilean contradiction. In 2016, millions took to the streets to protest Chile’s privatized pension system, the Private Funds Administrators or AFP. Beginning in 1980, the AFP had turned a social security system into a private insurance and savings system that forced workers to move parts of their income into individual accounts managed by private financial corporations. According to a study commissioned in 2014 by the Chilean government, since the mid-2000s the exhaustion of the system has been expressed in chronic poor returns and miserably low pensions for retirees: between 2007 and 2014, 50 percent of pensioners received monthly pensions that were less than or equal to $109, in a country with an average monthly minimum wage of $319 in that same period. The OECD has reported that as of 2007, the assets managed by the AFPs amounted to over 60 percent of the GDP. Its relevance in the national economy makes the privatized pension system one of the pillars of the Chilean economic model. But during the 2016 protests, that pillar was irrevocably wounded in the collective imagination.

Pablo Abufom is a member of Movimiento Solidaridad, an anticapitalist and feminist organization based in Chile. He is an editor of Posiciones, Revista de Debate Estratégico, a founding member of the Centro Social y Librería Proyección, and part of the editorial collective of Jacobin América Latina.