Colombia on Cusp of Decriminalizing Abortion

With a majority vote in the Constitutional Court this week, Colombia could become the first country in Latin America to remove abortion from its penal code. 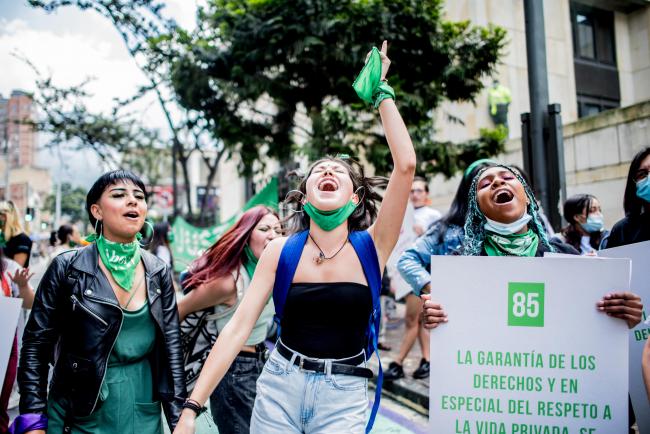 A few months after arriving in Colombia with her three children, Evaluna, a then 22-year-old migrant from Venezuela, discovered she was pregnant.

“I felt scared; I was very depressed,” she said, after finding out the news. “I had no way of maintaining [the baby] because I didn’t have a job.”

In 2018, Evaluna, whose name has been changed, fled her home in Venezuela to neighboring Colombia, where, like more than half of the 1.7 million Venezuelan migrants in the country, she now lives with irregular migratory status. Although this restricts her access to formal employment and some health services, she can legally access emergency healthcare, regardless of her migratory status. In Colombia, abortion has been legal in cases of rape or incest, inviability of the fetus, or risk to the mother’s life or health since 2006, and emergency healthcare includes abortion.

Evaluna decided to terminate the pregnancy. A doctor confirmed that Evaluna’s pregnancy would present a risk to her physical and mental health and referred her to a public hospital where doctors could perform the procedure. There, however, staff refused to perform the abortion because they claimed Evaluna did not have the correct papers. In order to proceed, they said Evaluna would have to travel to Bogotá—a 14-hour bus drive away, which she couldn’t afford.

However, Evaluna suspects there were other reasons the hospital staff refused to perform the abortion.

“They told me I shouldn’t be doing it,” she recalled. “They didn’t accept it.”

Soon, experiences like Evaluna’s could be a thing of the past. Last year, over 90 organizations and over 100 activists joined the movement Causa Justa Por el Aborto and filed a lawsuit against Colombia’s Constitutional Court to remove abortion from the country’s criminal code. Nine judges are due to debate the legislation by November 19. If a majority votes in favor, Colombia would become the first country in Latin America to remove abortion from its penal code. This would allow more women and girls, especially vulnerable ones, to seek legal and safe abortions and access contraception and sexual health information. It will also provide a better environment for healthcare professionals to work in.

According to Causa Justa, the current ambiguity surrounding abortion creates barriers to accessing the service even when a case meets the legal requirements. A survey of 428 women carried out by Doctors Without Borders revealed that 88 percent of them had faced at least one barrier to interrupting their pregnancies in Colombia.

“The fact that [abortion] is still a crime except for on three grounds is confusing for many people, and it allows for misinformation,” explained Mariana Ardila, managing attorney at Women’s Link Worldwide, the NGO that wrote the legal action on behalf of Causa Justa.

For Maria Isabel Niño, legal advisor for the Mesa por la Vida y la Salud de las Mujeres collective working toward women’s sexual and reproductive rights, the criminalization of abortion is “the principal barrier to access to abortion itself,” because of the stigma and prejudice it creates.

What’s more, Mesa por la Vida y la Salud de las Mujeres calculates that abortion crime charges have exponentially increased since its partial decriminalization in 2006. Since 2008, approximately 400 women have been criminally charged over abortion each year in Colombia: a 320 percent increase compared with the year 2005.

The stigma surrounding abortion in Colombia disproportionately affects vulnerable migrant women such as Evaluna, women from rural areas, young women, Afro-Colombian and Indigenous women, and poor women who do not have the financial resources to travel to access the procedure.

“Women in small cities don’t have many options,” explained gynecologist Laura Gil, co-founder of Grupo Médico por el Derecho a Decidir, a group of doctors working for women’s sexual and reproductive rights. “Often, they have to travel to the capital with their own economic resources which, clearly in many cases, they don’t have.”

Causa Justa calculates that 97 percent of women being investigated for abortion crime live in rural areas, and data shows that the leading regions for criminal abortion convictions come from the rural departments of Caldas, Boyacá, and Santander.

The stigma surrounding abortion also affects doctors, especially in rural areas, where hospitals have fewer medics who are often overworked and ostracized if they offer the procedure. Causa Justa argues that this violates their freedom to work.

Regardless of whether they are for or against abortion, “the majority of doctors don’t want to be identified as abortion providers,” Dr. Gil said.

“In big cities there is a lot of anonymity,” she added. “But if you’re a specialist in a small city home to 1,000 people, lots of people know who you are and if you start offering abortion services, people can socially stigmatize you.”

To avoid being forced into motherhood like Evaluna, many women in Colombia continue to access abortion through unsafe methods or “clandestine” clinics. In 2008, the number of abortions performed legally within the Colombian health system was less than one percent.

Clandestine abortion clinics are unregulated, meaning they are run by untrained professionals who often operate in unsanitary and unsafe conditions, Dr. Gil explained. This increases the risk of complications that require medical attention by 33 percent—or up to 53 percent for rural women. Women soliciting abortions also risk being economically, physically, or sexually abused by providers.

Furthermore, if patients suffering from complications seek medical attention, doctors often report them, out of fear they could suffer repercussions themselves for being complicit. In fact, more than half of abortion cases that result in a criminal conviction stem from reports by medical personnel.

For Dr. Gil, not only does this violate medical ethics and patient confidentiality, but it can also be traumatic for women and discourage them from accessing post-abortion care if they experience complications. As a result, approximately 70 women die each year from unsafe abortions in Colombia. 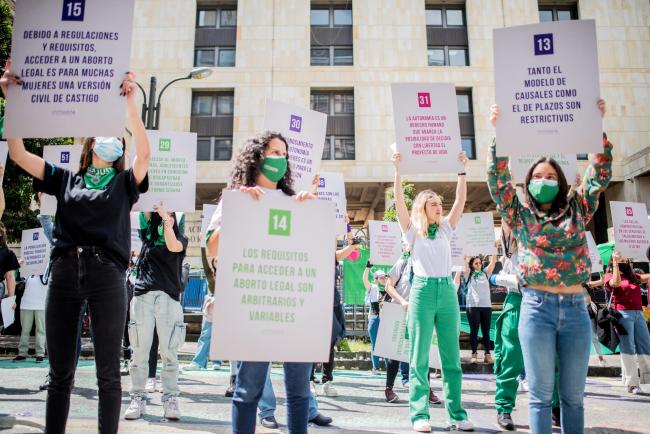 Causa Justa decided to pursue legal action against Colombia’s Constitutional Court in 2020, during Latin America’s “green wave” for women’s reproductive rights. In December 2020, Argentina made abortion legal in the first 14 weeks of a pregnancy, in March 2021 Veracruz became the fourth Mexican state to decriminalize abortion, and in September, Mexico’s Supreme Court deemed it unconstitutional to penalize abortion in the state of Coahuila.

Referencing a recent survey in which only 20 percent of Colombian women think abortion should be illegal, Ardila of Women’s Link said she believes Colombia is ready to redeem its place as the vanguard of women’s reproductive rights in Latin America.

But not everyone shares this opinion. Deisy Álvarez Toro, executive director of Red ProVida Latam, a pro-life network based in Medellín, claims it would be “profoundly sad” if abortion were decriminalized in Colombia.

Red Provida Latam believes in defending life from conception to natural death and teaches young people and their families to prevent unexpected pregnancy via sex education workshops, in which guest speakers share their own experiences. It also provides support and job opportunities for pregnant women in “crisis,” as well as support for people experiencing psychological consequences after an abortion.

“We defend life because it’s the normal thing to do…it’s what everyone should be doing,” said Álvarez. “It would be strange for a human race to kill itself,” she added.

But for Mesa por la Vida y la Salud de las Mujeres, the decriminalization of abortion would be a great achievement for all women in Colombia. With the option to choose motherhood, the collective believes that women, especially vulnerable ones, will be able to improve their quality of life. For some, that choice may also help them escape violent situations.

“It’s very important for Colombia’s democracy, because [women] would be recognized as full citizens with the freedom and autonomy to decide over our reproduction and our lives,” said Niño, the collective’s legal advisor.

Coordinator Laura Castro also believes that reevaluating women’s rights, particularly reproductive ones, is a necessary part of Colombia’s transition to a peaceful society, given that women’s rights and reparations for gendered harm featured in the country’s 2016 peace agreement.

“Until women have full autonomy over our bodies and the decisions regarding them, we will not be able to contribute [to peacebuilding],” she said.

So far, the prospects look good. Since the 2006 decision to partially decriminalize abortion, the collective has seen Colombia’s Constitutional Court as a key ally in guaranteeing and progressing women’s rights. This, along with favorable public opinion, large social mobilizations, and the court’s recent progressive decision-making regarding euthanasia, has left pro-choice activists hopeful.

“These are all signals that the moment is right,” Ardila of Women’s Link said.

If the legislation passes, there is still a long way to go to eliminate the social stigma around abortion. The collective’s plan of action includes a territory-by-territory approach to education and conversation to dispel the myths and prejudices surrounding abortion in Colombia as a whole.

“It will be a huge win,” said Niño. “But there’s also a lot of work to be done for this decision to become a reality.”

Sophie Foggin is a freelance journalist based in Medellín, Colombia covering human rights, politics, and gender issues in Latin America.