The leftist frontrunners in the May 29 presidential election have promised to prioritize environmental policies, including implementing a regional treaty to foster a sustainable economy. 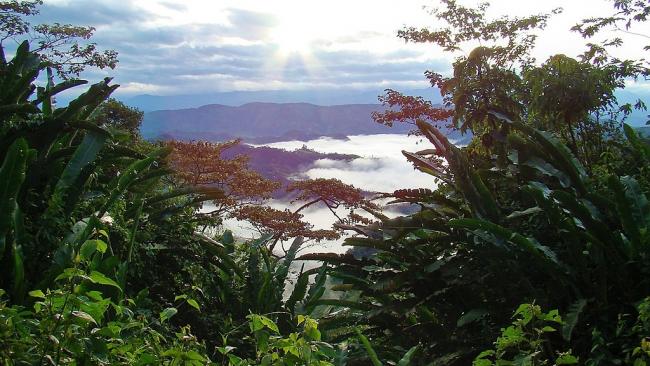 Colombia has a grim track record of violence against human rights defenders and environmental activists. In 2020 alone, an estimated 65 land and environmental defenders were killed within its borders, more than in any other country in the world. The communities most threatened by ongoing extractivism and deforestation—which include Indigenous peoples, Afro-Colombians, and farmers—are often those with the least access to resources and information with which to defend themselves.

Colombia is the second-most biodiverse nation in the world. Its ecosystems and natural resources are not only important to Indigenous and rural communities, but also provide the foundation for the economic and societal wellbeing of Colombia as a whole. These communities and their defenders are being threatened at record rates by international corporations driving mining, oil and gas projects on their land.

The upcoming first-round presidential elections on May 29 present a historic opportunity to provide not only these activists, but also the remarkable biodiversity they defend, with the protection they deserve.

Colombians Head to the Polls

If current polling holds, Gustavo Petro will become the first elected leftist president in Colombia’s history. His running mate, acclaimed environmental activist and lawyer Francia Márquez, would be the first Afro-Colombian woman to hold the title of vice president. Their joint campaign is built on a vision of an inclusive, peaceful Colombian society fuelled by a sustainable economy.

“Environmental activists are a threat to Colombia today,” said Márquez in 2020. Later, during her political campaign, she declared during an interview: “Colombia is a country that condemns and exterminates those who think differently.” As a vocal activist and lawyer who has represented minorities in rural areas and successfully halted illegal mining operations, she speaks from experience. Márquez has suffered regular threats and intimidation and survived assassination attempts on multiple occasions.

Petro, 62, is infamous across media platforms for having been a member of the urban M-19 insurgency, which operated between 1970 and 1990. Less celebrated are his vanguard environmental policy proposals, which include a full and rapid energy transition for Colombia, as well reining in international conglomerates operating with impunity and questionable contracts across the country.

At a recent conference in Bucaramanga, Petro and Márquez signed a pact to ratify the Escazú Agreement should they win the elections.

The Escazú Agreement is a groundbreaking regional treaty that guarantees access to information for Latin American and Caribbean environmental activists and allows them to participate in decision-making processes related to environmental justice. The document, which was drafted in Escazú, Costa Rica and adopted on March 4, 2018, lays out a clear strategic plan of what needs to be done in order to safeguard and legitimize the work of environmental defenders.

If implemented in Colombia, the Escazú Agreement would be a powerful legal tool to combat the country’s ingrained socioeconomic inequality. By giving environmental considerations the same weight as economic goals, the voices that advocate for nature will in turn be amplified and accorded due respect. 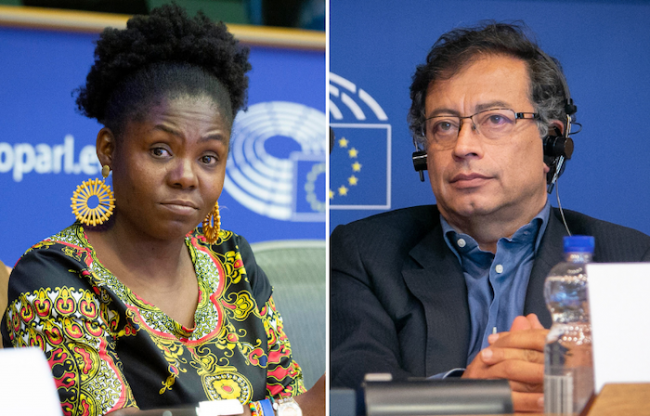 Colombia signed the Escazú Agreement along with 24 other countries, but then failed to ratify it before the end of the designated period. The signing took place in 2019, a year marked by widespread dissatisfaction with the Colombian government’s decisions on environmental issues such as deforestation, extractivism, and restrictions on citizen participation. Various popular movements that had gained traction throughout the year culminated in a national strike on November 21. Environmental leaders joined forces under the umbrella of the National Strike Committee to demand justice for the dozens of activists and social leaders who have fallen victim to targeted violence.

During negotiations with protest leaders, President Iván Duque promised that Colombia would implement the Escazú Agreement. Duque issued a message of urgency regarding the matter and demanded that Congress address it. However, multiple attempts to put the issue to a vote before the deadline on June 20, 2021 were postponed due to lack of time and objections from congress members. These objections included claims that Colombia’s existing legal framework for protecting environmental rights was already sufficient and that ratifying the Escazú Agreement would obstruct private investments, hinder business operations, and undermine national sovereignty. Ultimately, the proposal sank without being formally debated.

According to the Business & Human Rights Resource Centre (BHRRC), an international nonprofit organization that monitors and maintains a database of attacks against human rights defenders working on business-related issues, Colombia is consistently one of the most dangerous countries in the world for defenders opposing business projects. The extractive industry accounts for a huge portion of total cases: 40 percent of attacks recorded in the country in 2020-2021 were linked to the oil, gas, and coal sectors. Issues around extractivism and human rights began in the late 1980s, when petroleum deposits were discovered along the border with Venezuela. The arrival of multinational petroleum firms from Britain, France and Germany eventually led to a situation where local paramilitaries, linked to official armed forces, committed crimes against humanity. Some former military officials were contracted by these firms as private security.

“Around the same time, which coincided with the two terms of President Uribe, there began a very serious phenomenon of forced disappearances and destruction of farmer organizations by paramilitaries, in complicity with official armed forces, as identified by British scholars,” said a spokesperson for BHRRC.

“All of these phenomena [targeted violence] are linked to a political class which also happens to be a business class—many even overtly have positions within these major extractivist businesses: mining, gas, energy and agriculture,” the spokesperson added. “What we’re talking about is not one person but a revolving door of self-interest." This phenomenon exists across Latin America, but in Colombia it has been exacerbated by a long-running armed conflict set in motion during the 1950s, when peasant farmers from the south began to self-organize in order to protect themselves against expansion by a landowning elite. 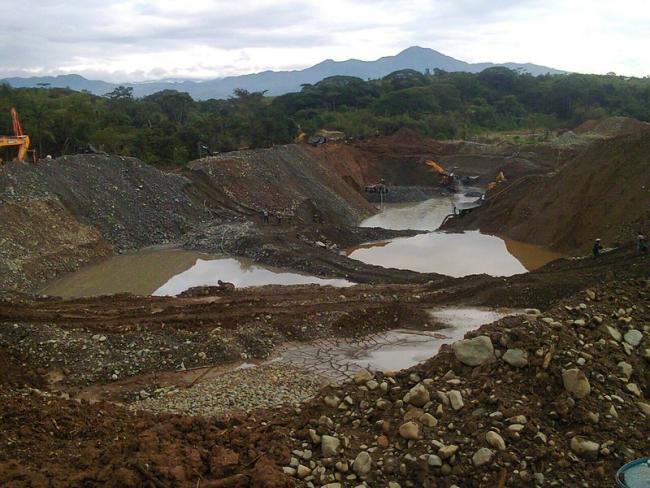 Now, the presidential elections are taking place five years after the signing of the historic 2016 peace accords between the government and the Revolutionary Armed Forces of Colombia (FARC), the country's largest rebel group. One of the primary conditions under which the guerillas laid down their arms was that the government agreed to implement comprehensive rural reform. This included facilitating alternative livelihoods—to shift communities away from reliance on coca growing and replace the income that militia groups once provided—as well as building infrastructure and improving access to education.

Progress towards this outcome has been fragmented, and in many regions nonexistent. The government’s failure to fulfill its promises has eroded an already tenuous trust and opened up power vacuums for militant splinter groups to take advantage of. According to the Kroc Institute, which tracks the progress of the agreement, a mere 4 percent of the proposed rural reforms had been completed as of June 2021.

“The absence of political will is because the ruling political and business class have a particular vision about the nation’s resources, and that is an extractionist vision,” said BHRRC’s spokesperson.

Campaigning for a Sustainable Economy

The agreement Petro and Márquez signed in Bucaramanga, the Pacto por el Agua (Pact for Water) centered on the importance of protecting the country’s páramos and waterbodies, in addition to ratifying the Escazú Agreement. It also included a commitment to ban fracking, which has been a contentious issue in Colombia for years.

One of the cornerstones of Petro’s campaign is a strategic 12-year plan to maneuver the economy out of its dependency on exporting fossil fuels, and transition it towards a tourism-based model.

For many, Petro’s vision for a sustainable economy feels out of reach. Some, like former Finance Minister Juan Carlos Echeverry, are concerned that halting oil exploration will hobble the economy and threaten an already vulnerable democracy. Others feel that it is too late for positive environmental change.

“If the Left wins for the first time in 200 years, the country has already been sold. The pandemic has been used to argue for increased extraction and industrial contracts. There are now more oil contracts sold, new offshore drilling is to take place in Arauca,” said BHRRC in a statement reflective of the widespread political disillusionment among Colombians.

In the runup to this year’s elections, it appeared that most of the candidates were aware of the importance of ratifying the Escazú Agreement, if only at the level of public opinion. At a public debate in February of presidential hopefuls seeking nomination, all nine of the invitees affirmed that they would prioritize its implementation if they won the elections.

“It is a huge contradiction that in a mega-diverse country like Colombia those who defend the environment and the territory are murdered,” said pre-candidate Luis Gilberto Murillo, ex-Minister of the Environment and Sustainable Development. “Globally, Colombia must send the message that the lives of social leaders, of environmental leaders, are protected here.”

Among the four candidates who progressed after the primary elections in March, two have made clear commitments to ratifying the Escazú Agreement should they gain power: frontrunner Gustavo Petro, and centrist Sergio Fajardo. Federico “Fico” Gutierrez, currently polling second, was initially opposed but has since expressed openness to the idea. The fourth candidate, Rodolfo Hernández, who is currently trailing close behind Gutierrez, recently came under criticism for appearing unaware of the agreement or what it entailed.

Accountability and Cooperation Across Borders

Colombia does have legal measures in place intended to protect environmental rights and activists. Two well-established organizations, the National Protection Unit and the Early Warning System, are meant to guarantee rapid responses to violent incidents and threats. Furthermore, articles 79 and 80 of the Constitution explicitly grant citizens the right to enjoy a healthy environment and hold the government responsible for preventing environmental degradation.

However, these existing legal provisions have long failed to protect environmental and human rights defenders. What makes the Escazú Agreement unique is that it holds countries accountable to each other and allows them to cooperate across borders without impacting their sovereignty.

Under Article 7 of the Agreement, every stakeholder that could be affected by an environmental project must be included in the decision-making process and provided with all the information necessary to provide informed contributions. This clause may cause further delays during future congressional debates. In 2018, the Colombian Constitutional Court decreed that public consultations would no longer be allowed to hinder projects that involved natural resource extraction.

"Popular consultations are a tool for defending the territory by citizens in the regions who cannot continue to stigmatize themselves,” declared Márquez during her presidential campaign.

The Escazú Agreement is the first treaty ever to include provisions for human rights alongside environmental protection. In Colombia, as much as anywhere else, the two are inextricably linked. If Petro and Márquez are elected and follow through on their commitment to ratify the Agreement, its success will ultimately depend on the extent to which environmental and human rights defenders are empowered to contribute towards making the decisions that affect their lives.

In the words of the acclaimed Afro-Colombian poet Luisa Villa Meriño, “It is complex to separate the violence exerted on human beings from that exerted on the environment. We know that it is the same damage; each breath of polluted air is one breath less for each living being on the planet, which is why disputes over land also represent disputes over bodies.”

Sita Bates is a freelance journalist whose work focuses on environmental policy and social justice issues. She holds a degree in ecology and environmental biology from Imperial College London.