In the southern Colombian department of Huila, Enrique Chimonja and his family are using institutional spaces of transitional justice to search for his father and to heal the wounds of the armed conflict. 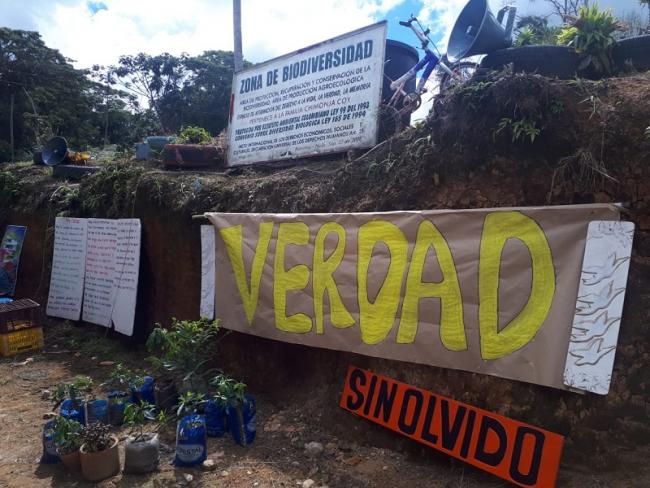 Enrique Chimonja Coy was born to a campesino family in the south of Colombia in the 1970s. They lived in the macizo Colombiano, an important water source where the Amazon meets the Andes. As a boy, he woke up before dawn every day, fed the horses, ate breakfast, and then went with his father to help him log timber, which was his family’s primary source of income. They didn’t use chainsaws or “technologies of today” as Enrique put it, but traditional hand tools that allowed them to exploit their environment without destroying it.

“This was how it was those first years of my life, a campesino life, a life in harmony with the territory, before it was interrupted by the conflict,” says Chimonja.

On September 3, 1983 the FARC-EP forcibly disappeared Tulio Enrique Chimonja, Enrique’s father. Just two years later, Enrique lost an uncle in a massacre in his home municipality of Palestina, Huila. His uncle was a member of the left-wing Unión Patriótica (Patriotic Union, UP) party which was created in the framework of the 1984 peace process with the FARC-EP, and suffered over 6,000 assassination of their members. “Other family members left for the war, never to be seen again,” Enrique says, counting up to eight family members lost to the internal armed conflict.

“I asked myself ‘what should I do?’… To find my dad, and to make sure such painful things never happen again,” Enrique says. He left Palestina in the 1980s, eventually joining the “Inter-congressional Commission of Peace and Justice.” He dedicated his life to being a human rights defender, accompanying communities throughout Colombia, and was named Human Rights Defender of the Year in 2017.

At home in Palestina, his family mostly held private ceremonies to remember Tulio Enrique Chimonja. This changed in 2005 with the demobilization of the paramilitaries, which gave them space to openly engage in “historical memory.” Enrique had taken note of the success of biodiverse zones and practices of memory in places like Chocó.

“We began to think about the idea of declaring the territory that we had left abandoned, for the absence of our dad, a ‘biodiverse zone’ in the south of Colombia, to honor the memory of our father and massacred uncle, and also for the memory of other campesinos that were also assassinated and disappeared,” he says.

Now, Enrique, his family, and other victims are occupying the mechanisms of transitional justice set up after the 2016 Peace Accord between the Colombian Government and the FARC-EP to expand their search for truth and justice, and finally find Enrique’s father. Using these institutions, they hope to empower themselves and find closure for the tragedy that has marked their lives for over 30 years. It is not a perfect process, but Chimonja pushes forward anyway in a search for truth and to honor the memory of his father. 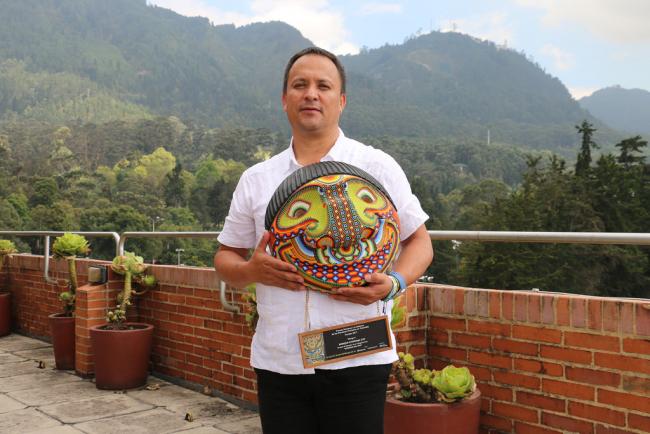 Huila and Ongoing Tensions of the Reconciliation Process

“Huila, Tolima, and Cundinamarca are where the political violence of the 1940s originated, and where guerrillas formed in the years ‘49 and ’50,” says Andres Restrepo, who leads the territorial team of Colombia’s Truth Commission in Huila and has been accompanying Enrique’s family. “These territories have formed guerrillas throughout the whole history of Colombia.”

By the 1980s, the FARC had territorial control of Palestina, Huila. Enrique said there was hope for peace with the FARC during the 1984 peace process, that the precarious social conditions could change. “As this didn’t happen, and what happened was repression and in some way the assassination and extermination of campesino leaders, there is a permanent fear in the population,” he says.

“Tulio Enrique Chimonja is one of many campesinos who lost his life — or in his case, enforced disappearance — for having found himself in the middle of an armed conflict,” Enrique says. Tulio Enrique was 33 when he was disappeared, the father of seven children. He couldn’t read or write as he had been excluded from educational opportunities. “His specialties were in the land, in agriculture, in animal husbandry, in domesticating horses, and in general any activities of the land,” Enrique says.

Enrique says his father had a conflict with a large landowner in his municipality, who was trying to claim all of the best lands for logging. “The FARC-EP took the side of this landowner… perhaps for the practical benefits that this person surely represented in terms of financing,” Enrique says. As a result, the FARC-EP disappeared Enrique’s father.

A few dozen other families are also working with Enrique in processes of memory and transitional justice. Some of these families lost sons or daughters who went to war as soldiers in the FARC and they never heard from them again, some too young to have been able to make a conscious decision. Another group were victims of enforced disappearance or assassination, such as Enrique’s family. A third group of victims were victims of state repression, principally during the genocide of the UP party.

Clarifying truth and achieving reconciliation in Huila won’t be easy. Restrepo says many in Huila are not willing to sit down with the FARC, and this department had voted against the Peace Accord in the plebiscite of 2016. Additionally, the Truth Commission is in its final year, so there is not much time left to take all of the victims’ testimony. Restrepo also pointed out that it has been a challenge to get the wider society’s attention about the activities of the Truth Commission, and that the media has not covered it very much.

Enrique says that the far-right in Colombia manipulated the plebiscite vote, by taking attention away from issues such as reconciliation, to issues such as “gender ideology” or that they were “handing the country over to terrorists. “The majority who voted NO aren’t direct victims of the conflict,” Enrique says. “Those of us who are the family of disappeared people, we are ready to sit down with anyone for the opportunity to find the remains of our loved ones.”

A key issue will be finding the victims. According to Restrepo, the FARC commanders of this zone during the 1980s died over the course of the war, complicating the search for disappeared persons, such as Enrique’s father.

“This is one of the most complicated and painful topics, because effectively there are cases that have been open for over 30 years, so this dampened hopes a bit, but we are going to exhaust the search,” Enrique says.

Comprehensive System of Truth, Justice, Reparation, and No Repetition

Enrique is a member of Comunidades Construyendo Paz en Colombia (Communities Constructing Peace in Colombia CONPAZCOL), which participated in the negotiations in Cuba prior to signing the 2016 agreement. They petitioned the FARC to hold a public act of reconciliation and recognition in various regions, including Huila. These public ceremonies of recognition have already happened for the victims of Bojayá in Chocó and of La Chinita in Urabá. The families in Palestina, Huila expect this act to happen in the first semester of 2021.

“In this work we have been mutually committed to strengthen peace through a dialogue of hope. The desire to find truth,” says Casika Atahualpa, a representative of the FARC in Huila who is working with the victims for the act of reconciliation. “Trust me, it hasn’t been easy to face these people, but when you have a commitment to reconciliation, then it works.”

Point five of the 2016 Accord set up the Comprehensive System of Truth, Justice, Reparation, and No-repetition (Sistema Integral de Verdad, Justicia, Reparación y no Repetición). This includes the Truth Commission, an extra-judicial mechanism that aims to offer a sort of official truth as to what happened over the course of the armed conflict, the Unit for the Search of People Given as Disappeared, an extra-judicial mechanism that looks for disappeared people, and the Special Peace Jurisdiction (Jurisdicción Especial para la Paz, JEP) the judicial mechanism charged with investigating and sentencing crimes committed during the armed conflict.

For the moment, the JEP has opened seven cases, considered to be the most emblematic. These can be thematic, as in the case about the genocide of the left wing political party Unión Patriotica (Patriotic Union) or they can cover a territory, as in the case of Urabá or Nariño.

Others say the current government’s lack of support for the implementation of the Peace Accord is holding it back.

“The current government, instead of supporting the institutions created in the peace accords, hasn’t attacked them directly but it also hasn’t contributed to legitimize them, and this has had a negative impact,” says Juan Gabriel Gomez, professor at the National University of Colombia and author of a chapter of the book The No Won Colombia Lost.

Ivan Duque came to power in 2018 as a far right-wing candidate, a protégée of Alvaro Uribe who was president from 2002-2010. Uribe is the leader of the Democratic Center party which led the NO campaign in 2016 against the Peace Accords. Duque promised to “modify” the accord once in power.

The Duque administration has said the implementation is going well, in spite of contrary evidence. The peace accord remains underfunded, with projections that it will take up to 25 years to implement. Sixteen congressional seats that were to be assigned to victims have not been passed, the army has ravaged the countryside against coca growers who had signed voluntary substitution agreements, and there is even U.S. complicity in sabotaging the accords.

What’s more, the conflict in Colombia is deepening. Massacres are on the rise, which the government denies, and FARC members who have signed and demobilized are being killed.

Enrique looks to push back against an attempt to destroy the Peace Accord. He says that while the Truth Commission will end this year, he will continue to convince more of his neighbors to join his movement.

“We believe that the most important thing we’re doing is trying to alleviate and heal the wounds that the war has left us,” he says.