Ignored by the media and lacking a political machine to back her, the vice presidential candidate looked abroad to garner support. 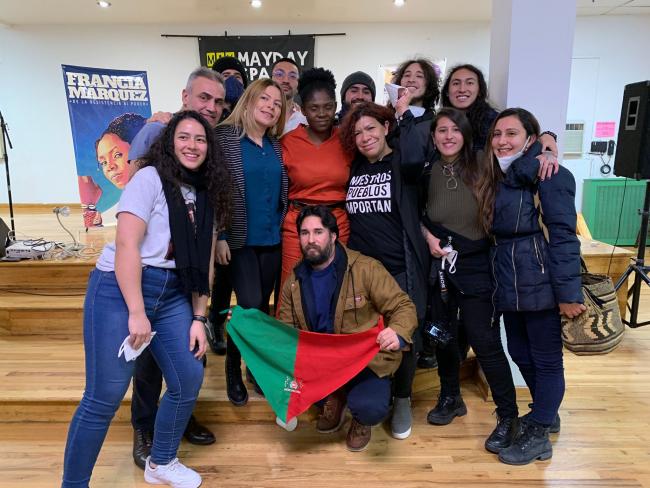 Speaking in a mix of Spanish and English, a crowd trickled into the Brooklyn tea shop, settling into the back room strewn with patterned carpets and cushions, teal folding chairs, and mismatched colorful couches. The hip space—which bills itself on Instagram as an “earth-to-table apothecary”—is just the sort of hangout where you’d expect to meet young progressives and activists, intent on reforming the system and redistributing power.

On this evening in November 2021, the tea house was hosting a campaign event. But rather than a contender for New York city council, borough president, mayor, or state senator, the night’s featured candidate—who was attending over Zoom—was running for president of Colombia.

“We hope to be able to count on your support in raising awareness of our campaign, on the support of leaders in the United States who can use their voice to help us in our collective fight,” Francia Márquez said, projected larger than life on the tea shop wall. When she finished speaking, the room erupted in applause and whistles.

June 19 is the second and final round of Colombia’s presidential elections. The race has come down to two anti-establishment candidates: populist businessman Rodolfo Hernández, who has little political experience, and leftist Gustavo Petro, whose election would end decades of rightwing leadership. As the polls predicted, Petro won the most votes in both the primaries and first round, but Hernández as the runner-up came as a surprise.

Perhaps the most surprising outcome of this year’s election cycle, however, has been Márquez’s meteoric rise. Although she failed to garner enough signatures to run as an independent presidential candidate, her star performance in the Pacto Histórico coalition's primaries secured her spot as Petro's running mate. This Sunday, she could become Colombia’s first Black vice president.

An Afro-Colombian environmental activist and lawyer, Márquez is new to politics. Since announcing her candidacy, Márquez has become a rallying point for Colombian activists and youth dissatisfied with the status quo. She is only the second Black woman to run for president in Colombia and campaigned on a platform that challenges the traditional powers in a highly militarized, conservative country. Unlike other presidential candidates, Márquez is from a small majority-Black town in southwest Colombia and doesn’t have a political machine behind her. So she did something that other candidates did not: she appealed to the Colombian diaspora.

Decades of violent conflict has forced millions of Colombians to flee their homes, especially in the 1980s and 1990s. While most moved to Colombia’s cities, nearly five million—10 percent of the country’s population—migrated or took refuge abroad, the majority settling in Spain, Venezuela, and the United States.

The first country in Latin America to extend voting rights to citizens living abroad, Colombia has allowed expatriates to vote in presidential elections since 1961. Colombia’s 1991 constitution expanded the right, granting Colombians living and traveling outside of the country permission to vote in both presidential and congressional elections. The new constitution also created a congressional seat to represent expatriates. Nevertheless, the Colombian diaspora has never been very politically active.

In the first 25 years of expatriate voting, abstention levels consistently exceeded 90 percent. In the second round of the 2018 presidential elections, the abstention rate for expatriates was 82 percent, compared to 47 percent of citizens in Colombian territory. This year is looking better: 31 percent of registered expatriates voted in the first round elections on May 29.

Still, of the estimated nearly five million Colombians living abroad, only about one million are registered to vote, and the process of voting is complicated. Citizens must vote in person at a consulate. For many, getting there can be expensive and time consuming.

But many Colombians living internationally remain closely connected to their homeland. In 2022, remittances from abroad reached a record $8.6 million, making up about 2.5 percent of the country’s GDP.

According to international affairs analyst Milena Gómez Kopp, the lack of electoral engagement doesn’t stem from Colombians abroad being uninformed. “They watch tv, keep up with the news. They know what’s going on but they don’t participate in political activities,” Gómez Kopp said. Many have called on the government to pay more attention to expatriates and offer the option to mail absentee ballots.

“The diaspora has been ignored by politicians,” Gómez Kopp added. “I would think that there’s an opportunity to get more support in the diaspora.”

At the end of last year, New York City volunteers supporting Márquez’s campaign planned weekly events around the city, stationing themselves in Washington Square Park, lower Manhattan, Brooklyn bars, and Queens cultural events for hours, publicizing their locations on social media in hopes that fellow Colombians would stop by.

After the three-hour event at the tea house, which featured documentaries about Márquez’s life, attending volunteers went table to table collecting signatures to get Márquez included on the primaries ballot. Volunteer Luz Carvajal Villalobos chatted with Colombian grad students about spreading the word.

“I have family who could also sign,” one student said. “How can they find you?”

Ultimately, Márquez did not get the signatures she needed to run as an independent. In December, she joined Pacto Histórico, a the leftist coalition led by Petro that aims to represent Colombia’s marginalized groups. The alliance seemed doomed to be short-lived when Márquez denounced Petro after candidates from her Soy Porque Somos movement were excluded from the coalition’s list of congressional postulants.

But Márquez remained with the coalition, and in February, she took a “Tour de Francia,” visiting Washington D.C. and New York. Registration for the New York event was limited due to Covid restrictions, but the list filled up so quickly that they organized two back to back presentations. After the presentations, most of the hundred or so attendees lined up to get a photo with Márquez, who, despite Covid, hugged, kissed, and greeted everyone individually. 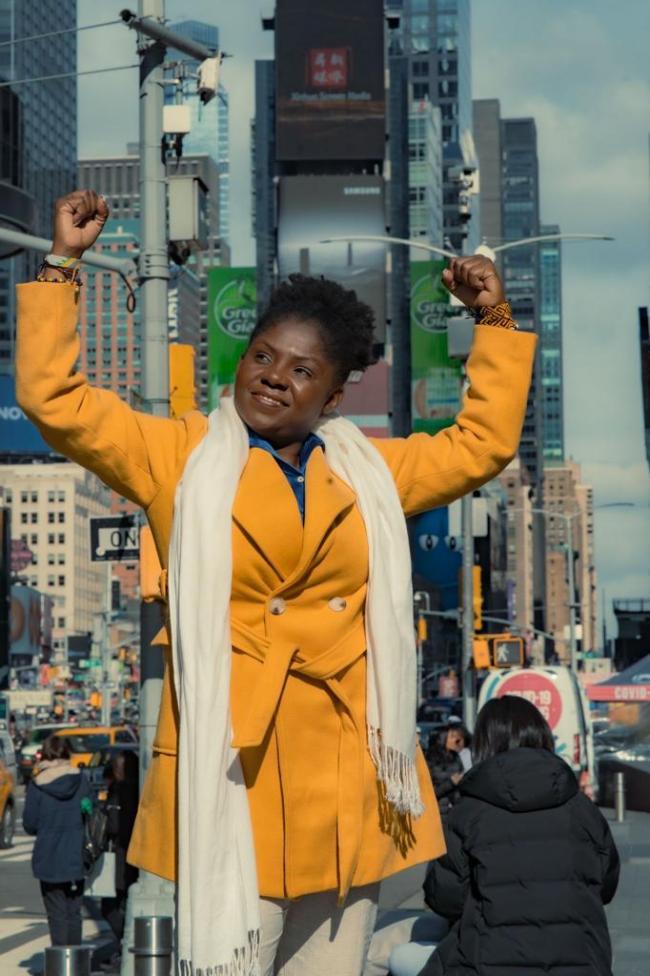 At the time, Márquez was visiting multiple cities a week in the lead up to the primaries. With their inconsistent turnout, the modest events in New York hardly seemed worth the time of a busy presidential candidate. But international attention—however small—was essential for Márquez’s campaign. Despite her growing popularity in both Colombia and abroad, early media coverage of Márquez was limited.

“In the traditional media, you don’t see anything about Francia,” said New York organizer Elizabeth Castañedas at one of the early campaign events. “People in New York know more about Francia than people in Bogotá.”

The belief that the work has an impact on voters not just abroad, but also in Colombia, said Castañedas, motivated the volunteers to expand their international outreach to make Márquez a globally recognized name, and, hopefully, generate more interest and awareness in her home country. And their efforts paid off.

In the presidential primaries on March 19, Márquez received 785,000 votes, the third most of any candidate from any party, including many career politicians. According to Castañedas, 28 percent of votes for Márquez were from the diaspora.

“It was a surprise that she got such a high percentage of the vote,” said Gómez Kopp. “I knew she existed, but I had no idea she was going to be such a force.”

The week following the primaries, Petro announced Márquez as his running mate. Not long after, profiles on her appeared in major international publications, including The Guardian, The Washington Post, and The New York Times. In May, Márquez visited Washington D.C. again, where Castañedas said she met with NY representative Gregory Meeks and the Washington Office on Latin America, and was interviewed by CNN En Español. According to Gómez Kopp, no other Colombian candidates visibly sought to cultivate support abroad.

The diaspora has traditionally voted for rightwing candidates, and the May 29 first round was no exception. In the United States, conservative Federico Gutiérrez swept the first round, with 64 percent of U.S.-based Colombians’ votes, followed by Petro and Márquez with 16 percent. But the campaign’s efforts particularly showed in New York, where Petro and Márquez won the most votes, with 40 percent, and in the April congressional elections, when the diaspora elected Pacto Histórico’s Karmen Ramírez Boscán, an Indigenous Wayuu woman and human rights defender, as their representative.

Since May 29, Márquez’s diaspora supporters have focused their efforts on reaching communities that normally vote conservatively, like religious groups, and recruiting poll workers.

Internationally, the final round voting is already underway. Compared with the first round, voting rates are up, and it is shaping up to be a close race, with recent polls declaring it is “too close to call.” Amid a pandemic-induced economic downturn and on the heels of a historic social uprising, appetite for change is high, and the winner’s policies will determine the direction for the polarized country.

With such a tight race, many are concerned about fraud.

“I am optimistic that if the elections were transparent, we would win,” said Castañedas. But based on the past—including, she says, reports of fraudulent voting in Florida in the first round—she is concerned.

“We want transparent, viable elections in peace, but it looks difficult,” she said. “The fight continues.”

Liza Schmidt is the web editor for NACLA and a recent graduate of New York University, with dual master's degrees in journalism and Latin American and Caribbean Studies.