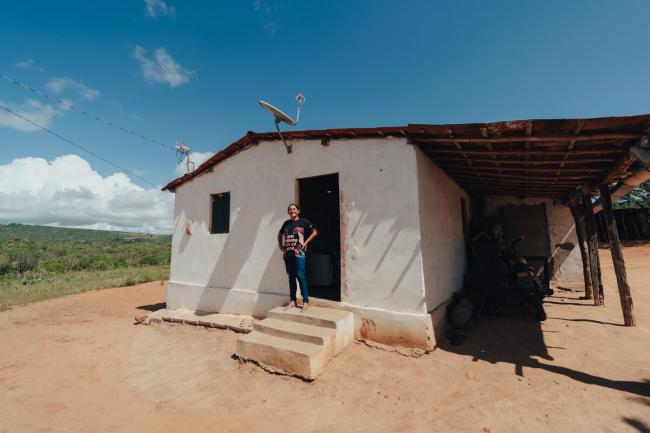 Translated by Matty Rose from the Latin America Bureau

Maria Helena Silva Barbosa, 39, lives in the village of Goiana in the Curimataú river basin, the driest part of the Borborema Territory in northeastern Brazil. Maria Helena, or Lena, as she is known, tells the story of how her parents—landless farmers without a plot of land of their own to work and live on—used to live a nomadic life. Whenever the region was hit by drought, they fled to the nearest brejo—a local term for the oases of humidity in the swathes of arid land, which are produced by sea winds that blow in from the coast.

Accessing enough water for the most basic necessities was a constant struggle. Early in the morning, Lena’s mother would leave the house with her daughters, each armed with a small bucket to collect water—unbeknownst to the landowner—from a barreiro, a system for collecting water that results from surface runoff.

Bathing was a luxury enjoyed only by the baby of the family, since the little water that there was could barely cover the drinking and cooking needs of a family of nine people. When Lena’s mother got a new job working in a local school, the family started to be able to afford things a little easier. Schooling opportunities remained limited for the girls of the family, however, since they had to take turns looking after the youngest child. “It was extreme poverty,” Lena summarized.

The arrival of water cisterns in the semi-arid Brazilian region called the Sertão at the start of the 1990s changed life for Lena’s family and so many others in the harsh rural expanses of the state of Paraíba. The arrival of the cisterns resulted from the work of local communities with civil society organizations under the umbrella of the Articulação Semiárido Brasileiro (ASA). The ASA network was founded in 1993 in opposition to the policies proposed by the Regional Superintendency for the Development of the Northeast (SUDENE), which were being made without the input of the local population, and ignored the reality of families who had lived in the Sertão for generations. Today, 3,000 organizations are part of the ASA, one of which is the AS-PTA Family Agriculture and Agroecology, an association which works to strengthen family farming practices and promote sustainable rural development across Brazil.

“Until that point, people saw the region as a land of backwardness, poverty, and unproductivity— of cracked earth,” said Marcelo Galassi, coordinator of the AS-PTA. “[Brazil’s] semi-arid region has, on average, three to four months of rainfall per year; the rest is dry. The [region's] communities have developed a strategy for keeping stocks of water, grain, fodder, and foodstuffs to help see them through the dry period. What the ASA did was to turn to this knowledge and systematize it, create a dialogue with the world of academia, adapt and innovate it, as well as mobilize people to expand existing public policy and create new ones to support these experiences and scale them up. Such practices were already taking place in the communities themselves, but it didn’t have much visibility and received little support from those in charge of public policy,” Galassi explained. 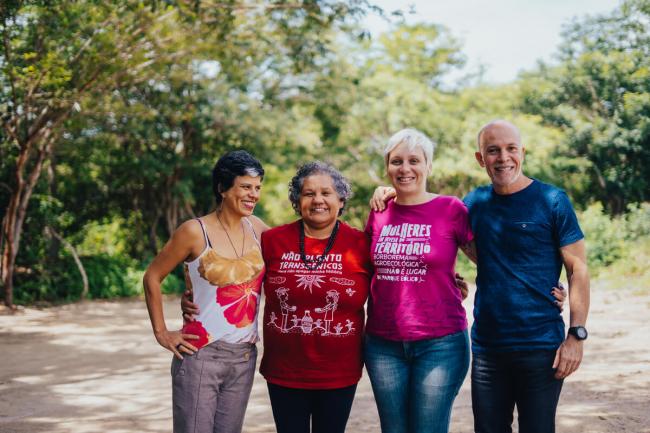 The AS-PTA and the Polo de Borborema, a network of trade unions for workers and rural laborers that is also part of the ASA, are readying themselves to face a new challenge: the progressive desertification of Brazil’s semi-arid region as a result of environmental degradation and global warming. This challenge is the focus of the 2021 Innovate Family Agriculture program, which helps family farmers in the semi-arid regions of Brazil adapt their practices around changes in the climate using agro-ecological technology. The program also brings together communities of shared origins and struggles, and grounds their work in collective resource management.

“Even in the semi-arid region, even in the years of drought, families have been producing there, carving out a space for themselves, creating markets, even without the help of public policy,” Rosalita Victor, political coordinator of the Polo de Borborema, pointed out. “The role of the ASP-TA and the Polo was to stimulate, mobilize, and exchange knowledge inside the territory,” she explained. “[It was also to establish] another perspective on the role of social organizations, hence the strong presence of trade unions and community organizations and the valuing of the knowledge of male and female farmers," she said.

The work started with the formation of the Borborema Agroecology Project, where a collective resource management training program was organized by women and young people. They aim to increase food security in the home through water reuse; the diversification of production by distributing seedlings, netting for chicken coops, vegetable growing kits, and beekeeping kits; and through the incentivization of sheep farming—in particular the Morada Nova species, which can feed itself on the vegetation of the Caatinga scrubland, even in the dry season. The project also promotes the collective use of equipment, such as pumps for refilling cisterns, a silage machine and cassava processing unit, as well as ecological stoves which save firewood and do not create smoke inside the house.

Victor explained that the organizations have actively participated in the process, debating the “collective management of land, grain, and water. People can clearly see that when multiple forms of community action converge, the community can face up to the drought without so much inequality [in how the effects are felt]. If there are stores of foodstuffs and water, then they don’t need to sell their animals during the dry season in order not to die of hunger. This is what we call a resilient community.” 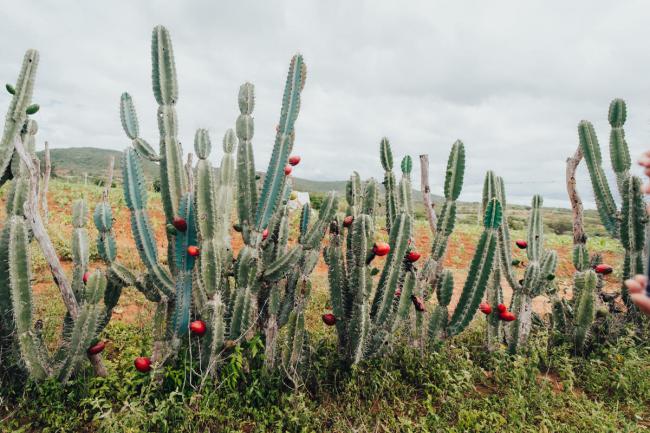 The regions of Curimataú, Cariri, and Seridó are the driest parts of Brazil’s northeastern state of Paraíba, explained Bartolomeu Israel de Souza, a professor of geosciences at the Federal University of Paraíba (UFPB). These regions were seriously affected by the extreme drought that lasted from 2012 to 2017. Despite a respite in the drought across some regions, it came back strongly in 2021 and 2022.

“In Brazil’s semi-arid regions, rainfall is heterogenous in space and time. However, from 2012 to now, there hasn’t been a single proper rainy season. It’s been an almost uninterrupted drought,” said de Souza “One of the main problems with the government’s plans [to deal with the drought], is that, on top of not having any continuity [from one government to another], they treat the Northeast as just one entity, whereas we are multiple and varied.”

For de Souza, projects such as Innovate Family Agriculture are a step in the right direction, although they are “drops of water in the ocean.”

“What they are doing with agroforestry systems, such as introducing exotic and native species whose potential is already known, is fundamental. The planting of native species, including cacti such as cardeiro and mandacaru, as living fences is an innovation created by these NGOs," de Souza said. These are small, very local projects, but they are "showing that there is a solution," he explained.

This solution is felt in a very concrete sense by the women involved in the project, such as Verônica de Macena Santos, 47. Verônica is the president of the Association of Small Rural Producers of Palma, and lives in a community in the municipality of Solânea, which received approximately 100mm of rainfall across the whole of 2021. Verônica met our reporters with her daughter, Larissa, and her youngest son, Luís Antônio, who is almost ten, has Down syndrome, and is the joy of the household alongside their prize bull, Castelo. 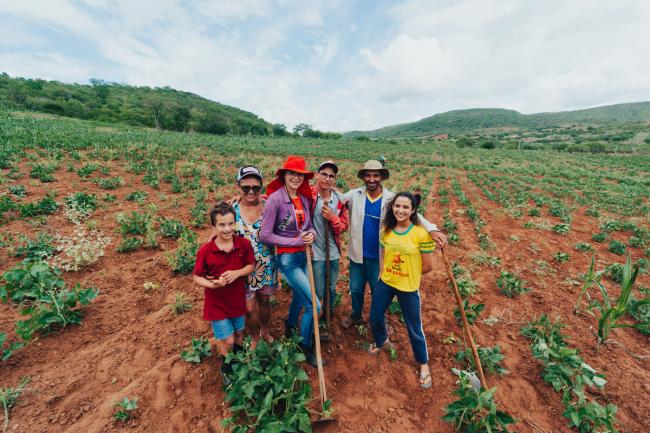 Born and raised in the community, Verônica has faced past dry periods during which the community couldn’t count upon the resources they have access to today. “The drought of the 1980s forced almost everyone to flee to the brejo. My father and a couple of old ladies were the only ones who stayed behind,” Verônica recalled. “Before, we used to plant everything by hand, [whereas] nowadays we have the planter and mixer. What used to take two days to do what we can now start at 7:00am and be finished by 10:00am,” she added.

Maria Lúcia da Silva Andrade Pereira, 34, from the neighboring municipality of Esperança, is also very happy with the changes towards “investing more in producing [our own] food, and not depending so much on buying things from the markets.” Maria Lúcia’s husband works as a stonemason and is the family’s main breadwinner. Maria Lúcia takes care of the house and her three daughters. She is also in charge of dry farming (when it rains) beans and corn and taking care of the sheep. She dreams of planting cilantro, chives, tomatoes, lettuce, cabbage, and strawberries in the garden bed that is being planted, as well as acerola, papaya, guava and pomegranate trees.

Maria Lúcia has two primary water cisterns with 16,000 liters each and a stone tank that she shares with her father-in-law, which is located on the boundary of the two properties. A new motor pump belonging to the community helps pull water from the tank to the cisterns much more efficiently than the old motor they used in the past ever did. Many communities have come together to collectively manage their resources, creating community seed banks which serve as strategic reserves; building cisterns, houses, silos, and clean clay pits; and organizing revolving solidarity funds, a way of collectively managing resources and supporting these processes with more autonomy and less dependence on the state.

“Resilience cannot be built on isolated initiatives alone, it is built by integrating these innovations: access to seeds, fodder, and earth, and increasing the fertility and food production levels of backyard gardens,” said AS-PTA member Marcelo Galassi. “Together, these can reduce the impact of drought.”

Maristela Crispim is Founder and editor-in-chief of Eco Nordeste. She is a journalist and holds a master's degree in Development and Environment from the Federal University of Ceará. She is part of the Earth Journalism Network and the Brazilian Environmental Journalism Network.