Francesca Lessa’s book follows the trials of perpetrators of The Condor Plan, the transnational network of state agents that used torture and violence against the Latin American left during the 1970s. 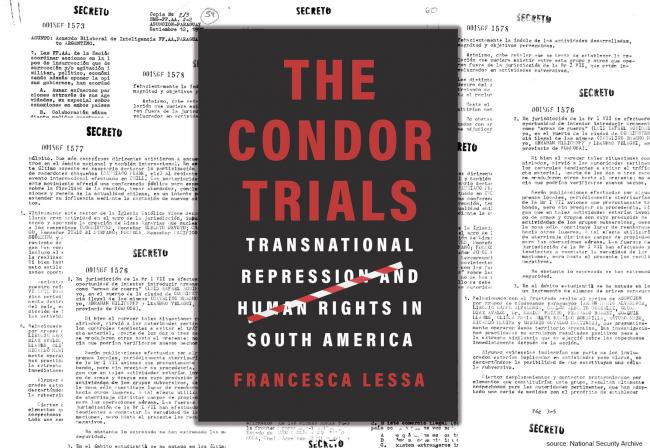 Uruguayan Sandro Alberto Soba was kidnapped with his leftist activist parents in 1976 when he was eight years old. Sandro, his parents, and his two siblings (ages three and six) fled to Buenos Aires after the 1973 military coup in their home country. But in March 1976, a military junta also took over the government in Argentina, and the country became the epicenter of Operation Condor, a scheme hatched by right-wing militaries across the Southern Cone to capture, imprison, torture, and kill leftist militants. Sandro’s family was taken to the clandestine Automotores Orletti detention center, a car dealership that had been rented by the Argentine military and turned into a torture complex. The children and their mother were eventually released, but their father and his comrades remain missing. In a 2006 interview, Sandro described the last few hours he spent with his father in detention as the longest of his life. “I keep replaying those two hours in my memory in an attempt to remember them,” he said. Francesca Lessa’s new book, The Condor Trials: Transnational Repression and Human Rights in South America, explores this and many other cases, some of which have finally led to criminal prosecution almost four decades later.

In the Southern Cone, Plan Condor was a U.S.-backed strategy to counter the spread of leftist ideas by attacking activists across six countries. Through coordination between governments, their respective intelligence agencies, and the FBI, the identification and targeting of left-wing activists went transnational. Its foundational act was signed in 1975 in Santiago by intelligence representatives from Argentina, Bolivia, Chile, Uruguay, and Paraguay, and Brazil later joined the agreement. Participating military powers exchanged valuable information about “subversives” in their countries, revealing their locations and identities. The aim was to eradicate any trace of leftist, communist, and Marxist ideology. During that time the U.S. government, through the CIA, also provided technology and expertise.

In The Condor Trials, Lessa describes the network created by Plan Condor across the region and follows its evolution throughout the 1970s. Her research, rooted in extensive fieldwork and interviews, trial ethnography, and archival research, documents the operation’s strategy and the role that it played in the destruction of the political and social fabric of the South American Left.  The Condor Trials show that Latin American dictatorships were not merely reacting to what they considered significant political threats to their power. Instead, they perpetrated a proactive and systematic plan to kidnap, torture, kill and disappear political, social, trade-union, and student activists, and with them, eradicate left political thought throughout the region. The methods used by Condor operatives included some of the most horrific tactics of state terror seen in recent history.

In her book, Lessa recounts—among many other examples—the story of Anatole, four years old, and Victoria, only 18 months. The two Uruguayan children appeared alone in a public square in Valparaiso, Chile, in December 1976. They had disappeared from Buenos Aires, 1,500 kilometers away, three months earlier. The reconstruction of their case reveals how Plan Condor was carried out and is an almost unbelievable story. The two children were kidnapped in Buenos Aires with their mother, Victoria Grisonas, who was a member of a left-wing Uruguayan political party. The Argentine military killed their father, Mario Roger Julien, and Grisonas and her children were taken to the Orletti torture center. Grisonas remains one of the many disappeared whose fate remains unknown to this day. After being kept in captivity until October 1976, the two children were sent to Montevideo and later abandoned in Valparaíso a few days before Christmas. In Chile, they were sent to an orphanage and later adopted by a Chilean family. The children’s biological grandmother eventually found them in 1979. In her book, Lessa describes how Anatole and Victoria finally achieved justice almost half a century after the events took place when a tribunal sentenced four civilian intelligence officers to life imprisonment on 11 counts, including the crimes committed against the two children.

The Orletti torture and detention center, where Anatole, Victoria, and their mother were detained, played a central role in Plan Condor. Automotores Orletti was leased by the SIDE Intelligence Agency In Buenos Aires in 1976.  It was used to imprison militants attempting to flee ideological repression in Bolivia, Chile, Peru, Paraguay, Brazil, and Uruguay. Only a few of the people kidnapped and taken to Orletti survived. Most were tortured, killed, and disappeared. A trial was eventually held investigating the many crimes that occurred in the Orletti center. The first indictments of the Orletti center crimes came from testimony provided in the 1985 Trial of the Juntas in Argentina, which remains the largest trial ever held after a dictatorship in Latin America.

The details of Plan Condor and human rights abuses under Latin American dictators were kept secret for years. During that time, these stories were preserved by the victims’ families and human rights organizations such as the Abuelas and Madres de Plaza de Mayo in Argentina. The slow return of democratic governments in the region has allowed these stories to be told more openly. The existence of Plan Condor was confirmed by the discovery of the Archivos del Terror, a series of documents that disclosed many of the crimes against humanity committed by the Paraguayan dictatorship under Stroessner.

Other information had been hidden in the archives of the United States government. In 2019, four decades after the events of Plan Condor, the United States finally shared almost 50,000 pages that revealed the role of the Pentagon and European governments in the Condor crimes. These documents allowed Italian courts to prosecute some perpetrators for crimes committed against Italian citizens. As a sign of how the role of the Argentine State has shifted since the restoration of democracy, Horacio Pietragalla Corti, the Human Rights Secretary from Argentina, even traveled to Rome to support the continuation of the proceedings. So far, 14 Uruguayans and Chileans have been sentenced in the Italian courts.

The Condor Trials helps us understand why human rights activists from Latin American countries see it as their duty to continue to fight for truth, memory, and justice for past events. The book provides a big picture, sharing individual stories that together create a collective narrative of how violence and crimes against humanity delineate contemporary identities in the region. It also outlines the relevance of these trials to the day; in Argentina, the country that led the trials, right-wing leaders have not ceased to push anti-democratic agendas.

Across the rest of Latin America, as political leaders from the Right and Left confront close elections—like in Chile, Colombia, and the upcoming elections in Brazil—human rights politics are at the center of the agenda. In this context, understanding the past —what happened during the Latin American coups—is crucial, not just for those who are still awaiting justice, but also to safeguard the rights of future generations. The Condor Trials contributes to that struggle to achieve an authentic never again.

Lucia Cholakian Herrera is a freelance reporter based in Buenos Aires. She covers human rights, politics, and gender in Latin America.