Peru: The Country of Failed Transitions

Peru’s latest political crisis is rooted in the failure of key transitions to consolidate democracy and basic social coexistence. 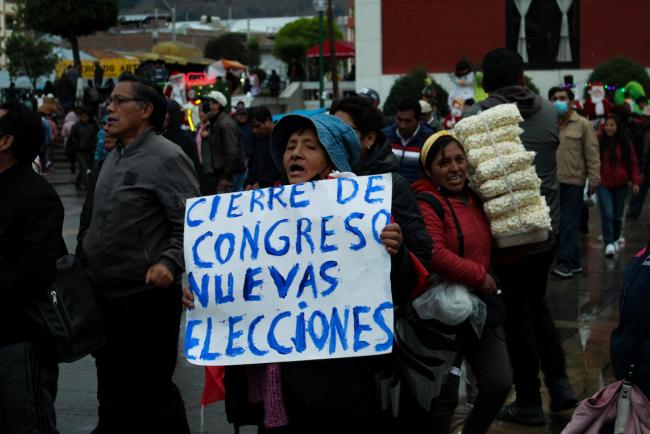 This article was originally published in Spanish by Revista Ideele.

Peru is the country of failed transitions. Governments calling themselves transitional are emerging in ever shorter lapses of time. Twenty years separated the transition from military rule to democracy in the early 1980s to the post-Fujimori transition in the early 2000s. Now, in the span of three years, there have already been two transition governments: Francisco Sagasti (2020- 2021) and the current administration of Dina Boluarte. Where have these transitions led us? Where is the current transition taking us? These are fundamental questions because we seem to repeat history over and over again. We navigate towards new democratic utopias while hiding our deep social fragmentation and our inability to see ourselves as equals or to imagine a collective project.

Today it is not clear what we are moving away from or where we are going. What are we overcoming? An attempted coup d'état that never took effect? A government that the opposition wanted to overthrow from the outset and that was willing to do anything to stay in power? And where are we headed if the “political reforms” proposed before new elections are simply bargaining chips between discredited congressional blocks? Many avoid delving into these issues because—as they argue—what matters is the stability provided by the current government. This is a government—they insist—that is legally constituted by a formal constitutional succession. And—they conclude—it is a government of technocrats that shows signs of reversing the scourge in public administration that the Castillo administration represented.

But it is not difficult to see that we are experiencing a firmly anti-democratic transition. We are governed by an informal coalition of the center and extreme right, with the support of the media, economic elites, and factions and politicians who never recognized the validity of the last election. They lament the deaths of 39 people in protests in one month, but, at the same time, they support the criminalization of citizen mobilization, the attacks on left-wing parties and social organizations, and the use of emergency decrees to deploy the military. Those who govern de facto today, with authoritarianism and repression, are the ones who were rejected at the polls.

After six years in which we have seen the rise of six presidents, two coups (one inaugurated a government that lasted one week; the other lasted one hour), several impeachments (one successful), two presidential resignations, and one dissolution of congress, it is not difficult to see that the crisis unfolding today is the result of a decadent political and constitutional system. It is not enough to say that the authoritarianism is due to the “precariousness of political parties” or “the lack of professional politicians.” We are past the point of stating the obvious. We are here because of the miserable failure of two transitions, not of governments but toward basic programs for social coexistence: the transition from authoritarianism to post-Fujimori democracy, and the transition from the internal armed conflict to a post-conflict society backed by the Truth, Justice and Reconciliation Commission (CVR in Spanish).

The post-Fujimori democratic transition led by Valentín Paniagua, who served as president for eight months after Fujimori stepped down, put the replacement of the 1993 Constitution on the agenda. The constitution had been born from a coup and legitimized by a referendum condemned as fraudulent. But this constitutional project did not materialize. Economic sectors that saw the constitution as locking in the free market fiercely opposed any attempt to replace it. The idea took hold that some reforms related to decentralization, transparency, citizen participation, and autonomy of electoral bodies would be enough to ensure the consolidation of democracy. However, the resulting democracy has been a democracy on paper only. Subsequent governments received campaign financing from corrupt companies and became more or less committed to mega-corruption through large-scale infrastructure projects. State capture was normalized.

At the same time, we have lived with a consistent number of social conflicts, mainly related to transnational investments in extractive industries. Few seem to notice that a salient feature of Peruvian democracy takes place at the margins of the state: active social mobilization, albeit fragmented and criminalized.

So while social and economic elites praised the professionalization of the public sector and technocratic governance, in the shadow of power systemic, white-collar corruption and popular discontent emerged. As a result of cases including Lava Jato, The Construction Club, and other corruption scandals, all the democratically elected post-Fujimori presidents (with the exception of Alan García, who committed suicide to avoid prosecution), as well as mayors and political leaders from various parties, were imprisoned or faced other restrictions on their freedom. Politicians, and the political system as a whole, lack legitimacy.

The failure of the post-conflict transition explains the extensive use, even from the highest levels of government, of “terruqueo,” the labelling of political opponents —often leftist, poor, and Indigenous—as terrorists, or terrucos.  The transition from the period of armed conflict to a period of post-conflict was supposed to have been consolidated through the implementation of the Commission on Truth and Reconciliation’s final report. But this has been systematically hampered by those who raise the specter of terrorism as a means of clinging to political relevance. Anyone who thinks differently, who mobilizes, is suspected of being a terrorist. The Left is branded as an ally of terrorism, human rights defenders are defenders of terrorists. The Indigenous Ashaninkas, who shed blood to defend the country against the Shining Path in the 1980s, are today called terrorists for mobilizing against the government in their traditional clothes. In political practice, the transitional justice agenda was not only archived, it has been desecrated over and over again with each newspaper headline and official pronouncement endorsing this type of low-intensity political violence.

The political system is decadent, among other reasons, because the constitutional rules for the distribution and control of power are outdated, serving only as political tools. Different actors—even from the same side of the ideological spectrum—have every incentive to abuse their power and impose a politics of patronage, delivering goods only to their loyal clients.  The anarchy of recent years is a symptom of the extreme situation in which we find ourselves. The most important point, therefore, is not simply that we have precarious institutions or bad politicians. It is that we have a systemic problem that the current constitutional framework cannot solve.

The tragic thing about this situation in Peru is that the way out seems more challenging than making ambitious legal reforms or even changing the constitution. The point of departure is to recognize that the political war also feeds off our social rupture, expressed in the fact that the most privileged sectors have the power to ignore, exclude, or even celebrate the pulverization of social actors considered dissidents. We have not consolidated democracy because we have not consolidated a plural coexistence, a basic social and political pact whose fundamental goal is to overcome indolent paternalism, daily classism, and internalized racism. This is because we continue to invent public enemies out of discontented citizens.

In this context, the current transitional government exemplifies Peru’s two truncated programmatic transitions: the democratic transition and the post-conflict transition. Not only are those who lost the elections governing today, but they are also persecuting those who won, both parties and social organizations. They persecute them with highly questionable legal mechanisms such as emergency decrees as well as with criminalizing speeches, labeling any dissent as terrorist. If the situation continues along this course, we could reach the point where the symbolic, implicit political violence and mostly localized repression becomes open, legalized, and generalized violence. Reconstructing the country from those fractures would be much more difficult.

Roger Merino is Associate Professor at the Universidad del Pacifico (Lima, Peru). He has published research articles on issues of political ecology, environmental governance, and human rights in Third World Quarterly, World Development, Global Environmental Politics, and Geopolitics, among others. He is author of Socio-Legal Struggles for Indigenous Delf-Determination in Latin America: Reimagining the Nation, Rebuilding the State (Routledge 2021).