Have You Heard, Comrade? The Socialist Revolution is Racist Too.

In response to recent protests in Cuba, progressive organizations that promote anti-racism and social justice expressed support for the Cuban government, disregarding the experiences of Black Cubans. 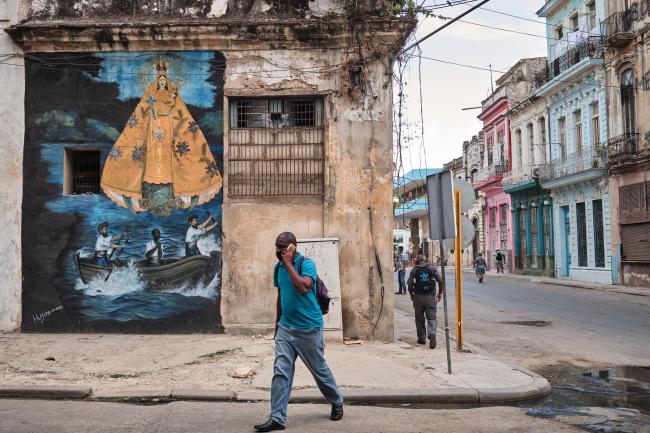 Juan Fernando is 31, Cuban, Black, and a stevedore at the Havana Port, in that order, as he would point out. On the morning of July 11, Juan received videos through WhatsApp and Facebook showing some sort of revolt in San Antonio de los Baños, a town to the southeast of Havana in the western Artemisa Province.

Juan quickly dismissed the videos and didn’t think much of it. After all, during the last months Cuba has seen unprecedented demonstrations of mass, public dissent. The San Isidro Movement, #27N, and individual displays of frustration with the system across the island have challenged the state’s official message of social consensus and support to the Party.

As Juan says, “nothing ever changes, so why think too much about it?”

But Juan was wrong. Nothing like this has ever happened in Revolutionary Cuba.

The protest in San Antonio quickly spread around the country. Palma Soriano, Camaguey, Holguin, Matanzas, Havana, and dozens of other towns experienced mass protests that day. Cubans were angry with omnipresent power cuts, shortages of medicine, food, and everything else imaginable, and frustrated with the government’s response to the Covid-19 pandemic. So they took to the streets to demand what they have been denied.

Until that mass protest, the Cuban people’s legitimate needs were usually dismissed using the opposing viewpoints—wholehearted support or absolute rejection of the Cuban government—that dominate both Cuba’s domestic public discourse and the island’s relationship with the United States. Particularly, the experiences of Black Cubans like Juan have been overlooked, as U.S.-centric political debates once again take precedent over the reality on the island.

Many of the protestors openly asked for “libertad”—liberty. This was not a simple rebellion of hungry Cubans. Suddenly, the prospect of change became thinkable, reachable.

Around 3:30 p.m. on July 11, Juan was trying to reach his father for one of their regular WhatsApp calls. He noticed a disruption to his data service. Everyone who uses the internet in Cuba expects them. So, he tried again to call his father, who left Cuba for Florida in 1994 on an improvised raft with at least six other people. He ended up in the Dominican Republic.

“When they cut internet access, we know something is happening. It is an immediate red flag,” said Adiel, 38, Juan’s neighbor in the Jesus Maria neighborhood in Old Havana. Adiel is another Black Cuban in an area of Havana that tourists don’t usually see.

“When they block the internet, it reminds me of that American song, ‘The Revolution Will Not Be Televised.’ Only here it is always presented as a counterrevolution. Either way, the alleged counterrevolution will not be televised; they always make sure of it,” says Adiel, who works in a social science research center in Havana. “I have no doubts that the anger, legitimate dissatisfaction, and cry for freedom of many in Cuba will be dismissed as the acts of thugs, criminals, and counterrevolutionaries, and will simply not be televised. It cannot be; for those in power, the revolution is in danger.”

Quickly after the images of the protests circulated through social media that day, President Diaz-Canel appeared on national television to tell the country what he saw during a staged visit to San Antonio earlier in the morning: the revolution was under attack, Diaz-Canel told the Cuban people, with mercenaries and delinquents attacking the country. The president of Cuba gave an order to “fight” and called the “revolutionaries” to come out to the streets to face this new epic challenge.

There was not a mea culpa or an exercise of self-awareness and empathy. The president’s view was not one of a country demanding change or freedom. He showed the system’s desperate addiction to survival.

The result: the national police, state security agents in plain clothes, and the Boinas Negras or Avispas Negras (Black Berets or Black Wasps), an elite special force that is as scary as it sounds, unleashed a crushing wave of violence. The crackdown was ruthless. 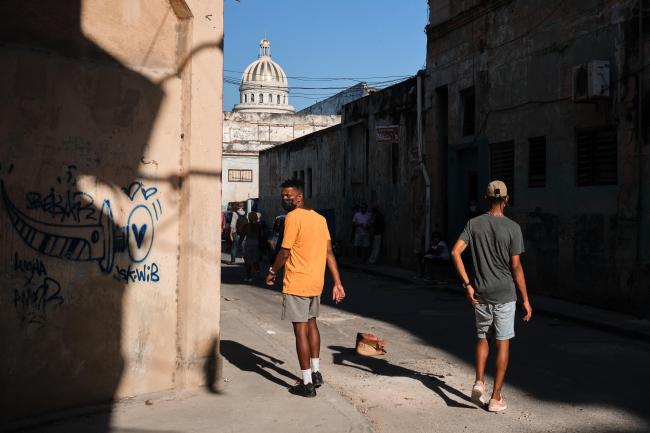 The Global Left and the Imperialism Dilemma

Unfortunately, the lack of empathy that the leadership in Havana demonstrated for the struggles of most Cuban people was replicated by prominent members of the progressive movement such as Black Lives Matter (BLM). In a statement, BLM wrote “The people of Cuba are being punished by the U.S. government because the country has maintained its commitment to sovereignty and self-determination. United States leaders have tried to crush this revolution for decades.”

It is as if the problems and lives of people in Cuba exist only to support a self-fulfilling narrative of anti-imperialism. This statement strips Cubans of any agency over their problems and achievements.

It did not matter that Black Cubans were at the forefront of these protests nor that the repression fell heavier on Black families. BLM condemned U.S. imperialism in a moment when that was not the central issue and Cuban people on the ground needed moral support.

The Cuban government’s strategic position in the international fight against the U.S. empire mattered more than the many Black lives at risk. However, racial inequities in Cuba would make even the most color-blind person in America uncomfortable. According to recent research, over two thirds of black and mixed-race Cubans are still without internet access, while white Cubans control 98% of businesses, receive 78% of private financing for entrepreneurs, and are five times more likely than Black Cubans to have a bank account.

After the BLM statement, Professor Danielle Clealand, a Political Scientist at UT Austin who wrote a book about racial relations in Cuba, tweeted: “I’m very disappointed that @Blklivesmatter put out such an uninformed statement regarding Cuba…particularly when it silences so many Black Cubans who have been protesting and putting themselves at risk who consider BLM to be part of them and their movement too.”

BLM then faced additional criticism for their uninformed statement. In response, the Black Alliance for Peace, tweeted that “BLM was attacked for taking a principled position against U.S. policies on Cuba.” Suddenly, the Cuban people and what matters to them were no longer at the center of the discussion. The Black Alliance for Peace went further and declared that “they stand with Black Lives Matter on Cuba.” Again, no mention or support for the people in Cuba who are fighting for the same things they’re fighting for in the United States. Many people in the U.S. Left avoid debate about human rights in Cuba, fearing that right-wing pundits will use their statements against them in domestic political fights. This is lazy politics. Acknowledging the nuances of the situation—and the culpability of the Cuban government—doesn’t mean ignoring the wrongdoings of U.S. foreign policy. Nuance allows people’s voices to be heard even when it is not politically convenient.

U.S. intervention in Cuba, whether in the form of culturally subversive actions or a military intervention, should not be part of the solution. There is enough space to defend that position and simultaneously be direct when critiquing the Cuban authorities. More importantly, rejecting America’s potential interference should not be synonymous with abandoning activists and protestors on the ground.

In a moment when Black lives are at risk, preserving the structure of power that governs those Black lives cannot be more important simply because it is strategically well-positioned in the fight against the U.S. empire. Overlooking the racism of the Cuban government in the name of the continental struggle against U.S. imperialism makes no sense. If a government in power puts Black lives in danger, I hope to see BLM and others stand against it.

The U.S. Left uses terms like Global South, oppressed working-class, colonized people, U.S. ruling class, and socialism, hoping that those big words will carry the weight of their moral endeavor. Those of us who are the oppressed working-class in the actual Global South—colonized people building the socialist project that others like to brag about—feel lonely when our natural allies prioritize domestic political fights instead of showing basic moral support.

After the government’s repression in Cuba, a prominent member of the Black Alliance for Peace, with a straight face claimed that, “The revolution has nothing to be ashamed of.” 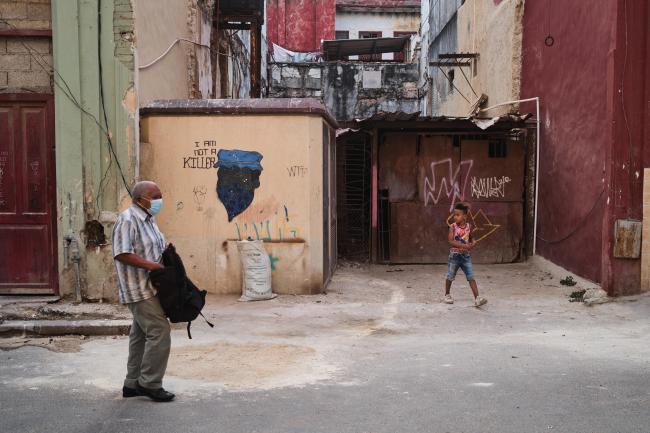 The U.S. Left, who speak out against a system that they consider unjust and oppressive, should at least recognize the irony that people living in Cuba, where anti-imperialism and Marxism are official ideologies of the state, are not even guaranteed the right to dissent.

Those in the U.S. Left should also know that the Cuban government takes advantage of U.S. leftists’ passion for anti-imperialism to perpetuate itself in power. Almost every government institution in Cuba has been created and empowered to preserve the status quo. The conservatism behind the Communist Party is worth examining. The so-called revolution, led by the Communist Party, became the most conservative force in Cuban society. Outside observers must understand how a beautiful social project, still loved by many today, can simultaneously be racist and homophobic.

Cuban authorities displayed an uncommon disdain for life on July 11. Not uncommon in its occurrence but in its magnitude. That brutal repression used to be reserved for small dissident groups. In the past, it wasn’t necessary to shoot and kill someone in the streets of Havana. The pervasive culture of fear and prosecution that assassinated people’s individuality was enough to quash dissent.

For now, the protests have died down, but the need for solidarity is no less urgent. Many of the protestors, including minors, are being prosecuted without due process, and some were detained in undisclosed locations for more than 72 hours. The majority of them are Black.

Those on the Left truly concerned about the Cuban people and racism, they would do well to listen to those of us who live with the day-to-day reality of a system that has failed to fulfill its aspirations.

For the Cuban authorities, dialogue is not an option. But the status quo is not an option for most Cubans either, so we must assume that the events of July 11 will repeat themselves. A nuanced debate that acknowledges the complexity and root causes of the problems is essential to supporting and increasing the visibility of Cuban activists. After July 11, Cubans on the island and in diaspora, as well as their allies and supporters in America’s political spectrum should unify their voices and support Cubans’ right to protest without persecution.