Human rights activists and social movements have rallied behind the Cáceres family as David Castillo stands trial in Tegucigalpa. 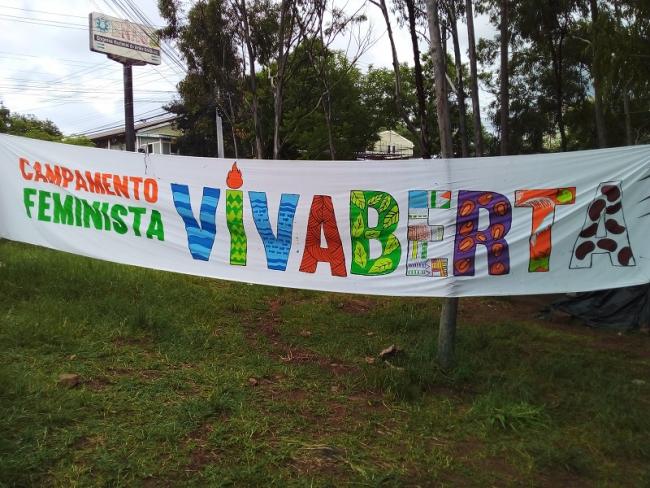 The air is jubilant, almost festive, as dozens of diverse people move between the tents and “Justice for Berta” banners strung on trees in a grassy strip alongside a Tegucigalpa highway turnoff. The sky is quickly turning grey, and everyone is busy, hoping to finish their work before the rain comes.

For three months, the Long Live Berta Feminist Camp has been a space of sharing, debate, and reflection while across the street in the Supreme Court David Castillo, a military intelligence officer, and former general manager of the Desarollos Energeticos (DESA) hydroelectric company, stands trial for the murder of the slain Indigenous Lenca activist and organizer Berta Cáceres.

“It’s a reclaimed space,” says Yessica Trinidad, National Coordinator of the Network of Women Human Rights Defenders, one of the organizations that set up the Feminist Camp at the onset of the trial. “Berta continues to be a woman who convokes, who invites, who inspires communities to do all that we have done through this territorial recuperation.”

Since the trial against Castillo began on April 6, thousands of people from across the country have passed through the Feminist Camp. Some have pitched a tent for weeks while others have passed through for a cup of steaming herbal tea boiled over the open fire. They came to support Berta’s surviving family members and the members of her organization, the Civic Council of Popular and Indigenous Organizations of Honduras (COPINH). The trial against Castillo has brought renewed attention to the case. In a country where murders of Indigenous rights defenders are barely noticed, much less investigated, Berta Cáceres’ case represents an opportunity to expose the truth behind how extractive companies operate through illicit structures at the cost of impacted communities defending their rights. A guilty verdict on Monday, July 5 would be meaningful for victims of extractive violence throughout the country.

“We thought it was going to last two weeks, three weeks at the most,” Trinidad says of the Feminist Camp, which was envisioned to last until Bertha Zúniga, one of Cáceres’s daughters, testified against the man accused of orchestrating and overseeing the murder of her mother five years ago, "So that she would be accompanied by her people, her friends, sisters, companions.”

Zúniga took to the stand as the final witness for the private accusation representing the victims on June 15. She affirmed that her mom and COPINH faced a fierce defamation campaign for leading the struggle against the Agua Zarca project. She said just months before the murder, Berta sat her children down to talk about what they would do if she were murdered.

After Zúniga testified, Trinidad says they saw the need to stay. “It is important to be here with the people from the communities who are defending their territories every day. There is a lot of strength, a lot of rebellion, creativity.”

The camp, with the additional support of COPINH , which Berta co-founded and led at the time of her murder, and the Black Fraternal Organization of Honduras (OFRANEH), has been a reprieve for the family during the grueling trial, including hearings that lasted 16 hours and on weekends.

Days after the hearings ended on June 28, the 12-year anniversary of the U.S.-backed coup d’état, Bertha paints tires while her sister Laura sits in a circle ceremony in the middle of the camp with Garifuna elders. Everyone is anxious for the verdict. 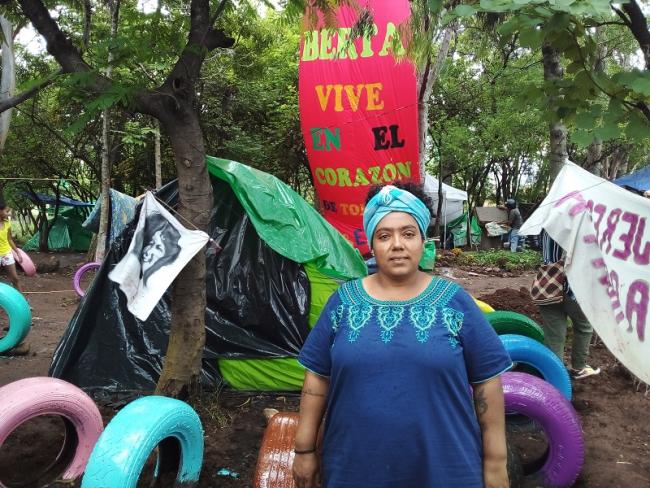 Isolated Inside the Courtroom, but Supported Outside

The second youngest of four, Laura was designated the family representative inside the courtroom after Covid-19 precautions restricted broader observation. “I enter alone with David Castillo's mother,” she says. “We are the only people who can enter, each on their own side.”

In a 2018 trial against DESA managers and the hit squad that carried out the murder, the family of Berta Cáceres was barred from participating. This time, they have actively participated in the trial through their private lawyers.

“You are less protected by the community but at the same time, they see you,” says Zúniga. “That humanizes it. Even though I am alone in the hearing, there are a lot of people accompanying us and that is, and should be, part of the process. This is good.”

Through the course of close to 50 days of hearings, state and private prosecutors representing the victims of the crime–the daughters, son, and mother of Berta Cáceres–presented evidence to show the crucial role of Castillo, a West Point trained engineer with intelligence training, in planning and carrying out the murder on March 2, 2016.

The family’s lawyer argued that the murder of Berta Cáceres has its roots in the constitution of the DESA company in 2009, the subsequent operating licenses and contract negotiated through acts of corruption between the company and the state for the Agua Zarca hydroelectric project on the Gualcarque River in 2010.

Rosalina Domínguez, Ancestral Authority in the Indigenous Council of Rio Blanco, and a close companion of Berta Cáceres, was a witness for the public prosecutor. She testified that DESA never had the free, prior, and informed consent of the affected communities to move forward with the hydroelectric project on the sacred Gualcarque River. When the Lenca communities defended their territorial rights, including the “Toma del Roble”–a permanent sit-in to protest the project–they were victims of violence, threats, and intimidation. These aggressions were not investigated by the state even after being denounced.

“Spiritually, the river moves us to fight, to defend it, because it is there that we find strength,” said Domínguez. “The water gives all of us who surround it life.”

Domínguez testified that vigilante groups supported by the company have destroyed subsistence crops. Evidence in the trial showed how the company is implicated in other acts of criminalization and violent attacks. Dominguez also spoke of the murder of community leader Tomás García by military forces outside the DESA work site in Rio Blanco the day before Chinese dam construction company Synohydro announced it was pulling out of the project. Héctor Mejía, a paid informant for DESA who was called to testify by the lawyers representing the Cáceres family, affirmed that people in the area in favor of the project were affiliated with the company.

In closing statements, the family’s lawyers noted that David Castillo, who in 2009-2010 was the de facto President of DESA while also being a state representative of the National Electric Energy Company, is being prosecuted for a second, parallel case. The “Fraud on the Gualcarque” case demonstrates illegalities and acts of corruption both in the procedure of procuring the licenses needed to operate the hydroelectric project on the Gualcarque River and the negotiation of power purchase agreement and is expected to go to trial later this month.

“He is not a successful businessman,” said Laura in her victim impact statement on the final day of hearings, asking for the court to convict Castillo. “He is a criminal.”

Much of the trial was spent presenting evidence of how Castillo coordinated a long campaign of vigilance, harassment, and threats against Berta Cáceres in her capacity as general coordinator of COPINH, after she started accompanying the Indigenous Lenca communities in resistance to the implementation the hydroelectric project in 2013.

Castillo has rebuked the allegations, claiming a friendship with Cáceres. But witnesses Indyra Mendoza and Melisa Cardoza, friends and colleagues of Berta who are part of the national human rights movement, testified that she felt afraid of Castillo and worried about how he was using his intelligence training against her.

Likewise, state expert witnesses showed that while the attacks that Domínguez spoke of were happening at a local level, Castillo was communicating with Cáceres regularly to monitor her actions. According to state telecommunications expert Brenda Barahona, Castillo’s tactics were in line with his military intelligence background, including seeking information and offering gifts to build trust, but not reciprocating exchanges of information.

Text messages presented as evidence showed that DESA executives from the powerful Atala Zablah family were assumed to be in touch with Minister of Security Julian Pacheco shortly after the murder. They were confident that the crime would be considered a crime of passion.

In a wiretap audio presented as evidence, Castillo calls DESA Executive and major shareholder Jacobo Zablahto tell him about the arrest of DESA community relations manager Sergio Rodriguez two months after the murder.

“It can’t be, it can’t be,” says the distraught Atala. “Now they’ve sunk us completely.”

Renewed Pressure on the Elite Implicated in Berta’s Murder

Much of the key telecommunications evidence presented during the trial has been in the hands of the Honduran state for years and was used in the 2018 trial which led to the conviction of former DESA employees, an active military official, and four hitmen who carried out the murder. But the live broadcast of the Castillo trial and the work of COPINH to analyze and widely disseminate information caused strong social media reactions. International experts called for further investigations of directors of the Atala Zablah family, ministers, and state institutions for illegal acts leading up to and following the murder.

On the last day of presenting evidence, defense witness Shaun Vodde, an American telecommunications expert participating via Zoom, shared previously unheard audios and videos that he was able to extract from Cáceres’s phone. In them, she denounced DESA and the militarization of Rio Blanco which countered the defense theory that threats Berta received came from other actors.

Earlier that day, Vodde confirmed that he had received directions for carrying out his report from Daniel Atala Medince, DESA CFO, after an email between the two was accidentally shown on the Zoom screen. In May, Atala Medince was called to testify by the private prosecutors of the family of Berta Cáceres. This was the first time anyone from the powerful Atala Zablah family, which controls the shares and board of directors of the DESA company, has been called to testify regarding the murder. Once on the stand, he evoked his constitutional right to not testify against himself, affirming that he is under investigation for the murder. To date, no members of the board of directors have been prosecuted for the murder.

Trinidad points to the campaign in the courtroom to paint a warped image of Cáceres and how the emblematic case, not only for Honduras but the entire region, was largely censored by corporate media in Hondura.

“They want to sell us their truth, but our truth is having Berta present, knowing the integrity she had as a woman,” Trinidad says. “No one can throughout away that image from us, the people who walked with her in defense of this country.”

Meanwhile the family of Berta Cáceres remains vigilant and COPINH and Rio Negro continue to demand justice. “We are the ones who are there listening to the process, we are watching,” says Laura.

Jackie McVicar has accompanied social and Indigenous Rights movements in Central America for the past 15 years and has worked closely on the Berta Cáceres case through the Expert Observer Mission.