Distortion and Subversion: Punk Rock Music and the Protests for Free Public Transportation in Brazil (Review)

Rodrigo Lopes de Barros’ book serves as a guide for the Brazilian underground youth movements around the turn of the century, both in their political and cultural dimensions. 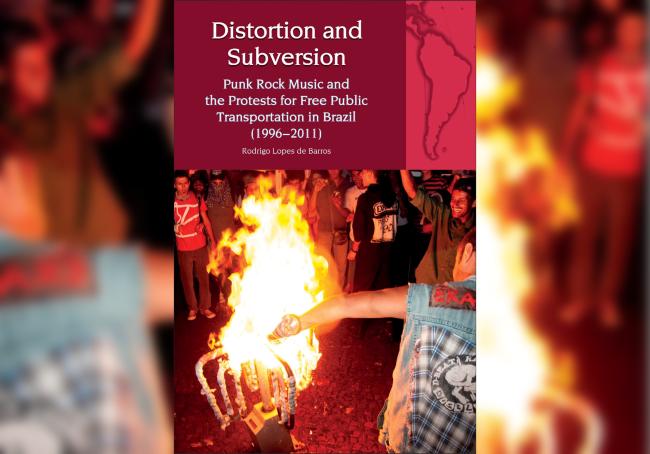 It’s 2003, and my friends and I are cruising along the few paved streets of Jequié, in the interior of the state of Bahia, by skateboard. Our uncombed curly and afro hair hangs loose, and “gringo” rock band t-shirts flutter in the wind generated by the movement of our small wheels. Jequié has a population of some 150,000 inhabitants–the eighth largest in the state of Bahia–and this is how we get around a city with a terrible public transport system.

Underground rock, skateboarding, papers on Marxism, and Errico Malatesta’s revolutionary texts were the topics we discussed on the internet—something new for many of us. These influences marked more than my social circle as a teenager; a generation of Brazilians accessed radical and “new” ideas through Internet Relay Chat (IRC), Myspace, and underground blogs. I was not present in Salvador, Bahia’s capital city, during the epic Bus Revolt, Revolta do Buzu. But the news that for three weeks between August and September 2003, thousands of students occupied the streets and stopped traffic in an autonomous, decentralized, and horizontal movement against the increase in bus fares provoked feelings of hope and change. Fares had been raised as the result of pressure from private companies that monopolized the transport market as a way of passing on to the population the burden of rising gasoline prices due to inflation between 2000 and 2006. Protesters organized to oppose fare hikes, gain easier access to student discounts, and call for service improvements, and the Revolt became a political landmark for a generation of youth activism in Bahia and Brazil.

When I moved from the countryside to Bahia’s capital city of Salvador in 2004 to attend the Federal University of Bahia (UFBA), I tapped into a widespread network of young activists confronting deteriorating public services. Between 2005 and 2007, I participated in several youth demonstrations as a member of the Luiza Mahin Academic Center, the history student union of the UFBA. The Salvador Bus Revolt inspired the creation of the Brazilian Free Fare movement in Florianópolis, a horizontal and politically autonomous youth movement that further inspired urban youth activism in cities across Brazil.

Rodrigo Lopes de Barros 's book Distortion and Subversion: Punk Rock Music and the Protests for Free Public Transportation in Brazil (1996-2011) transports us to these teenage memories of the early 2000s. The characters, places, and texts excavated by Lopes de Barros on punk rock music and the fight for public transportation in Brazil are all too familiar. Rescuing them from the ostracized archives of abandoned websites, Lopes de Barros takes on the challenging enterprise of reconstructing this history in order to better understand contemporary Brazilian activism. A generation like myself that was politicized in the protests against bus fare increases in the early 2000s—through classic documentaries like “Revolta do Buzu” by Carlos Pronzato, fanzines, and hardcore and punk rock concerts—will read Lopes de Barros' work with a strong affective dimension.

But this book also can be appreciated in a less nostalgic mode by the general public. It serves as a guide for the Brazilian underground around the turn of the century, both in its political dimension—movements, protests, and leadership—and cultural iterations. In its pages we find a vast universe of punk and hardcore bands, both extinct and active, and visit places where these shows happened and, in some cases, still happen. Lopes de Barros' digital archival research and narrative will especially please rock lovers interested in hardcore and punk music.

As an account of an essential chapter in recent Brazilian urban history, this book also serves activists campaigning for free public transport and urban reform in Brazil and Latin America. A fundamental part of Brazilian political activism has focused on analyzing urban impacts and advocating for improvements in public transport both within Brazil and in the wider region. This work can help us map the different stages of political struggle for basic public services and infrastructure.

Academically, Lopes de Barros’ book contributes to debates on urbanization and the organization of public transport in large Brazilian and Latin American cities. The way in which Lopes de Barros integrates youth protest, music, and urban culture is innovative in the field of urban studies. Reflections on urban transport and struggles to improve the quality of these services are linked to anti-capitalist forms of social imagination. Public transit allows the population to access the city and transcend the socially implied boundaries of Latin American urban centers. Without material obstacles to accessing a city, people can expand their sociability networks and experience cities in a less compartmentalized and restricted way, seeing the urban landscape in a more expansive sense.

Furthermore, youth studies have a stake in how youth policy can be informed by underground youth cultures more generally. For example, young Brazilians used hardcore and punk concerts to raise funds for political activities linked to the free fare movement. The punk culture of “Do it Yourself” served as a source of inspiration for Brazilian youth seeking political experience and the space to create their own political practices. Music that contributes to the construction of specific youth identities can also be a fertile space for crafting political solutions across different social contexts. Youth identities lend a different perspective on problems of public infrastructure. The rebel ideas expressed on the soundtrack for transportation struggles helped the youth street protest be more horizontal, autonomous, and direct-action based.

Distortion and Subversion is a creative experiment. The author captivates the reader’s interest while providing an accurate and engaging analysis of recent events in Brazil’s urban history. Lopes de Barros’s powerful narrative is comparable to the potency of the punk music he analyzes. Some of his phrases, such as "Music transports ideas to bodies, buses transport bodies to ideas," could be accompanied by the fast and dissonant chords in a hardcore song.

Some of Lopes de Barros’ methodological contributions, such as digital archeology, may serve as inspiration for other studies that use as sources data produced in the early phase of the internet. Lopes de Barros’ use of cyber-archeology helps us understand the shifting relationship between the internet and social movements.

This text also serves to reveal a more complex image of Brazil, showing us a rich underworld in which Brazil is more than “samba country.” The author explores questions about race, class, and modernity through the noisy phenomenon of Brazilian punk subcultures. This analysis goes beyond the hegemonic imagery of Rio de Janeiro, which has monopolized the representation of Brazil in English-language media and scholarship. Scholarly works in English are often centered on Samba, popular culture, Brazilian Native cultures, the Vargas Dictatorship, and Bossa Nova. This book talks about another Brazil: urban, dissatisfied, noisy, rebellious, and politically creative.

Lopes de Barros’s work shows how a generation of Brazilians used what they found "outside" to produce original political results. The cultural circularity between the Global South and North can be seen in the emergence of mobilizations such as the free fare movement. The punk culture born in the Global North is appropriated, with the aim of providing political responses to specific conditions, creating new movements by young people in the Global South.

The narrative of Distortion and Subversion is structured into five chapters. In the first chapter, Lopes de Barros introduces the protests surrounding the struggle for quality and accessible public transportation up until the Turnstile Revolt, a massive protest against the increase in urban bus fares, and the creation of the Free Fare Movement in Florianópolis in 2004 and 2005. He links the origin of the Free Fare Movement to the punk rock scenes of São Paulo and Florianópolis, connected by the early commercial internet: IRC (Internet Relay Chat), Orkut (a virtual social network), and the messaging application ICQ (a pun for “I Seek You”), which was popular among young people in the 90s and 2000s, among others.

In the second chapter, the author analyzes the roots of the 2003 Bus Revolt in Salvador, highlighting the role of anarcho-punks and the punk movement in the revolt. He identifies characteristics of the youth riot that materialized years later in the Free Fare Movement: the young age of the protesters, the lack of clear leadership, decisions made through horizontality and consensual processes, decentralization, and a refusal to adapt the political model of the Student Unions movement, made up of organizations that fought against the dictatorship and became an important space for youth activities of leftist parties.

The following chapter portrays the landscape of political battles organized by activists from the Campaign for Free Fares and later the Free Fare Movement in the city of Florianópolis. The day-to-day of this political practice is shown through long and short-term tactics that ranged from direct actions against administrative buildings to the organization of hardcore music festivals.

The fourth chapter addresses the punk and anti-capitalist carnivals organized in Brazil since the early 2000s, and the idea of the “carnivalization of life” as a form of political protest fostered in the 2003 Bus Revolt in Salvador. For Lopes de Barros, sectors of the Brazilian underground, including anarchists and non-orthodox Marxists, were initially critical of Carnival which they saw as a celebration of Brazil’s (mythical) racial harmony controlled by the capitalist cultural industry. After the Free Fare Movement, these groups took advantage of Carnival as a space to reinvigorate forms of carnival protest.

In the last chapter, Lopes de Barros focuses on the networks linking the hardcore/punk music scene of São Paulo and struggles against fare hikes and for free public transportation. He documents protests against the fare hikes up to 2011, detailing how these protests preceded the massive events of June 2013, when millions took to the streets of Brazil to oppose increases in bus, train, and metro ticket prices. The mobilization expanded to include other issues such as the denunciation of corruption in the federal government, police brutality, and Dilma Rousseff’s leftist government. Rescuing those protests from the shadows of history, Lopes de Barros traces ongoing connections with the punk movement, which helped to make the 2013 demonstrations possible.

In fact, as Lopes de Barros demonstrates, the Free Fare Movement and the hardcore/punk scene were likely dissatisfied with the right-wing detour taken by the demonstrations that started in June of 2013. The protests originally organized against the price of bus tickets in São Paulo eventually became co-opted by far-right movements that instigated a coup against Dilma Roussef in 2016, opening the door to the highly conservative government of Jair Bolsonaro.

Dissonates chords, guitar distortions, and protests against increasing bus fares helped create a political culture involving political activists, artists, and social researchers. The Free Fare Movement proposals became a reality in 2015, when Maricá, a medium-sized city in the state of Rio de Janeiro, introduced free fares on public transport in the city. Washington Quaquá, the mayor at that time and a member of the Workers' Party, was responsible for introducing the free fare policy. Today, free public bus transit is a reality in at least forty-three Brazilian cities, according to data from the National Association of Urban Transport Companies, a potent example of how the free fare agenda took root in the Brazilian Left, influencing lives far beyond the underground.

I believe that Rodrigo Lopes de Barros's book, which aroused so many nostalgic feelings in me, can provoke in readers the desire for better public transport in Brazil and beyond, and hope for a world without turnstiles.

Caio Fernandes Barbosa has a Ph.D in History from the Federal University of Bahia and is a teacher at the Bahia State Department of Education. Twitter: @Caiobarbo