Territories of Extreme Violence in Ecuador’s War on Drugs 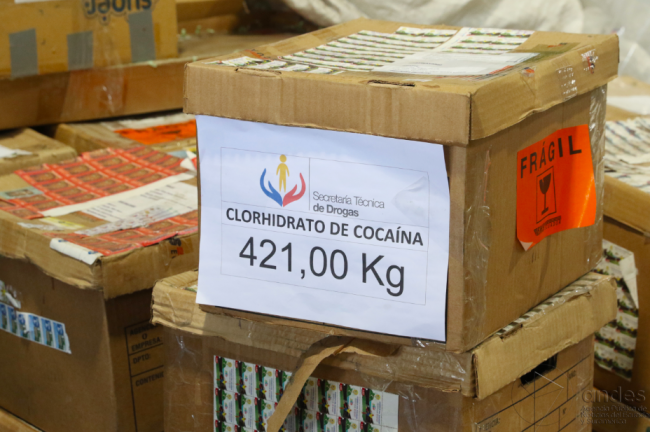 2021 was the bloodiest year in Ecuador’s prison history. Four massacres in three different supermax penitentiaries took the lives of over 320 inmates in Cuenca, Latacunga, and Guayaquil. Forensic reports revealed dozens of beheadings and hundreds of mutilated bodies. After the riots, body parts and corpses were found scattered in hallways, courtyards, and cell blocks. The exact number of deaths was still unknown months after the mass killings.

In the wake of these massacres, Ecuadorian human rights organizations have reported serious problems with the forensic human identification process, and journalists and scholars have decried the lack of official information and government accountability. Back in May 2019, the government declared a crisis in the prison system, deployed military troops to maximum-security penitentiaries across the country, and replaced public servants with police personnel. In the following years, a series of “state of exception” executive orders gave way to further militarization of prisons and cities.

Yet the official narrative characterizes these massacres as the result of a war between gangs working for Mexican cartels. According to the National Police, narco-organizations have taken control over Ecuadorian penitentiaries and are managing the drug business from behind bars. President Guillermo Lasso has also mobilized the gang war hypothesis to explain the latest surge in homicides and crime in large and medium-size cities, particularly in poor neighborhoods. The visual violence has been instrumental in advancing this narrative among the public. Gory mobile phone videos filmed by inmates during the massacres and circulated on social media showed gruesome scenes: a heart in the hands of a laughing prisoner, a beheaded body lying on top of a pile of burnt corpses, a stripped-naked inmate being murdered in a prison yard, and other disturbing images of cruelty and torture. In February 2022, two bodies were left hanging from a pedestrian bridge in Durán, outside the port city Guayaquil, and the following day a decapitated head was thrown at a port entrance in Puerto Bolivar.

Looking at the work of crime intelligence within Ecuadorian supermax prisons since 2015 helps complicate the official narrative, which is problematic at various levels. First, the cartel war theory puts the blame on prisoners and suggests narco-violence is exterior to Ecuador. Second, it neglects the multiple and diverse international crime networks coordinating cocaine smuggling routes. Third, it hides the prominent role of state agencies in reorganizing local cocaine markets.

Indeed, crime intelligence oriented around what the Ecuadorian police characterize as a “territory in dispute” has led in recent years to the emergence of an ultraviolent transactional space for cocaine interdiction and trade. This exchange of crime intelligence for prison privileges grew into a feedback loop between the formation of prison gangs and the metrics of police success, specifically the number of cocaine seizures. I focus on Ecuadorian cocaine markets because, according to official numbers given to the press, cocaine hydrochloride represents 82.5 percent of all anti-narcotic operations, followed by marihuana with 15.7 percent, and cocaine base with 1.5 percent. Heroine interdiction only accounts for 0.3 percent of police seizures.

Ecuador did not have supermax prisons before 2014. Now the country has three of them—precisely the prisons where the 2021 killings happened. With a total investment of $200 million, these infrastructures were equipped with up-to-date surveillance technologies and embedded in a novel criminal justice framework that included the creation of bureaucracies via the Ministry of Justice and the privatization of prison services, such as food providers. While I don’t have space here to go over the prison reform’s failure, I will highlight one significant innovation in prison governance introduced by reformers: the centralization of inmate transfers.

Until 2014, the relocation of prisoners from one detention center to another was subjected to intense dialogues between inmates and prison wardens. Each penitentiary was able to block an inmate’s transfer for various reasons, including criminal profiles or bed space capacity. Ecuadorian prisons had and continue to have different modalities of carceral “real estate.” In the 1990s, cells were informally owned by inmates, and beds were bought and sold or rented in commercial markets run by prison syndicates. The widespread commodification of prison space had the blessing of authorities through unspoken forms of corruption, even if it meant an inability to classify incarcerated populations according to offense or imprisonment status.

In 2015, only a year into the prison reform implementation, the National Police set up a crime intelligence unit, informally known as the “outworld office”—ultramundo in Spanish, which makes explicit reference to an outer world that can be linked to clandestine activities or alien and unknown worlds. This unit was put in place with five low- and mid-rank officers, whose job was basically to recruit informants among inmate populations to keep prison violence under control and generate crime intelligence. The information they gathered was related mostly to anti-narcotics investigations and cocaine seizures.

By 2020, there were over 50 police officers working full-time on prison intelligence across the country. They did not receive any formal training and operated without a clear legal framework. The instant messaging application WhatsApp was the most common communication channel between intelligence operatives and prison informants. Tapping into a history of mobile phones in prisons—including as tools of entrepreneurial prison economies—dating to the early 2000s, allowing an inmate to have a phone was police officers’ most frequent recruitment approach.

In addition to mobile phones, anti-narcotics intelligence transactions included concessions with regards to inmate transfers. What began as occasional recommendations to shuffle inmates between wings and different prisons soon developed into a carceral classification scheme based on direct negotiations between the “outworld office” and its human intelligence sources. These informants, often relatively powerful inmates, took advantage of such privileges to self-segregate into cell blocks and gain more power among inmates.

When the massacres took place last year, all three supermax penitentiaries where they happened were organized around this concept of crime intelligence and a paradoxical logic of exchange that juxtaposed the interests of drug trafficking and anti-narcotics policing. The paradox lies in how, through intelligence operations, prison gangs help destroy the market in order to become relevant in the cocaine business, and simultaneously, the police allow the growth of organized crime within penitentiaries in order to dismantle the cocaine market. This became a ticking bomb that, by 2022, wound up transferring the entire prison administration to the Ecuadorian National Police when President Lasso appointed a police general as chief director of the national prison management system at the end of last year.

In this context, one phrase has come to be repeated ad nauseum by police and mass media since the massacres: the “fight for territory.” Almost any violent death on the news is reported as part of a bloody feud for territory, from gory public killings to contract murders known as sicariatos. According to police officials, 80 percent of homicides in the country are related to disputes over cocaine commercialization, and most recently, connections have been made between cocaine seizures and violent clashes between drug trafficking groups inside and outside prisons. In 2021 alone, the country registered over 1,800 murders, similar to historic record-highs seen only in the most violent times in Ecuador.

In police parlance, the term territory refers to a chaotic space yet to be regulated and controlled, a zone of abandonment and unrest. A prison, a neighborhood, a port, or a city can be seen as a territory or as part of a territory. Territory is a spatial conceptualization of security and surveillance in a country with a militarized and centralized police structure. Territory is also a way of imagining the cocaine market as an edge space.

Police, and the state by implication, know that abstract notions like supply and demand make little sense in commercial territories declared illegal. Cocaine markets are made of unstable associations and temporal connections. As an exit hub for cocaine destined for the U.S. and Europe, Ecuador is a zone of encounter for international commercial transactions in cocaine that also feeds a growing local consumption. Political economists have characterized Ecuador as a “transit” country, although some claim production has gained terrain.

As a transshipment point, Ecuador’s cocaine markets function as what scholar Michel Callon conceptualizes as a platform where value is generated mainly through logistics and match-making. Cocaine is the main product of a market with an increasing variety of services attached to it. This is why empowering prison gangs in exchange for anti-narcotics intelligence is counterproductive. It just incentivizes the proliferation of new paid logistical services, such as secured storage, which is exactly what inmate-informants have told the police. Although using prison intelligence to seize cocaine shipments increases police success rates, it also pushes the market toward innovation and violence.

In this light, Ecuador’s war on drugs is a war against a market understood as territory. The state can attempt to transform that territory, depopulate it, or even close it down, but it can never erase it from the economic map. Ecuador is a frontier space for cocaine commerce connected to a global market in the making. The main problem with the current iteration of Ecuador’s anti-narcotics strategy is its negative effects and damaging consequences. A prison intelligence approach to the cocaine business makes the market brutally violent and turns entire neighborhoods into carceral spaces governed by a predatory logic of interdiction.

The culture of suspicion and revenge that we, as a society, are now forced to live in did not develop in a void. The government needs to recognize the role of the state in the production of extreme violence to reorient both its prison policy and drug strategy. At this moment, a major concern should be how to stop the exchange of crime intelligence and prison privileges between police and inmates.

Jorge Núñez is codirector and cofounder of Kaleidos and a visitor at the Institute for Advanced Study in Princeton, where he is working on a book manuscript tentatively entitled Markets of excitement: Ordinary speculations in times of austerity. As an anthropologist, he has conducted ethnographic research on banking and finance in Southern Europe and prisons, cocaine markets, and the war on drugs in Latin America. He is the lead designer of the digital platform EthnoData.