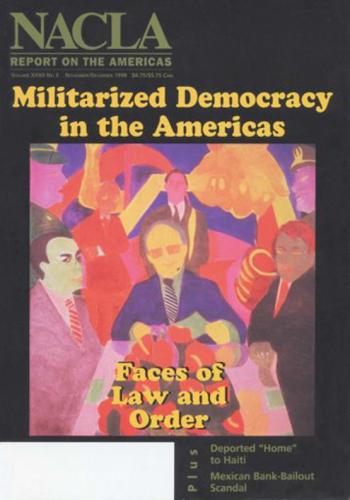 As the countries of the Americas slip deeper into an economic model of growth and development that exacerbates inequality and social disorganization, the region's elected civilian governments are turning to a variety of military-style options to keep the lid on growing social disorder—including higher crime rates—and social discontent. Civilian leaders have been turning to the armed forces to take on a number of non-military tasks, militarizing domestic safety and intelligence and actively tolerating violent paramilitary behavior. This has produced a kind of militarized democracy throughout the Americas, and that is the subject of this Report.

Remembering the Revolution
Pierre LaRamée
It is often remarked that history is written by the victors. As we approach the millenium, history's current victors are busy portraying all struggles for social justice and economic equity as misguided enterprises at best, or more often, demogogic misadventures.

Militarized Democracy in the Americas: Faces of Law and Order
NACLA
As the countries of the Americas slip deeper into an economic model of growth and development that exacerbates inequality and social disorganization, the region's elected civilian governments are turning to a variety of military-style options to keep the lid on growing social disorder-including higher crime rates-and social discontent. Civilian leaders have been turning to the armed forces to take on a number of non- military tasks, militarizing domestic safety and intelligence and actively tolerating violent paramilitary behavior.

Street Gangs: A LETTER FROM SARA MEZA ROMERO
Sara Meza Romero
In my capacity as a chaplain at a local county hospital, I recently had occasion to accompany a farnily from Mexico as they mourned the slow death of a young man who was for them brother, son, father and husband. Police in our community quickly attributed the brutal murder to raging gang rivalries between a faction of Los Angeles' notorious Eighteenth Street gang and another local gang, but the veracity of this claim has never been established.

Deported "Home" to Haiti
Donna DeCesare
On the second day of his return to Haiti––after living 11 years in the United States––22-year-old Patrick Etienne is overcome with emotion. The silent rivulets streaking his cheeks and staining his clean white T-shirt, however, are not tears of joy.
The $55 Billion Bank-Bailout Scandal
Fred Rosen
"It's nothing special," says the over-fed, weasely cartoon banker, explaining the enormous unpayable debt owed to the Mexican banks. "It's about selfloans, loans between bankers, credits to a host companies, credits to companies of the same bank..."

A Military-Paramilitary: Alliance Besieges Colombia
Ricardo Vargas Meza
Every 15 days, residents of Solano, a small city in the jungles of southern Colombia, watch an army plane take off from a nearby air base and bomb the outskirts of town. The air attacks are part of a anti-drug operation that has been in place since rind1997.
Continuing Military Power in Guatemala
Rachel Garst
When Guatemalan Bishop Juan Gerardi was found lying in a pool of blood this past April, his face beaten in with a piece of concrete, the crime scene quickly became a zoo. As the house filled with onlookers, investigators from the National Civilian Police and the Public Ministry walked through the blood and passed the apparent murder weapon from hand to hand.
Deadly Force:Security and Insecurity in Rio.
Steven Dudley
Surrounded by lush green mountains on one side and the light blue ocean on the other, the neighborhood of São Conrado in Rio de Janeiro is home to the most expensive real estate in Brazil. The mayor of Rio, the governor of the state, and many of Brazil's elite have luxury apartments here overlooking the white sandy beaches.
Militarizing the Border Patrol
Carol Nagenast
On the evening of September 27, 1998, Border Patrol agents shot and killed a man who was attempting to cross the U.S.-Mexico border near San Ysidro, California. According to the federal agents at the scene, the victim and two other men ran from the immigration officers on the U.S. side of the border.
The Emergence of "Guardian Democracy"
J. Patrice McSherry
Despite the transitions from direct military rule in Latin America and the emergence of market democracies in nearly every country, many governments, in the face of the economic hardship and social dislocations caused by neoliberal restructuring, have adopted authoritarian measures and bolstered the state’s capacity for repression. Many of the region's new democracies remain marked by institutional legacies of military rule and persistant guardianship by military forces.

Book Review Essay: Dispatches From a Vanishing Frontier by Geoffrey O'Connor
Erica G. Polakoff
This is a highly personal account of a filmmaker's journey into the Amazon to record the gold mining rush and its effects on the region.

Pinochet's Arrest Threatens "Consensus Politics" In Chile
Latin American Weekly Report
SANTIAGO DE CHILE—The arrest of former Chilean dictator Augusto Pinochet in London on October 17 has been hailed as signalling the end of impunity for the perpetrators of state terrorism. Before it actually means that, Pinuchet would have to be brought to trial, a development which is by no means certain.

Washington's Addiction to the War on Drugs
Peter Zirnite
When Republican Congressional leaders intro- duced a S2.6 billion drug-war proposal July this year, including S300 million for the construction of a U.