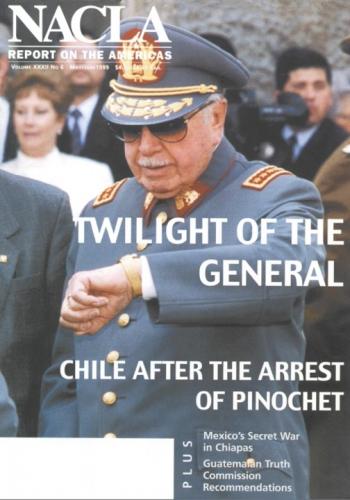 When General Augusto Pinochet was arrested in London last October at the behest of the tenacious Spanish judge, Baltasar Garzón, the event was greeted with a mix of jubilation and consternation on a world scale. The General now sits imprisoned in a rented London villa, his fate subject—for the first time in 25 years—to forces completely beyond his control. Yet at this hour of his greatest defeat, he has once again imposed himself on the stage of Chilean politics and redefined the principal issues facing the country. This NACLA Report examines this current delicate moment.

Time for a U.S. Truth Commission
Jo-Marie Burt
This past February, the UN Commission for Historical Clarification published an extensive report on human rights violations committed during the course of Guatemala's 36-year civil war. It documented, in clear and precise language, the central role of the Guatemalan army in the violence, and named army policy for what it was: genocide.

Twilight of the General: Chile After the Arrest of Pinochet
NACLA
When General Augusto Pinochet was arrested in London last October at the behest of the tenacious Spanish judge, Baltasar Garzón, the event was greeted with a mix of jubilation and consternation on a world scale. Human rights advocates and the families of the General's victims were naturally jubilant and hopeful that the unexpected turn of events would set a new precedent for international justice.

Rigoberta's Testimonio
Roger N. Lancaster
Two recent news items on Guatemala have made headlines in North American papers. One is the publication of the report of the UN Commission for Historical Clarification, which found the Guatemalan army overwhelmingly responsible for the political massacres that left some 200,000 Mayans dead or missing in the course of that country's 36-year civil war.

Mexico's Secret War
Luis Hernández Navarro
In considering the current status of the conflict in southeastern Mexico, four fundamental realities must be kept in mind. First, despite the contrary claims of the Mexican government, there is a war in the state of Chiapas.

Cross-Border Terrorism: Operation Condor
J. Patrice McSherry
Baltasar Garzón, the Spanish judge who requested the arrest of Pinochet while he was visiting a London clinic, is spearheading an investigation of a shadowy Latin American military network created in the 1970s called Operation Condor.[1] Through Condor, associated Southern Cone militaries shared intelligence on political opponents—and seized, tortured and executed them—in cooperation with one another.
Declassifying U.S. Intervention in Chile
Peter Kornbluh
"In the United States, as you know, we are sympathetic with what you are trying to do here," then Secretary of State Henry Kissinger privately confided to the Chilean dictator, General Augusto Pinochet, in June 1976. At the height of the military regime's repression, according to a recently declassified memorandum of conversation, Kissinger told Pinochet that the junta was "a victim of all left-wing groups around the world" and that Washington "wishes you well."
Pinochet's Heirs: The Fractured Chilean Right
Steven Volk
For Chilean conservatives, limping along the road to a third consecutive defeat in presidential politics, Pinochet's arrest in London on October 16 struck like a double dose of Viagra. After more than a decade of squabbles about the future of the right, conservatives again stood tall and united in protection of the past.
The Arrest and its Aftermath
Tomas Moulian
Almost every year, Augusto Pinochet feels an overwhelming compulsion to visit London. The symptoms include the craving to have tea with the admired Baroness Thatcher and the desire to buy fine things at Harrods and to stay in elegant hotels.
The Chicago Boys Come Home
Alejandro Reuss
In their efforts to sell privatization and deregulation in the United States, conservatives have found inspiration in the free-market extremism of the Chilean military dictatorship. "If Texas were Chile," reads the conclusion of a 1992 book, If Texas Were Chile: A Primer on Bank Reform, "there would be no Federal Deposit Insurance Corporation, no Federal Savings and Loan Insurance Corporation, no Resolution Trust Corporation for bailing out its financial system.
The Pinochet Precedent: Changing the Equation of Repression
Reed Brody
The October arrest of General Augusto Pinochet in Britain for having ordered thousands of murders and disappearances in Chile is destined to change the equation of political repression, regardless of the final result of Pinochet's legal appeals. The subsequent race by European countries to try the General shows how far we have come from the days when tyrants could terrorize their own populations, secure in the knowledge that at worst they would face a tranquil exile on some foreign golf course.
Voting For Nobody in Chile's New Democracy
Alfredo Riquelme
In December 1997, parliamentary elections were held in Chile to renew the entire Chamber of Deputies and half the elected seats in the Senate. These elections brought to light a disquieting trend: A growing number of citizens were opting not to exercise their right to vote.
Women on the Right
Margaret Power
On December 9, 1998, British Minister of the Interior Jack Straw ruled that General Pinochet could be extradited to Spain to stand trial on charges of murder, terrorism and genocide. By late that afternoon, a crowd of Pinochet supporters, outraged at Straw's decision, had gathered at the Alcántara metro stop in the upscale Santiago neighborhood of Las Condes.

Document: UN Guatemala Recommendations
On February 25, the UN Commission for Historical Clarification (CEH) published its final report. The CEH, cre- ated by the 1996 Oslo Accords signed between the Guatemalan government and the Guatemalan National Revolutionary Unity (URNG), was designed to document the nature and scope of violence and human rights violations during Guatemala's 36-year internal war In the March/April 1999 issue, NACILA reproduced some of the key findings of the CEH.

Militarizing U.S. Internal Security
J. Patrice McSherry
WASHINGTON, D.C.—In a January 1999 interview that drew little public attention, President Clinton stated that, as part of a major buildup in counterterror defenses, he was considering a Pentagon proposal to establish a commander for the defense of the continental United States.