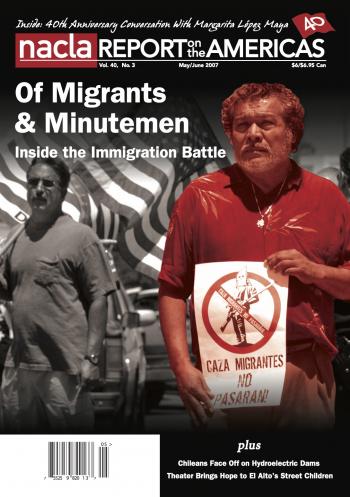 The last time NACLA devoted a report to immigration (“Welcome to America: The Immigration Backlash,” November/December 1995), we noted: “The roots of the backlash are essentially twofold: economic uncertainty and uneasiness about the country’s changing demographics.” While the themes of economic fear and nativism persist, today’s immigration battle is powerfully conditioned by two new factors: a boom in immigration, largely from Mexico, and the post-9/11 securitization of U.S. society. 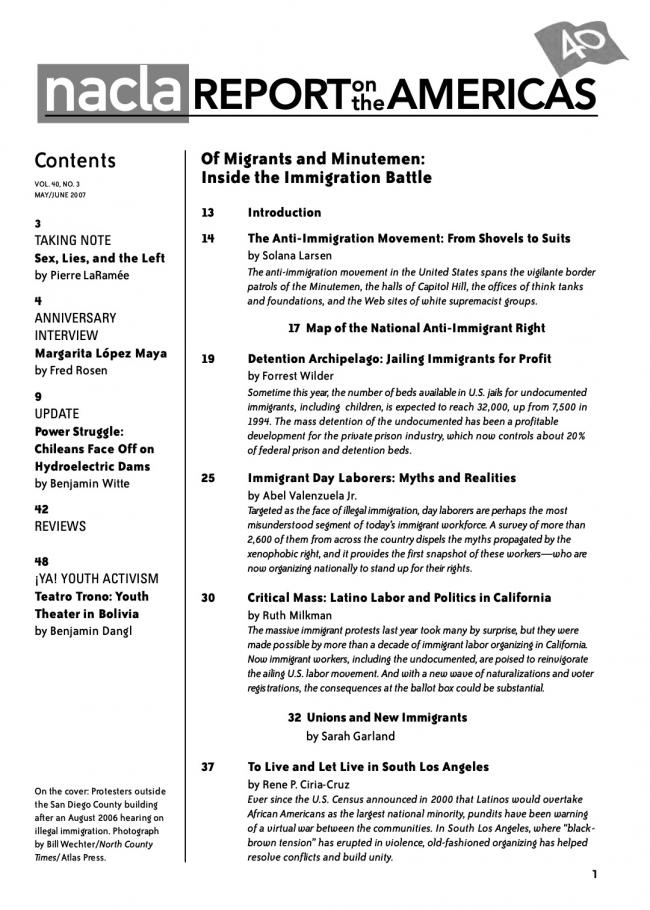 Sex, Lies, and the Left
Pierre LaRamée
The Nicaraguan legislature’s rescinding of the country’s therapeutic abortion law last December, with the support of the Sandinista bench, underlines a frequent observation made by leaders of the feminist movement: that the left has at best a complex, ambivalent relationship with women’s rights and empowerment.

Introduction - Of Migrants and Minutemen: Inside the Immigration Battle
NACLA
The last time NACLA devoted a report to immigration (“Welcome to America: The Immigration Backlash,” November/December 1995), we noted: “The roots of the backlash are essentially twofold: economic uncertainty and uneasiness about the country’s changing demographics.” While the themes of economic fear and nativism persist, today’s immigration battle is powerfully conditioned by two new factors: a boom in immigration, largely from Mexico, and the post-9/11 securitization of U.S. society.

Power Struggle: Chileans Face Off on Hydroelectric Dams
Benjamin Witte
In early 2004, Argentina began restricting the flow of natural gas it sends to Chile. The cuts have tended to be most severe during the cold winter months, when Argentina’s domestic demand is highest and gas suppliers, therefore, have less to export.

Critical Mass: Latino Labor and Politics in California
Ruth Milkman
Last year’s massive immigrant rights marches heralded the emergence of a new civil rights movement in the United States. But while this wave of popular protest heartened the progressive community, it also sparked a considerable backlash. The U.S. Bureau of Immigration and Customs Enforcement (ICE) has stepped up its workplace raids and deportations of undocumented immigrants in recent months, while also intensifying its efforts to police the border.
Detention Archipelago: Jailing Immigrants for Profit
Forrest Wilder
Sometime this year, the number of beds available in U.S. jails for undocumented immigrants, including children, is expected to reach 32,000, up from 7,500 in 1994. The mass detention of the undocumented has been a profitable development for the private prison industry, which now controls about 20% of federal prison and detention beds.
Immigrant Day Laborers: Myths and Realities
Abel Valenzuela Jr.
Since at least the 1990s, immigration has been an emotional, hot-button issue, with pundits, elected officials, and think tanks like the Center for Immigration Studies mounting a growing anti-immigrant campaign. Their spin often relies on shoddy research and rhetorical arguments that present immigration as simple, ahistorical, and unconnected to broader structural forces. In its battle against “illegals,” the anti-immigrant right has unleashed not only cowboy justice along the U.S.-Mexico border, but also urban protests at worker centers and home improvement stores where mostly immigrant men gather in search of work. Groups like Save Our State, the Federation for American Immigration Reform, and the Minutemen have targeted these day laborers as the face of undocumented immigration, blaming an easy target.
The Anti-Immigration Movement: From Shovels to Suits
Solana Larsen
As millions of immigrants and their supporters took to the streets last year, the anti-immigration movement mobilized its own forces. The number of state and local anti-immigration groups in the United States has exploded, growing by 600% in the last two years. In 2005, there were fewer than 40 groups; today, there are more than 250.
To Live and Let Live in South Los Angeles
Rene P. Ciria-Cruz
Ever since the U.S. Census announced in 2000 that Latinos would overtake African Americans as the largest national minority, pundits have been warning of a virtual war between the communities. In South Los Angeles, where “black-brown tension” has erupted in violence, old-fashioned organizing has helped resolve conflicts and build unity.
Unions and New Immigrants
Sarah Garland
Most U.S. labor unions agree on what to do about the some 12 million undocumented immigrants now living in the United States: Legalize their status. But sharp disagreements remain on the question of new immigrants, and the fault line lies mostly between unions in the Change to Win (CTW) coalition and the AFL-CIO.

Briefly Noted
NACLA
Latino L.A., by Enrique and Gilda Ochoa; Horizontalism, by Marina Sitrin; and Communities Without Borders, by David Bacon.
The Take, A film by Avi Lewis and Naomi Klein
Christine Whitney
The film tells the story of what it calls “the largest sovereign debt default in history” through Freddy Espinosa, a worker at Forja San Martin, an auto-parts factory on the outskirts of greater Buenos Aires. Like countless Argentines, Espinosa is left jobless after his factory closes. But rather than despairing, Espinosa launches “the take,” embarking on a quest to expropriate Forja and begin production anew under worker supervision, with the help of his co-workers and an organization called the National Movement of Recovered Companies.
There's No Jose Here, by Gabriel Thompson
Pablo Morales
The quintessential city of immigrants, New York, has seen in the last 15 years a massive influx of Mexican immigrant workers, mostly from the city and surrounding areas of Puebla. Go to delis or restaurants throughout the city; take a livery cab in Brooklyn or Queens; or pass by an apartment building under renovation, and their systematic absorption into the local service economy is immediately obvious. But despite their prominence, they remain somehow invisible, perhaps in particular to yuppie technocrats, who are also migrating to this and other global cities in droves.

Breaking with the Past: A 40th Anniversary Conversation with Margarita López Maya
Fred Rosen
One of Venezuela’s most prominent left intellectuals, Margarita López Maya is a historian at the Center for Development Studies at the Central University of Venezuela. She has written extensively on popular protest in Latin America, the region’s new political actors, and Venezuela’s current socio-political transition.

Teatro Trono: Youth Theater in Bolivia
Benjamin Dangl
At Teatro Trono, located in El Alto, a sprawling city neighboring La Paz, homeless children are the actors, and the plays deal head on with Bolivia’s harsh reality. Indeed, such themes aren’t distant from daily life in this working-class city, where state repression against protesters has been common, and the question of nationalizing Bolivian natural resources still divides the population.