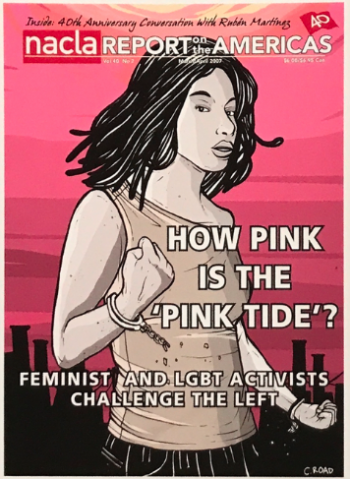 Many are speculating about the true colors of Latin America’s much-heralded “pink tide.” Just how close to socialist “red” are the region’s new left-leaning governments? This Report approaches the question from a different angle: Do the new governments promote the rights of women and lesbian, gay, bisexual and transgender (LGBT) people, who are often associated with the color pink? We take a critical look at the opportunities and obstacles that Latin America’s shifting political context presents to Latin Americans who challenge sexism, homo- and transphobia, and their intersection with class and ethnic/racial exclusion. Without providing easy answers, the contributors to this issue—including journalists, academics and activists from Argentina, Bolivia, Brazil, Chile, Nicaragua, Uruguay and Venezuela—analyze the potential for change in the new environment.

Fighting for the Life of the Independent Press
Christy Thornton
In early January, the Independent Press Association, a nonprofit organization based in San Francisco, quietly announced via e-mail to its members that it was ceasing operations, effective immediately. The news had already broken on the Internet, thanks to a former IPA staffer, but it would take a week before everyone confirmed the rumor that was circulating in independent publishing and media activism circles: The IPA was dead.

Introduction: How Pink is the 'Pink Tide'?
Elisabeth Jay Friedman
Many are speculating about the true colors of Latin America’s much-heralded “pink tide.” Just how close to socialist “red” are the region’s new left-leaning governments? This Report approaches the question from a different angle: Do the new governments promote the rights of women and lesbian, gay, bisexual and transgender (LGBT) people, who are often associated with the color pink?

Farewell, Meatbag: On the Death of Pinochet
Pedro Lemebel
And so it happened, just like that. the swollen dictator croaked, and the generals, secret-service types, cadets and all the military pomp ran amok through Santiago’s upper-class neighborhoods, beating their chests with bricks as they mourned the noisy death of the Chilean ogre.

Mexico: Year Zero
Fred Rosen
For Felipe Calderón, the second president of Mexico to come from the conservative National Action Party, this is year zero for his governance of Mexico from the hard right. Elected in a disputed, polarizing process with just 35% of the popular vote, unrecognized as Mexico’s legitimate president by his principal opponent, he has chosen, despite his soft-spoken manner, to rule with an iron fist.

Beyond Polarization: Organized Venezuelan Women Promote Their Minimum Agenda
Gioconda Espina
There are women in Venezuela who form what Cathy Rakowski and I have called a “core group.” This is a small group of activists that at crucial times is part of larger mobilizations, and in between those times is “in abeyance,” waiting for political opportunities to act. This core group of activists who have been participating on and off in Venezuelan political life since 1936 is not made of stone.

Black Brazilian Women and the Lula Administration
Vilma Reis
After more than 30 years, with the arrival in January 2003 of the Luiz Inácio “Lula” Da Silva administration, the fight for racial and gender equality that took to the streets and intervened in the national policy agenda beginning in the 1980s now faces limits imposed, in part, by institutionalized racism. This racism takes the form of a lack of understanding of the strategic meaning of confronting racism and sexism as a fundamental step in development.
Bolivian Women’s Organizations in the MAS Era
Karin Monasterios P.
Throughout the 1990s, the Bolivian women’s movement was ideologically polarized between a liberal, NGO-based “gender technocracy” and the anarcha-feminism embodied in the Mujeres Creando (Women Creating) movement. Between them stood the great majority of the country’s female population—a huge contingent of women of indigenous descent living in a colonized condition. Neither the technocratic nor the anarchist tendency considered them the subject of political representation.
Chilean Feminism and Social Democracy From the Democratic Transition to Bachelet
Marcela Ríos Tobar
The election of Chile’s first female president in January 2006 sparked unprecedented interest in the developments of gender relations and women’s political roles in the country. Many observers, including the mass media, emphasized the paradox that the election of Michelle Bachelet posed in what was perceived to be one of Latin America’s most conservative countries.
Dangerous Liaisons: Latin American Feminists and the Left
Verónica Gago
Leftist politics has always had a complex relationship with women’s struggles, one that many times translates into political exploitation and neutralization. More complex still is the condition of women “within” the left itself, where, because of the absence of organizational autonomy, the figure of the (obedient) “partner of the male political leader” and women’s role as the logistical and organizational—but silenced—mainstay of political movements abound.
Resisting Kirchner’s Recipe (Sometimes): ‘LGBTTTI’ Organizing in Argentina
Alejandra Sardá
The links between some “LGBTTTI” groups and left-wing parties (mostly communist and Trotskyist), as well as the more mainstream human rights movement, have been very strong since the gay and lesbian movement began in the late 1960s.

Briefly Noted
NACLA
Being Indian in Hueyapan, by Judith Friedlander; Another Arabesque by John Tofik Karam; and Dissident Women, Speed, Hernández Castillo and Stephen, eds.
CUBA REPRESENT! By Sujatha Fernandes
Christy Thornton
Because autonomous political organizing is proscribed, the arts have become an important location for critical analyses of the Cuban situation. At the same time, because the economic foundations of the Revolution have seriously eroded, the Cuban state has sought new ways to define the revolutionary project and “reincorporate and reintegrate” the Cuban people into the state through selectively supporting artistic projects and institutionalizing “underground” or previously unorganized groups of artists.
The Devil Behind the Mirror by Stephen Gregory
Pablo Morales
In the 1990s, in that window between the Soviet collapse and the September 11 attacks, national borders seemed to be withering away. The rise of the Internet, the increasingly broad diffusion of digital media, cheap airline tickets—space-time compression appeared to be accelerating. And so one spoke increasingly of fluid boundaries, deterritorialized identities and “transmigrants” who occupied a kind of postmodern hyperspace. And of all the migrants in this dawning era of transnationalism, none were more paradigmatic than the Dominicans. Frequently hopscotching back and forth between the United States and home, Dominican transmigrants—bilingual and bicultural—were seen to embody this new phenomenon.

The Migrants Will be Heard: A 40th Anniversary Conversation with Rubén Martínez
Deidre McFadyen
A Los Angeles native of Mexican and Salvadoran descent, Rubén Martínez is one of the United States’ most trenchant writers on immigration and the migrant experience.

Youth Media: Building Solidarity
Pablo Morales
Dozens upon dozens of young people lie sprawled across the floor of the Caracas airport. Despite the fluorescent glare, most are asleep. It is August 2005, and 15,000 of them from 144 countries have come to attend the World Youth Conference. Hours peel by without any sign of rides to their accommodations. “I love being here,” an exhausted young man from the U.S. says, “but this is not the perfect welcome.”