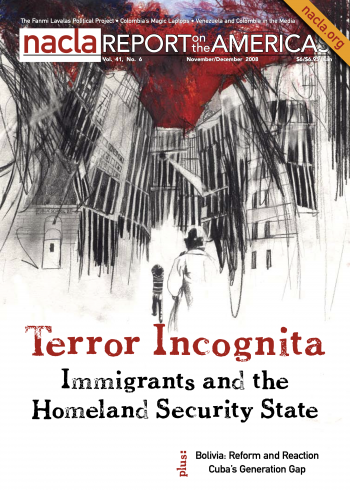 This Report explores the new domestic “security environment” as it relates to Latin American migrant communities—from the courtroom to the detainment center to borderlands to the media to the urban enclave.

Colombia’s Magic Laptops
Daniel Denvir
Since the Colombian government bombed a guerrilla camp on Ecuadoran soil on March 1, it has orchestrated a highly effective media campaign backed by material allegedly found on laptops belonging to a high-ranking member of the Revolutionary Armed Forces of Colombia (FARC). The laptops were used almost immediately after the raid to implicate both the Ecuadoran and Venezuelan governments in drug-trafficking and “terrorist” connections to the FARC. A NACLA investigation sponsored by the Samuel Chavkin Investigative Fund finds that Colombia’s media campaign has been based on dubious evidence at best, and that the “magic laptops” are being used to deflect criticism of Colombia’s violation of Ecuadoran sovereignty, distract the public from a domestic political scandal, and justify the government’s policy of total war against the FARC.
Cuba’s Generation Gap
Michelle Chase
Cuba has been in the news almost constantly this year, as foreign observers have scrutinized the recent round of reforms, reported on the activities of island dissidents, and speculated on the plans of the new president, Raúl Castro. But what ordinary Cubans think has often been lost in the media shuffle. In particular, with all the talk about a “transition” in Cuba, the island’s youths—ostensibly the protagonists of their country’s future—have escaped serious analysis.

Building the Homeland Security State
Roberto Lovato
The U.S. government’s huge new Immigration and Customs Enforcement agency (ICE) was established to battle a new kind of domestic enemy, undocumented immigration. Yet the creation of ICE was not so much motivated by a perceived need to enforce migration policy as by a desire to build up the domestic security apparatus.
Barricading the Border
Joseph Nevins and Timothy Dunn
The Secure Fence Act of 2006 ordered the building of 850 miles of at least two layers of “reinforced fencing” along the U.S.-Mexico boundary. The utility of these barriers, as obstructions to unauthorized immigration, is questionable. But as part of a much larger project aimed at presenting border enforcement as a key component of national security, they are highly significant.
Conflict of a Different Sort
Joseph Nevins and Timothy Dunn
A New Migration Policy: Producing Felons for Profit
Renee Feltz
Immigration officials have teamed up with the Department of Justice, federal judges, and the nation’s largest private prison company to merge immigration and criminal policy. Many undocumented immigrants now face jail time pending their immigration hearing in civil court. The resulting surge in prosecutions is staggering: About 60,000 immigrants will face charges in fiscal year 2008.
The Gentle Way of Detainment
Gabriela Reardon
Panic Attack: Sex and Terror in the Homeland
Roger N. Lancaster
In U.S. culture, fear of sexual predation has become a key social metaphor for menace in general. The victim crying out for vengeance now stands center stage in the national political drama, resulting in the creation of punitive laws directed against perceived and imagined threats, including undocumented immigrants—all by popular demand.
Containing Multitudes: Death, Destruction, and Rebirth in Brooklyn
Forrest Hylton
When in 2006 the media trumpeted the heavily Latino neighborhood of Bushwick, Brooklyn, as the city’s “next hot spot,” it was already old news for artists, hipsters, and the real estate industry. The urban planning of the 1970s proposed that “sick neighborhoods” be starved of public services so that they might die a natural death and then be reborn, attracting the right kind of middle-class “demographic.”

Colombia and Venezuela: Testing the Propaganda Model
Kevin Young
U.S. news coverage of parallel political events in Colombia and Venezuela offers an opportunity to test the usefulness of Edward Herman and Noam Chomsky’s “propaganda model,” developed in their 1988 book Manufacturing Consent: The Political Economy of the Mass Media