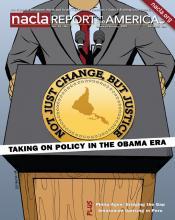 What Latin America needs is not change that would enhance U.S. interests, but a healthy dose of social justice. The region suffers from astounding inequality. In Bolivia, according to the UN Development Program (UNDP), the ratio of income received by the richest 10% of the population to the poorest 10% is 168 to one, making it the most income-unequal country in the world. Ten Latin American countries are among the next 15 on the UNDP’s rankings, vying for second place among the “most unequal.” Inequality between countries is also immense. According to LatinFocus, about 70% of the region’s GDP is produced by just two countries, Brazil and Mexico. And IMF figures show that GDP per capita in Chile, Argentina, Uruguay, and Venezuela is more than double that of most of the countries of Central America and the Caribbean.

Any policy agenda for the Americas — one that promotes economic development, inclusive social policies, equal access to resources and infrastructure, and genuine democratic participation—must begin with these hard facts. And it must take into account that all this exists under the careful watch of the United States, whose influence in the region, the Brookings report laments, is slipping away. The long-standing U.S. pursuit of its own interests across the region must be held at least partially responsible for this sorry state of affairs.

The Meltdown: North and South
Fred Rosen
As the U.S. economy continues to tank, Latin America is caught up in the global freefall. As demand contracts, the prices of the region’s principal exports—crude oil, natural gas, metals, grains, livestock, and food—are plummeting, converting the region’s terms of trade from pretty good (especially over the past five years) to very worrisome. Oil prices, from highs of nearly $150 a barrel in July, had fallen to under $70 a barrel by November, distressing oil producers Venezuela, Mexico, Bolivia, and Ecuador.

Not Just Change, but Justice: Taking On Policy in the Obama Era
NACLA
Our intention in this Report is to take on policy by asking two very difficult questions: first, “What might a progressive U.S. policy agenda look like?” Second, “What can we, progressive U.S. activists, contribute to the debates over the policies and political mobilizations that can bring us closer to such an agenda?”

El Salvador 2009: A ‘Change’ Year?
Jason Wallach
In the congressional and presidential elections that will take place in January and March, respectively, an FMLN victory will rely heavily on stronghold neighborhoods like Mejicanos, where most people live in densely packed cinder block apartment buildings. As the bullet-pocked walls attest, the area was home to brutal fighting during El Salvador’s civil war that scarred the country from 1980 to 1992, and few residents here have forgotten.

Against the Law of the Jungle: Peru’s Amazonian Uprising
Gerardo Rénique
Between August 9 and 20, thousands of Awajun, Wampis, Matsiguenka, Shipibo, and other indigenous peoples of the Amazon mounted an unprecedented series of simultaneous, peaceful demonstrations against the Peruvian state. Their primary demand was the withdrawal of Law 840, popularly known as the Law of the Jungle, presented to Congress for approval in late 2006 by President Alan García.
Bridging the Gap: Philip Agee, 1935–2008
Chris John Agee
As was widely reported in the media, Philip Agee — who resigned from the CIA and wrote a book about it — died last year, on January 7, 2008. His life served as an example of unparalleled dedication to bridging the gap between what people know and don’t know about the hidden policies of U.S. imperialism.

Progressive Policy for the Americas? A NACLA Roundtable
NACLA
In early September, NACLA invited Lesley Gill, Greg Grandin, Deborah Poole, and Mark Weisbrot to participate in a roundtable discussion on the question of proposing a progressive U.S. foreign policy agenda toward Latin America. What follows is an amended version of that conversation, moderated by NACLA director and publisher Christy Thornton.
The Minga of Resistance: Policy Making From Below
Deborah Poole
Minga is a Quechua word meaning “collective work” with wide currency among popular and poor sectors, both indigenous and mestizo, of the Andean republics. The Cauca-based minga of 2008 was grounded in the territorial and cultural demands of Colombia’s indigenous peoples, yet it is a movement that now extends across the Andes, engaging indigenous and non-indigenous sectors in Colombia, Ecuador, Bolivia, and Peru.
Beyond the Four Freedoms: Obama and Sovereignty
Greg Grandin
To get a sense of what Barack Obama’s foreign policy will be, we should watch Latin America. The region has long lived like the proverbial canary in a coal mine, a reliable indicator of what’s in store for the rest of the world when circumstances prompt Washington to shift diplomatic direction.
Colombia: What’s Next?
Lesley Gill
As much of Latin America drifts away from the U.S. orbit, and the financial crisis further discredits neoliberalism, U.S. progressives have an important opportunity to push for a more enlightened Colombia policy.
Treating Bolivia as a Sovereign Partner
Roger Burbach
A progressive U.S. policy toward bolivia must confront three major thrusts of Washington’s current Latin America policy: (1) the war on drugs, which is linked to the global war on terror, (2) the effort to expand U.S. economic and corporate influence through free trade agreements, and (3) a determination to counteract the growing influence of leftist leaders and the social movements that are militating against neoliberalism and the historic U.S. domination of the region.
Reversing Course: A New Economic Agenda for Latin America
Matías Vernengo
The most important item in a progressive U.S. economic agenda for Latin America would be reversing the corporate bias of the free trade agreements (FTAs) that have been signed over the past decade and a half.
Solidarity: The Only Effective Labor Policy
Dan La Botz
A progressive labor policy, at least from a Latin American perspective, entails the struggle against imperialism in support of sovereignty and socialism.
A Grassroots Vision for U.S. Immigration Policy—and Beyond
Jane Guskin and David Wilson
Any policy addressing the right to migrate needs to take into account “the right not to migrate” — already a popular slogan among indigenous people from the southern Mexican state of Oaxaca, as documented by labor journalist David Bacon.

Debating the Raids: A Misstatement and a Disagreement
David Bacon
In his article in the November/December issue, "Building the Homeland Security State," Roberto Lovato says: "David Bacon posits that the crackdown is purposefully meant to trigger an immigrant-labor shortage, which will eventually enable the government to establish the migration policy it’s been pushing for all along: a temporary guest-worker program." After setting up this straw man, he then proceeds to attack it.

Framing Peace as Violence: TV Coverage of L.A.’s May Day 2007
Otto Santa Ana
On May 1, 2007, thousands of Los Angeles residents took to the streets to reprise the massive immigrant rights march that captured the nation’s attention a year earlier. The day began with a peaceful march of about 25,000 people in downtown Los Angeles, followed by a smaller afternoon march to MacArthur Park. Sadly, violent police misconduct abruptly ended this second rally. How did the TV newsrooms represent this important event to the public at a time when the nation’s attention was focused on immigration policy?