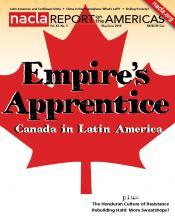 Behind Canada's do-gooder facade in the Americas is a country torn in contradictory directions, not all of which are particularly benevolent. Under the government of Conservative prime minister Stephen Harper, three factors have exerted a powerful influence on Canadian involvement in Latin America: (1) corporate interests, particularly extractive industries, (2) politicians’ commitment to free market fundamentalism, and (3), above all, the government’s frankly slavish alignment with U.S. foreign policy. This disposition has increasingly undermined Canada’s traditional reputation and has sent an unfortunate message to the region: Tory Canada is the Empire’s apprentice.

A Long Time Coming: Unity on the Mayan Riviera
Fred Rosen
In February, leaders representing all the countries of the Americas, save the United States, Canada, and Honduras, came together to reaffirm their commitment to create a new regional multilateral organization.

Out of the Past, a New Honduran Culture of Resistance
Dana Frank
Whatever comes next in Honduras, tens of thousands of ordinary Hondurans, from its new culture of resistance, will meet it with nerves of steel, forged in the terrible repression that followed the military coup in June. What exactly is this new creature, the Honduran resistance?

A Diplomatic Theater of the Absurd: Canada, the OAS, and the Honduran Coup
Maxwell A. Cameron and Jason Tockman
Throughout the Honduran crisis, Canada moved in lockstep with the United States. Doing so clashed with Canada’s frequently stated commitment to multilateralism and democracy.
A Time Line of the Canadian Anti–Colombia FTA Campaign
Sheila Katz and Gauri Sreenivasan
Against the Odds: Fighting Canada’s Free Trade Deal With Colombia
Sheila Katz and Gauri Sreenivasan
Although Canada and Colombia signed a free trade agreement in 2008, the Canadian Parliament has still not ratified it, thanks largely to an effective civil society campaign.
Canadian Mining: Still Unaccountable
Karyn Keenan
Latin America is the most important destination for Canadian mining capital. Efforts to regulate the industry, which is associated with all manner of social and environmental disruptions, have thus far been stymied.
Canadian Re-engagement in Latin America: Missing the Mark Again
Ricardo Grinspun and Yasmine Shamsie
Both Conservative and Liberal governments in Ottawa have expounded their faith in neoliberalism. With its new policy of re-engaging Latin America, the Harper government remains undaunted.
Empire’s Apprentice: Canada in Latin America
Behind Canada's do-gooder facade in the Americas is a country torn in contradictory directions, not all of which are particularly benevolent. The government of Conservative prime minister Stephen Harper has increasingly undermined Canada’s traditional reputation and has sent an unfortunate message to the region: Tory Canada is the Empire’s apprentice.
Harper’s ‘Wise Words’
Sheila Katz and Gauri Sreenivasan
No Smoking Gun—Yet: Canadian Democracy Assistance in Bolivia
Neil Burron
Canada is a major source of bilateral democracy assistance in the hemisphere. In the case of Bolivia, Canadian efforts have not been used to undermine the leftist MAS government; however, a more interventionist model may be in the making.

Canada, Colombia, and the Global Race to the Bottom
Agustín Goenaga Orrego
The Failure of Global Capitalism: From Cape Breton to Colombia and Beyond, by Terry Gibbs and Garry Leech
New & Noteworthy
Human Rights in the Maya Region, edited by Pedro Pitarch, Shannon Speed, and Xochitl Leyva Solano; Global Maya: Work and Ideology in Rural Guatemala, by Liliana R. Goldín; Voices From Exile: Violence and Survival in Modern Maya History, by Victor Montejo
The Ends of Poverty
Vijay Prashad
The End of Poverty?, a documentary film by Philippe Diaz, Cinema Libre Studio, 2010 (DVD), 104 mins.

What’s Left for Latin America to Do With China?
Kevin P. Gallagher
Why are recent reports by the World Bank and the Organization for Economic Cooperation and Development hailing the increase in China–Latin American trade relations?