Changing Identities: The Politics of Race and Globalization, Part I 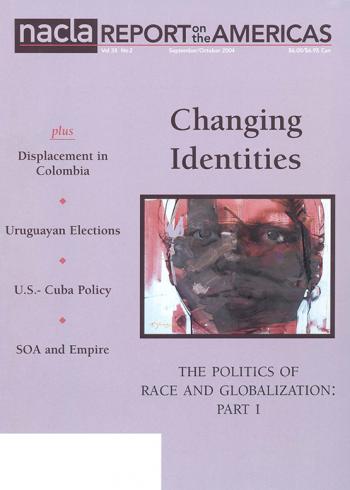 This NACLA Report is the first of a projected trilogy on "The Politics of Race and Globalization." It continues the exploration begun in our 2001-2002 "Race and Racism in the Americas" series, which provided a broad-ranging but necessarily incomplete first passage through the intersection of race, culture and politics in this region of abounding human diversity. The current series investigates ethno-racial politics in the Americas under the specific conditions of "globalization," where this concept encompasses both the increasingly transnational flow of people and cultural products as well as the varied effects of neoliberal economic restructuring.

This first issue in the series, "Changing Identities," looks at the ways that globalization has reset the regional stage on which the politics of racial identity play out. As the contributing authors illustrate, racialized groups have engaged with these changes in the socio-political context differently to declare their varied presences and claims in new ways.