¡Golpistas! Coups and Democracy in the 21st Century 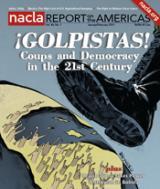 NACLA has collected in this Report a series of articles analyzing 21st-century coups in the Americas—in Venezuela (2002), Haiti (2004), and Honduras (2009)—against the backdrop of popular movements for democracy and economic justice. The fight to overcome neoliberalism in the region has produced not only left-leaning governments but, perhaps more significantly, a widespread, commonsensical respect among citizens for transparent, democratic norms and institutionality. Coups are seen as an extra-legal retrogression to a barbarous past. The dark days of the region’s late-20th-century military dictatorships, which came to power through U.S.-sponsored coups, comprise a sinister legacy that continues to inform how leaders and social movements in the region frame current events. Coups, and the threat of coups, are still a part of the Latin American reality, even in the 21st century.