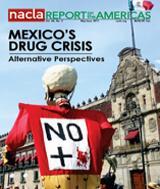 More than 40,000 Mexicans have been killed since the country's president, Felipe Calderón, launched his U.S.-backed “War on Drugs” in 2006. But the sensationalized media coverage and the government’s stilted depiction of the crisis clarify little. The superficiality, silences, and outright distortions demand alternative, progressive analyses of Mexico’s drug war. In this Report, we offer a series of articles that aim to provide much-needed historical and cultural context to understanding the crisis.