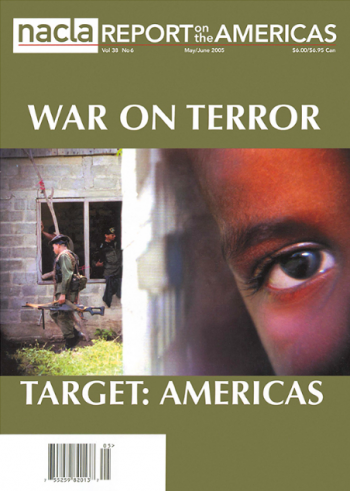 “The new War on Terror is going to be a different war,” announced George W Bush to the world just after that fateful day in September 2001. For once, Bush chose his words carefully. He called it the new War on Terror, because, as many have since pointed out, the Reagan Administration had actually made the declaration of a “War on Terror” 20 years before in reference to the Soviet Union’s alleged support of an international "terrorist" network. Ironically, it was during the Reagan years that Washington itself sponsored and directed terrorist acts with ferocious precision.

Many aspects of the War on Terror have been practiced before, especially in Latin America. It is already evident that the "terrorist" trope is being indiscriminately applied to groups in the region as disparate as insurgent rebel groups, teachers' unions and undocumented immigrants; this is similar to the way “Communist” was the all-purpose label for the “internal enemy” of the Dirty Wars. Colombia is only the most glaring example of how the War on Terror threatens to further devastate the region by making a bad situation worse.

This Report analyzes these changes and looks at some of the effects on countries that have internalized the War on Terror.