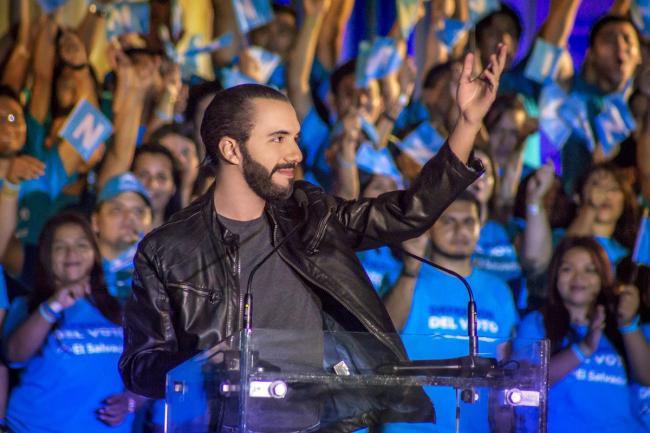 This fall, President Nayib Bukele of El Salvador announced plans to run for reelection in his Independence Day speech. Immediately, the audience of devotees broke into a standing ovation, as Bukele, flanked by four Salvadoran flags and a proud wife, struggled to contain a smile.

Only one detail marred the occasion: El Salvador’s constitution prohibits immediate reelection. Not only do multiple articles forbid it, but one demands “insurrection” against violators.

Bukele’s announcement marks another stage in El Salvador’s slide toward authoritarianism. Since March, the country has been in a “state of exception,” and officials have arrested over 50,000 civilians in ruthless anti-crime sweeps.

The Biden administration and local critics have justly condemned Bukele’s policies as a menace to democracy. Yet in many ways, his rise to power equally implicates the United States and opposition parties. For three decades, U.S. immigration and security schemes, neoliberal reform, and punitive law enforcement practices have weakened Salvadoran democracy. Rather than an anomalous renegade, Bukele and his authoritarian program reflect a painful history of foreign intervention, failed policies, and frustrated hope.

Authoritarianism previously sank roots in El Salvador in 1932, after General Maximiliano Hernández Martínez orchestrated La Matanza, slaughtering around 30,000 civilians—many of whom were Indigenous—to suppress a popular uprising. Political scientist William Stanley concludes that a “protection racket state” arose in the massacre’s blood-streaked wake. Businessmen ceded state power to the military, while officers wielded it to protect the class structure.

The Cold War kindled elite fears of another leftist uprising, while slotting the country into the United States’ strategic architecture for the hemisphere and cementing the repressive status quo. When citizens briefly ousted military rule in October 1960, U.S. officials cautioned the new junta against progressive reform before backing a counter-coup that January.

By the 1970s, a potent fusion of liberation theology and Marxism galvanized social movements demanding democracy and economic justice, which radicalized as officers rigged elections in 1972 and 1976, blocking the path to reform. In 1980, the left formed the Farabundo Martí National Liberation Front (FMLN) and mobilized to sweep the military from power.

Yet again, the United States intervened, turning El Salvador into the third largest aid recipient, funneling some $5 billion in assistance over 12 years to frustrate the revolution. As tensions spiraled, the chain-smoking colonel Roberto D’Aubuisson assassinated Archbishop Óscar Romero, a leading liberation theologian and critic of intervention. In popular memory, his assassination became the immediate catalyst of the war.

In 1981, the U.S.-trained Atlácatl Battalion slayed around 1,000 civilians in the El Mozote Massacre. In the aftermath, Washington blamed the FMLN to protect the flow of military aid. An embassy officer later admitted, “The United States was complicit.”

Ultimately, the FMLN refused to surrender, compelling the oligarchy to negotiate and ushering in the country’s democratic transition in 1992, when it became a political party. Yet the war left El Salvador with an immense legacy of violence and thwarted demands for social justice, a layered history of repression that hung over society like bleeding shadows.

For most Salvadorans, the postwar period was a time of collective vertigo and catastrophic continuity. Under the direction of the U.S.-funded Foundation for Social and Economic Development (FUSADES), successive ARENA administrations embraced neoliberalism, drastically shrinking public expenditure, privatizing state assets, and pursuing dollarization. Anthropologist Ellen Moodie argues that El Salvador became a neoliberal laboratory, as the oligarchy exploited the dislocation and shock of war to restructure the economy.

Wealth seemed to appear out of thin air—the proliferating businesses of anonymous investors, remittances from citizens residing abroad, new mansions with soaring walls and concertina bramble. Yet as social exclusion persisted alongside political liberalization, inequality and violence became defining features of Salvadoran democracy. Migrant labor turned into a leading export, as citizens sought jobs abroad. By 2004, 22 percent of homes received remittances, which constituted 16 percent of the GDP and a leading source of foreign exchange.

In 2003, President Francisco Flores announced his Mano Dura (Iron Fist) policy, promising to eradicate crime with uncompromising force. An ARENA memo later revealed that the policy was a plot to boost the party’s appeal before the 2004 election.

Incessant footage of tattooed prisoners—theatrically stripped, manacled, and paraded before news cameras—became a biopolitical spectacle, converting maras into embodied abstractions that the government exploited to secure both the fear and allegiance of scandalized citizens.

Still, the policy failed. Indiscriminate arrests resulted in few convictions and massive human rights violations, while raids encouraged gang members to adopt more complex forms of organization. Studies indicate that the government has often manipulated homicide and violence-related statistics for political ends, making the actual role of gangs in fueling violence less clear than commonly believed. At peace, El Salvador remained one of the most violent countries in the world.

The U.S. embassy lauded Saca for his “unabashedly pro-American administration” and safeguarding “an exceptionally-close and cooperative bilateral relationship.” “Saca acknowledged frankly that El Salvador was in the United States’ zone of influence,” one diplomat confided.

In 2008, the Great Recession throttled El Salvador with special severity, dramatizing the perils of economic dependency on the United States—and fueling further violence and gang activity. At this critical juncture, the FMLN backed Mauricio Funes for president in the 2009 election. A moderate social democrat, Funes championed the right to a “vital minimum” of food, work, education, and healthcare.

From Washington, U.S. legislators threatened mass deportations if citizens elected Funes. But he still won, receiving 81 percent approval ratings by inauguration day and a clear mandate for reform. Over the next decade, Funes and his successor, Salvador Sánchez Céren, slashed poverty rates from 40 to 26 percent and promoted social inclusion.

Yet high homicide rates persisted. By 2010, one poll reported that 72 percent of civilians would accept any form of government that resolved the crisis. Forty-five percent would even back a coup.

In response, the FMLN strengthened punitive law enforcement policies, consolidating a cycle of secret negotiations with gangs, periodic truces, and indiscriminate police operations. The independent journal El Faro ironically concluded in 2016 that since the end of the war “military officials never had such a prominent role as during the two FMLN governments.”

That year, Funes fled the country for exile in Nicaragua to evade money laundering charges. By then, authorities had already arrested former presidents Flores and Saca for embezzling public funds, welding the stigma of corruption to both parties.

In an interview with anthropologist Ralph Sprenkels, a former guerrilla summarized the general discontent. “This shitty peace,” he asked, “what has it been good for?”

The apparent exhaustion of the political system enabled Nayib Bukele of Nuevas Ideas to vault to power in 2019. With Bonapartist flair, Bukele posed as the savior of the country, advertising himself as a dynamic alternative to the soiled two-party establishment (he was expelled from the FMLN in 2017). Although the scion of a business dynasty, his youthful vigor and arresting charisma lent force to his promise to restore national dignity, secure prosperity, and, most of all, eradicate crime—skillfully exploiting both the pent-up hopes and frustrations of voters.

Yet while lambasting the policies of his predecessors, Bukele largely replicated them. His administration aggressively liberalized the economy, announcing to investors that “dinner is served.” He also accepted President Trump’s immigration policy, even after the Republican labeled El Salvador a “shithole” country. And he imitated the same corruption, stacking his government with family members and allowing colleagues to pilfer state assets.

Most alarmingly, Bukele rolled out a new mano dura program, exploiting the social crisis to accumulate power, bolster his popularity, and silence adversaries. In February 2020, he invaded the Legislative Assembly with a phalanx of soldiers in order to push through his security budget. “Now I believe that it’s very clear who has control of the situation,” he icily observed.

During his first years in office, he adopted a slew of draconian measures: enforcing his Covid-19 quarantine policy by arresting hundreds of citizens, slamming dissident voices on social media, and joking that he was the “coolest dictator in the world.”

After his party captured the assembly in 2021, Bukele stacked the Supreme Court with supporters, rapidly concentrating power in the executive branch. To decrease violence and solidify approval ratings, he also announced unsustainable defense expenditures, planning to double the size of the army. Hoping to turn the country into a financial hub, he made bitcoin legal tender, later bragging that he invested state funds in cryptocurrency while on the toilet. Behind the scenes, his government reportedly secured gang support for a truce with sex workers and cellphones.

In March 2022, the ceasefire collapsed, igniting another round of violence. Bukele exploited the failure of his own policy to declare a “state of exception,” deploying the military and arresting over 50,000 supposed gang members. This September, his autocratic ambitions became transparent: leveraging the popularity of his anti-crime campaign, he announced plans to illegally run for reelection in 2024.

Decades of U.S. policy and ARENA-FMLN rule created this populist moment, while denying alternatives. Rather than rupture, Bukele represents extreme continuity, personifying the market fundamentalism and systemic violence that brought him to office. Ironically, the last president to seek immediate reelection was General Hernández Martínez. And the poor youth that his administration packs into prison represent the very social groups that his predecessors targeted in La Matanza and the civil war. As Bukele accumulates power, his state of exception seems to suspend time itself, trapping Salvadorans between an elusive future and interminable past.

Jonathan Ng received his Ph.D. from Northwestern University, specializing in the history of U.S. foreign relations. Currently, he is a postdoctoral fellow at the Center for Presidential History at Southern Methodist University.