Estamos Listas supports feminist candidates for public office and is taking action to end violence against women in Colombia. 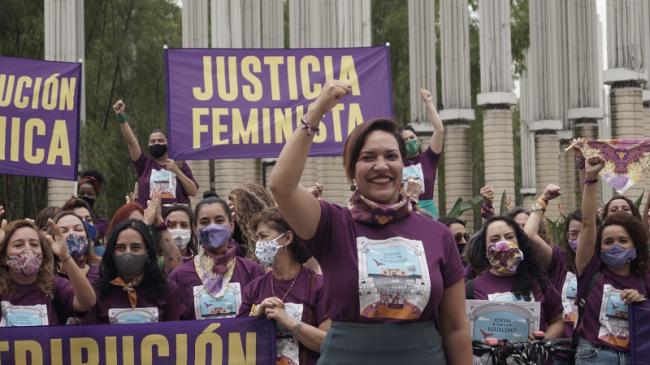 The last thing that Pamela Lorduy remembers from June 8, 2019 was having an argument with her boyfriend at the time. The following day, she woke up in hospital. She had broken her pelvis in six places, three ribs, four vertebrae, her tibia, fibula, heel bone, ankle, sacrum, and humerus bone.

Lorduy, now 29, believes her ex-boyfriend of 14 years pushed her off the ninth-floor balcony of the home they shared in Envigado, a town south of Colombia’s second-largest city, Medellín. Envigado is in the department of Antioquia, home to the country’s most dangerous municipalities for women.

The year of Lorduy’s attempted murder, one Colombian woman became a victim of violence at the hands of her partner or ex-partner every 13 minutes, according to Sisma Mujer, an organization that works with victims of gender-based violence.

Today, the administrative analyst still suffers from chronic pain, limited mobility, depression, and anxiety, while her ex-partner—after spending 540 days in preventive prison—now walks the streets a free man, having exceeded the legal timeframe for pre-trial detention. His trial is yet to take place.

In 2020, more than 90 percent of family violence cases against women in Colombia remained in the “inquiry” stage, and only seven percent went to trial, according to Sisma Mujer.

“The justice system in this country doesn’t work,” Lorduy said.

Marta Restrepo, a member of Colombia’s first nationwide feminist political movement, Estamos Listas, believes that the existing justice system fails women. “The feminist presence on the interior of the justice system … is practically absent,” she said.

Estamos Listas, or “We’re Ready,” is a grassroots movement born in Medellín in 2019 building a feminist democracy by redistributing power and wealth and achieving justice for women. One of its main priorities is to combat violence against women in Colombia. Estamos Listas is currently endorsing Francia Márquez and Angela Robledo, two progressive feminist precandidates who will run in next year’s presidential elections.

Feminists in Colombia, Restrepo believes, are at an inflection point. Responding to the state’s failure to serve them, they have spent years building alternative political worlds through independent, non-governmental organizations. But not engaging with the political system means patriarchy still defines the state.

“What Estamos Listas has proposed to Colombia and its feminists is to occupy the state,” Restrepo said. “We see no other alternative.”

The organization recently decided to expand its current base of 800 active members nationwide. They hope to recruit a diverse range of women from another 120 municipalities across Colombia to join the movement. As Estamos Listas is not connected to a political party, the movement is currently collecting a list of signatures to gain representation in the Colombian Senate as an independent political movement.

April 5, Estamos Listas held the country’s first National Feminist Convention, inviting precandidates Márquez, a human rights and environmental activist, and Congresswoman Robledo. Instead of Colombia’s largest cities such as Bogotá or Medellín, they chose Honda, Tolima, for the event—a small town in central Colombia that connects the country’s peripheral departments, to reflect their aim of decentralizing politics.

Márquez is a well-known social leader from a village in Cauca, a victim of Colombia’s half-century-long armed conflict, and the winner of the 2018 Goldman Environmental Prize. Robledo is a congresswoman, previously for the center-left Green Alliance in Bogotá and was the running mate of leftist candidate Gustavo Petro in the 2016 presidential elections.

Márquez will be running independently for president, through the political movement Soy Porque Somos (I am because we are). Robledo will be running with the center-left Hope Coalition, comprised of the Green Alliance, and five other centrist and leftist politicians. Although the two women will compete against each other for the presidency, they both, along with Estamos Listas, share a common goal: to feminize the state.

Through their endorsement of Márquez and Robledo’s presidential candidacies at the National Convention, Estamos Listas formed part of a “pact” of progressive female politicians and the Colombian feminists who will vote for them.

This social and political pact, explained Restrepo, will give citizens the ability to advance structural change. “And this is only possible if we remove this minority from political power,” she said.

Since Dora Saldarriaga became the Estamos Listas representative for Medellín’s city council in 2019, the movement has pioneered campaigns to track down disappeared women, support the families of feminicide victims, and reduce soaring levels of violence against women.

Their members, or “militants,” wear purple neckerchiefs to identify themselves around the city. They fight to change the unequal power dynamics between women and men in all areas of society and put women’s lives at the political center, as opposed to economics or private property.

According to Restrepo, the movement’s manifesto focuses on recognizing the gradual decline of the state, acknowledging the political and economic value of reproductive and care-orientated work, defending life, and opposing the anti-rights agenda.

“The advancement of an anti-rights agenda is a fundamental nod to those backward political sectors who want us to retreat in what we have earned through years of fighting, not only for women, but also for sexual and gender diversity, and for the groups historically deprived of power in our country—Afro-Colombians, Indigenous people, rural farmers, and the working class,” Restrepo said.

The women who experience the highest levels of violence in Colombia are racialized, explained Márquez in an interview.

“As an Afro-descendant woman, I want to aim for the precedency and vie for a position that has been a place of privilege for white men,” she said. “I represent the voices of some women who, although they don’t stand out in feminism, are taking action against the injustice we live through in society.”

Violence Against Women in Colombia

According to Colombia’s Feminicide Observatory, so far in 2021 there have been 106 feminicides. The United Nations defines feminicides as homicides of women killed by gender violence. Last year, there were 630 feminicides, an increase of more than 10 percent from 2019. However, the ethnicity of the victim was only specified in 125 cases during 2020.

Restrepo believes the “tremendous deficit” in information systems for reporting these crimes is due to state corruption and a lack of coordination between government agencies, which often restrict access to these databases.

In Colombia, violence against women also goes underreported because it is normalized, dissuading women from speaking out, explained a recent Sisma Mujer report. State institutions often stigmatize or revictimize women, meaning they refrain from telling their stories out of fear.

“I feel a responsibility to raise my voice for the other women who couldn’t raise theirs,” said Lorduy. “I’m raising mine for me and for all of them.”

Like in Lorduy’s case, the majority of violence against women happens in the home, and according to Sisma Mujer, mostly at the hands of a partner. For Adriana Benjumea, Director of Corporación Humanas Colombia, a research center that works to defend women’s rights, these numbers are a cause for concern because the home should be a safe space for women.

While women were confined to their homes during the pandemic, violence against them worsened. From March 2020 to February 2021, calls to Colombia’s domestic violence helpline increased by approximately 85 percent.

In a recent report on the impact of the pandemic on women across the world, the United Nations attributes this increase to five factors: security, health and money worries, cramped living conditions, isolation with abusers, movement restrictions, and deserted public spaces.

But in Colombia, Benjumea believes prevention fell short. “During the pandemic, the Colombian government was late in generating a rapid response to reports of violence against women,” she pointed out.

In Latin America, the pandemic has also set back women’s participation in the labor market by a decade, according to the United Nations.

“This sector of society … is the weakest link in the chain,” said Benjumea. “They’re the women who used to work in domestic service and were laid off, the sex workers unable to work during the pandemic, the female informal workers,” she reeled off the list.

City Councilwoman Saldarriaga believes the only way to remedy the gender pay gap is through political determination. Márquez hopes to drive this change.

“Economic empowerment driven by public policies that put care for life at the center is a priority,” Márquez said.

But before she can do this, Márquez believes she must heal the wounds of Colombia’s armed conflict first. “Armed conflict has served as a distraction for the state to avoid concentrating its actions on its basic purpose,” she said.

Restrepo of Estamos Listas says that it is significant that two women will run for president and Colombian feminists must rally behind them. Estamos Listas is hoping to build the necessary political and strategic unity to overcome the barriers to a woman being elected.

“It will be the biggest ever bet to change the hegemonic power structures,” said Saldarriaga, reflecting on the prospect of a feminist presidency. “It would be the first time that two women … would change the discourse of war that we have heard for so many years for a discourse of life, one which structurally modifies inequality.”

Sophie Foggin is a freelance journalist based in Medellín, Colombia covering human rights, politics, and gender issues in Latin America.