Join us for a presentation on "Romance Tropical," a virtual exhibition by Puerto Rican interdisciplinary artist Mónica Félix. Followed by a film screening of Juan Viguié's Romance Tropical (1934). RSVP here.

In partnership with the Center for Latin American and Caribbean Studies at New York Univeristy (CLACS at NYU).

"Romance Tropical" is a research, photography, and video project by artist Mónica Félix. It is based on the lost black and white Puerto Rican film, Romance Tropical (1934) while exploring its colonial romance, and the color technology that frames it. Although she thought her project was completed in 2016, the "lost" film was found at the UCLA Film Archives in 2017. Ever since then, Félix has been working on an epilogue to her work that came to a conclusion during quarantine this year. The entire work is up for view online and features collaborations with Puerto Rican curators and writers Dalina A. Perdomo Álvarez, Pedro Noel Doreste, Ángel Rafael Vázquez-Concepción y Naida García-Crespo. She also collaborated with Argentinian sound designer Joesfina Rozenwasser Marin and Puerto Rican-born, Florida-raised sound artist Rosana Cabán.

The exhibition will be on view until September 7th, 2020 at romancetropical.gallerist.art

Sometime in the late 1930s, the film Romance Tropical vanished. Regarded as the first film with sound made in Puerto Rico, and second Spanish-language talkie in the world. The film premiered at Teatro Campoamor in New York City. Directed by the filmmaker Juan E. Viguié, with a script written by poet Luis Palés Matos, with music by the composer Rafael Muñoz; three well-known names in the arts of Puerto Rico. The narrative of the film revolved around a man's search for love and riches and a "savage island" called Mu. 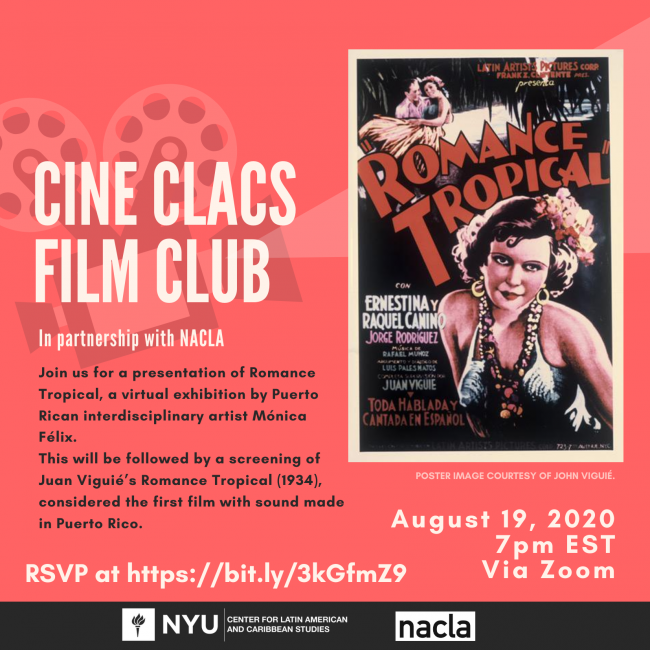 Mónica Félix is an interdisciplinary artist, professional photographer, and yoga instructor based in Brooklyn since 2010. She has a BA in Communications from the University of Puerto Rico, a Photography Certificate from Pratt Institute, and is currently finishing her MFA in Visual Arts at Columbia University. She moved to New York City to pursue a career as a visual artist and a professional photographer. In 2013, she was the recipient of the Lexus Grant for Artists at the Museum of Art of Puerto Rico. She has participated in solo and group exhibitions in Puerto Rico, New York, California, and Spain.

CineCLACS Film Club is an initiative that aims to be a social space for students and our communities to connect and explore film and media from Latin America and the Caribbean. For more information, please contact CLACS ADMIN AIDE, Johanna Morales at jm8206@nyu.edu