Free Trade 2.0? Perspectives from Mexico, Peru & the US

The Urban Democracy Lab at New York University and the North American Congress on Latin America (NACLA) invite you to a two-part event with activists, analysts, and scholars from Latin America and the U.S. to consider what the region's recent conservative turn will mean in two key areas: trade and politics. 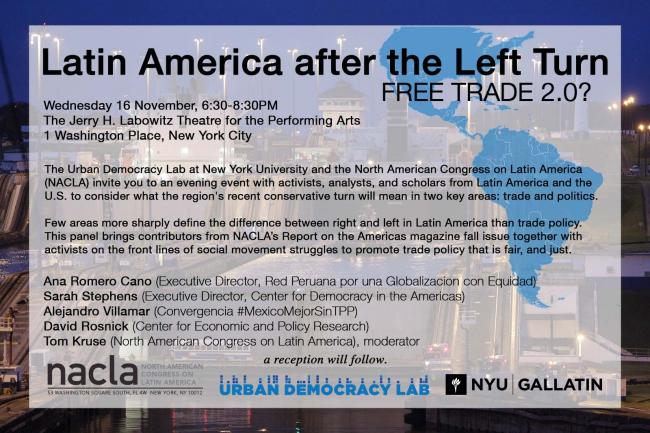 Obama may try to push through TPP before the end of his term, but activists here in the US and throughout Latin America are standing together to stop TPP and to counter the nativist hatred that has animated the current political moment. Come hear from movement leaders from Peru, Mexico, and the US to strategize how we create the world we want in the midst of a turn to the right. This panel brings contributors from NACLA’s Report on the Americas magazine fall issue together with activists on the front lines of social movement struggles to promote trade policy that is fair, and just.

The event will be held at: