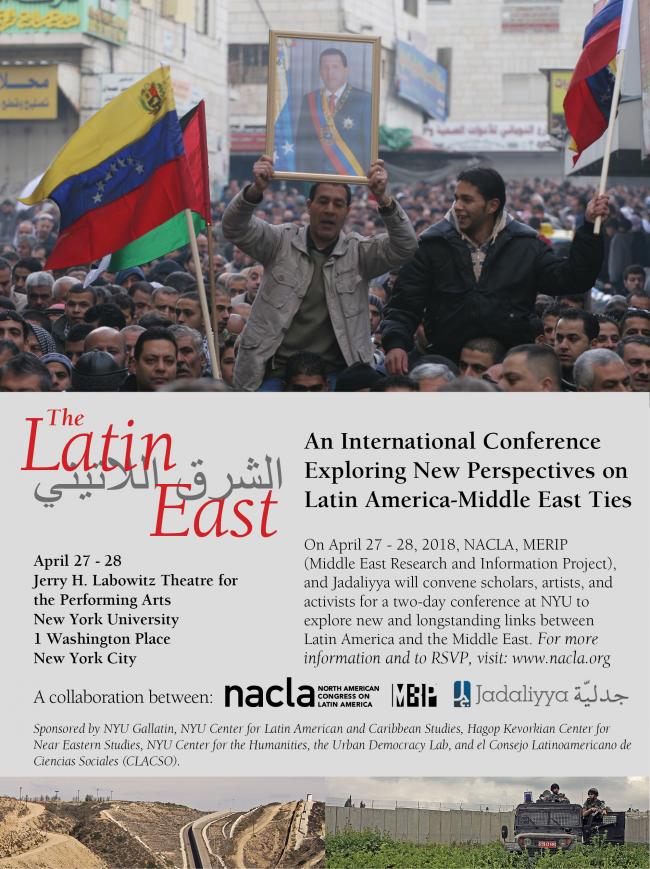 At the height of Latin America’s “pink tide” in the mid-2000s, left wing governments throughout the region developed unprecedented economic, political, and cultural ties with the Arab world as part of a larger effort to disrupt U.S. hegemony globally. Meanwhile in the Middle East, entrenched power regimes seemed to teeter against a wave of social and political movements broadly identified as the Arab Spring. Today, as the Pink Tide recedes and renewed conflict and authoritarianism grips the Middle East, the time is ripe to consider the origins, contours, and legacies of a relationship forged in a moment of deep regional and global flux, between parts of the world infrequently considered side by side.

On April 27 - 28, 2018, NACLA, MERIP (Middle East Research and Information Project), and Jadaliyya will convene scholars, artists, and activists for a two-day international conference at New York University to explore new and longstanding links between Latin America and the Middle East. Contributors will consider social movements, cultural exchanges, political and economic institutions, and transnational solidarity and diaspora politics in light of the Arab spring and winter, and against the backdrop of nearly two decades of left wing governance in Latin America.

The event will be free and open to the public. We will also be livestreaming the event, stay tuned for more information!

Subscribe to the NACLA Report today to receive our Spring Issue on the Latin East—the first of our 50th year of publishing!—which features a special publishing collaboration between NACLA, MERIP, and Jadaliyya, with essays from the conference participants.

This event is sponsored by: