Nov. 17: Bolivia's Electoral Victory: What Challenges Lie Ahead For MAS?

The Center for Latin American and Caribbean Studies at New York University (CLACS) and the North American Congress on Latin America (NACLA) present a panel discusion with scholars and activists on the recent Bolivian elections.

On November 8, Luis Arce of the Movimiento al Socialismo (MAS) party will be sworn in as Bolivia's President after a sweeping victory with 55.1% of the vote in the October 19th elections. Arce declared on social media: "Now our great challenge is to rebuild our homeland in peace, to regain joy, stability and hope for a better tomorrow for all Bolivians." David Choquehuanca, Vice Presidential candidate, similarly spoke of unity, respect, healing and the necessity to recuperate the path of "Vivir Bien" [Living Well].

The return of the MAS to government ends the ultra-rightist government of Jeanine Añez, marked by the Senkata and Sacaba massacres, political repression, corruption scandals, gross incompetence and the weaponization and political use of the pandemic. For many, the electoral outcome heralds a restoration of democracy in Bolivia after Evo Morales' ouster last year. For others, including many indigenous, labor, feminist, and environmental organizations and movements, the results represent an opportunity to assess and redress deep contradictions in the MAS party and Morales government's policies and practices. For all except the most recalcitrant, it is a sound repudiation of the racist, rightist government of Áñez and its coterie. Against this backdrop of restoration versus transformation, attention is now turning to the immense immediate challenges ahead for the MAS party and Bolivian people.

This panel brings together scholars and activists to discuss some of these challenges: How will the new government navigate the prospect of economic recession, a global pandemic and enduring political polarization? Will MAS' pact wiht agro-industrial elites change (or not)? And how will the government quell far right resistance? How will the new government work with (rather than against) social movements' power and autonomy evolve in relations with the new administration? Will there be an opportunity for debate and reform in the MAS?

The event is free. RSVP here.

WHERE: A Zoom meeting link will appear at the bottom of the RSVP confirmation email. 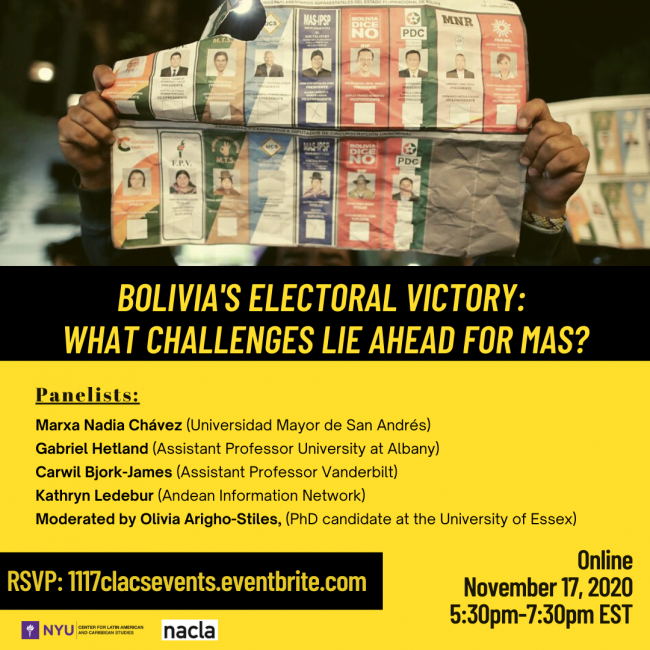 Gabriel Hetland is a political sociologist who uses ethnographic and comparative historical methods to study democracy, the state, urban and national politics, labor and social movements in Latin America and the US. He received his PhD in Sociology from the University at California, Berkeley in 2015. He is working on a book (based on his dissertation) that compares participatory democracy in cities governed by Left and Right parties in Venezuela and Bolivia. This project challenges the idea that participatory reform can only succeed in cities governed by Left parties and in contexts in which civil society enjoys autonomy from the state and ruling party.

Carwil Bjork-James Dr. Bjork-James is a cultural anthropologist whose work focuses on strategies of grassroots autonomy and disruptive protest in Latin America. His book manuscript, The Sovereign Street: Making Revolution in Urban Bolivia (to be published in 2020), analyzes the takeover and use of urban space by grassroots social movements, particularly in the cities of Cochabamba, Sucre, and La Paz. Using both anthropological and historical methods, he explores how pivotal public events generate political legitimacy, contribute to major (sometimes revolutionary) transformations in the balance of power, and provide models for future political action. The ethnographic evidence collected about these events—of social life as experienced through the human body, the meanings attached to places, and social movement practices—explains how grassroots movements exert leverage upon the state through protest.

Kathryn Ledebur has researched coca production, development, drug policy and human rights in Bolivia since 1999. She is the director of the Andean Information Network and is a visiting fellow at the University of Reading. Ledebur studied at FLACSO in Quito, Ecuador and has lived in Bolivia for three decades. AIN is dedicated to investigation, analysis, education and dialogue on the impacts of U.S. and other internationally-funded drug control efforts in Bolivia. She has worked as an instructor at the Bolivian Diplomatic Academy and the International Honors Program of the School for International Training and an expert international consultant. She has written extensively on coca and development dynamics in Peru and Bolivia.

Olivia Arigho-Stiles (Moderator) is a PhD candiate in the Department of Sociology at the University of Essex. Her research covers environmental histories and Indigenous-campesino politics in highland Bolivia, 1920-1990. Her PhD project traces the history of ecological thought within Indigenous movements in the altoplano. She has a BA in History from the University of Oxford and an MA in Latin American Studies from University College London (UCL).