This hybrid virtual AND in person event will feature keynote and Q&A with Francia Marquez Mina, Colombian presidential pre-candidate. Join us online and watch at www.afrolatinofestnyc.com OR in-person at Ambrosia Elixirs. Proof of vaccination required for in-person attendance.

"Changemakers on Film, Black Art, and Politics of Resistance"

"Democratizing the Field: Film Distribution Thru BlockChain Technology," an introduction to CineBlock, an emerging blockchain platform for independent film distribution.

La Toma, a 2010 documentary on the early beginnings of Francia Márquez, only the second Black woman to declare their candidacy for the presidency of Colombia.

Igualada, a sneak preview of a 2022 documentary chronicling the historic candidacy of Francia Márquez Mina.

*There will also be a special guest musical performance in-person at Ambrosia Elixirs. 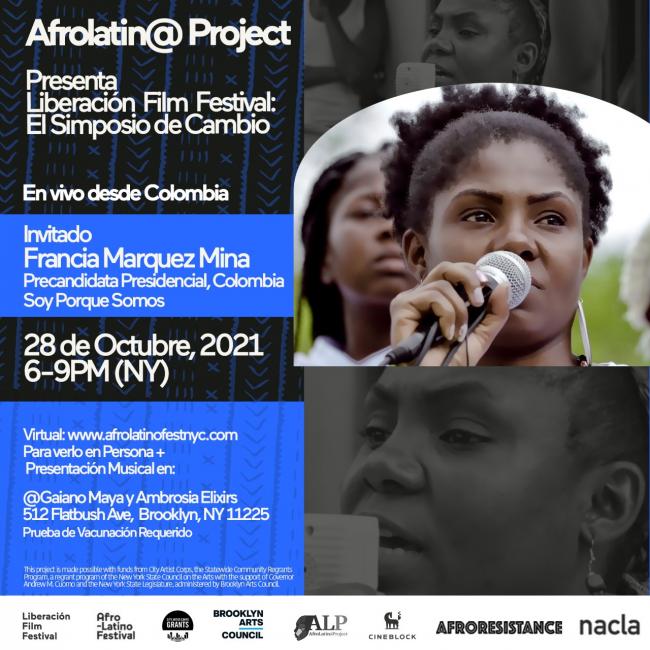 For the virtual event, visit www.afrolatinofestnyc.com or register via EventBrite.

*Free and open to the public. Proof of vaccination required for entry.

This project is made possible with funds from City Artist Corps, the Statewide Community Regrants Program, a regrant program of the New York State Council on the Arts with the support of Governor Andrew M. Cuomo and the New York State Legislature, administered by Brooklyn Arts Council.