Bolivians face the deepest political, economic, and public health crisis in recent history. On top of the tumultuous ouster/resignation of Evo Morales’ government in late 2019, the 2020 Covid19 pandemic has both revealed and critically deepened inequalities along ethnic/racial, class, gender, and urban/rural lines. The right-wing interim government of Janine Añez which seized power after Morales’ ouster (for some his flight/huida) quickly shifted policy rightward, furthering the erosion of basic human rights and democracy. By declaring herself a presidential candidate, Añez also reneged on promises to not seek power. The interim government has weaponized and used the public health pandemic to postpone elections and deepen pre-existing inequalities through the continuation of socially regressive policies, criminalization of dissent, and the acceleration of ecocide, partly inherited from the previous administration. Today an even more dangerous cycle of forest fires looms deep in the Chiquitania and Amazonian regions revealing the scars of ecological destruction caused by deforestation.

Elections will be held in 2020 but it remains unclear how any political outcome - democratic or not - is sustainable. In addition to the devastating social and public health crisis, a full-blown political crisis has erupted. This panel brings together two experts from distinct walks of life and fields of study and activism to reflect upon this period of transition. We will ask our speakers to look back and forward. Looking back we will ask them how do they narrate and assess the end of Morales' 14 years of power? What were some of the conditions that led to the downfall of Morales (historic, political and economic)? And what are the legacies of those 14 years? As we project forward: What are the possible outcome scenarios of the upcoming elections? What are the key outlines and dynamics in the crisis of politics and the state, and the state of play among Bolivia’s once robust social movements? How can we envision a more just future for Bolivia? 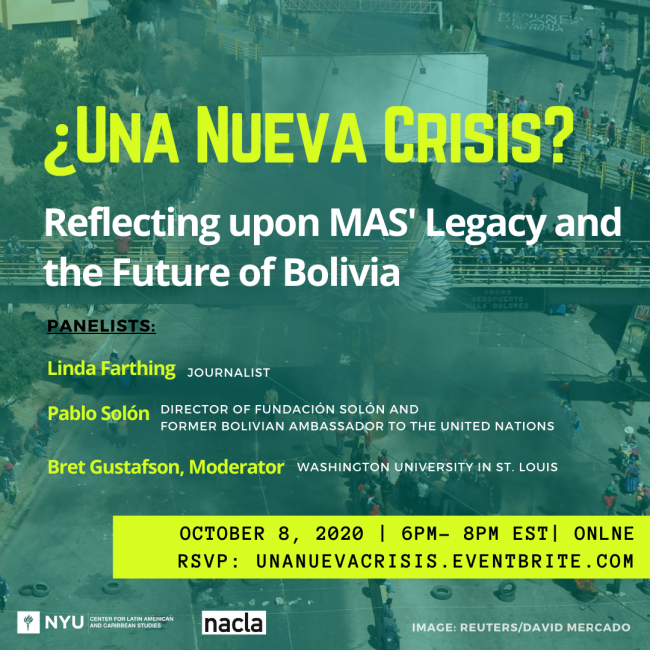 Linda Farthing is a journalist and researcher who has co-authored three books on Bolivia. She has written for the Guardian, the Economist, Al Jazeera, Inter-American Dialogue, and The Nation.

Pablo Solón is a social and environmental activist and former ambassador for the Plurinational State of Bolivia to the United Nations (2009-June 2011). As Ambassador to the UN, Solón spearheaded successful resolutions on the Human Right to Water, International Mother Earth Day, Harmony with Nature, and the Rights of Indigenous Peoples. He was the chief negotiator for Climate Change of Bolivia and helped organize the World People's Conference on Climate Change and the Rights of Mother Earth (April 2010). Solón was the Executive Director of Focus on the Global South in Asia (2012-2015) and currently is the Director of Fundación Solón - Bolivia.

Bret Gustafson (Moderator) teaches anthropology at Washington University in St Louis. He is the author of two books on Bolivia, most recently Bolivia in the Age of Gas.